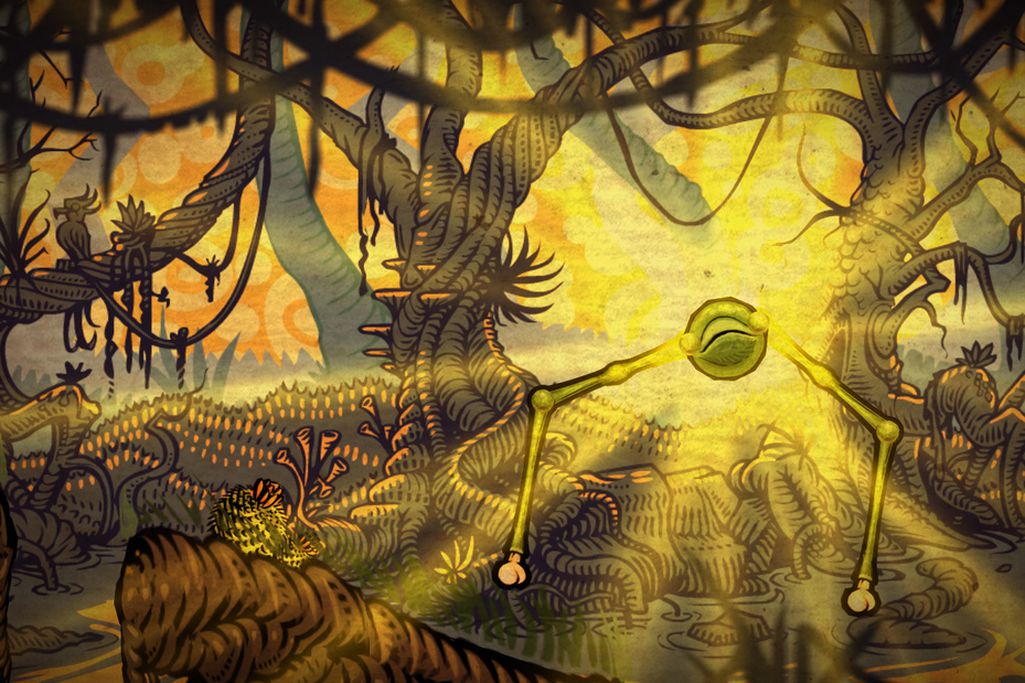 “This is me right now,” Colin Northway says, sending me a JPEG of a shirtless, barefoot man sitting in a deck chair hunched over a laptop, surrounded by trees. For the past two years Colin and his wife Sarah have been travelling the world — they’ve spent time in Honduras, the Philippines, Scotland, Greece, and plenty more, and currently they’ve settled in a small village in Mexico. But that time hasn’t just been spent exploring new cultures, it’s also been about making games. Sarah developed the zombie-themed strategy game Rebuild and its sequel, while Colin has been hard at work on Incredipede, a puzzle game where players control a strange creature with the ability to grow new limbs at will.

Unlike their previous destinations, Colin says that he hasn’t been able to explore much of Mexico just yet, as he’s been busy polishing up the game in time for its release later this week. "Still, it's nice to be able to unwind with a swim in the ocean,” he says. The couple had always loved to travel, spending large amounts of time in Thailand and Japan, but it wasn’t until the success of Colin’s previous game, Fantastic Contraption, that the two were able afford their current globe-trotting journey. The release of Rebuild helped to further fund their adventures.

Development on the road

Despite their unique situation, Colin says that travelling can actually be helpful when it comes to making games. "The trick is to spend a few months in one place," he say. "If there's always a train to catch and you're ticking off countries and cities from a list you'll never get any work done. But if you hang out in one place and put down a few roots you can be very productive. Sometimes it's easier to get work done while you're living in a little fishing village by the beach instead of in a big city with a ton of friends and stuff going on."

The various places they’ve been have also had a large influence on the direction that Incredipede has taken. The game puts players in the role of a creature called Quozzle as she attempts to rescue her sisters. The stages are generally quite short, but the challenge is in figuring out how to build Quozzle so that she can reach the beam of light at the end. You can add new legs (and legs on top of legs) as well as muscles for each limb, providing a near infinite number of solutions for each level — you can experiment with different ways to reach that cliff or roll down that hill, and sometimes you’ll even need to push or throw objects past the finish line. 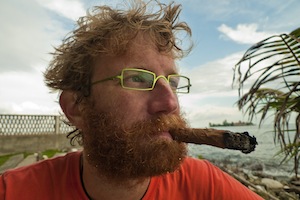 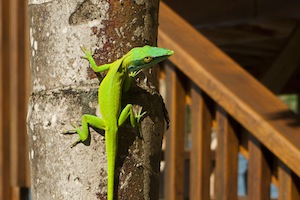 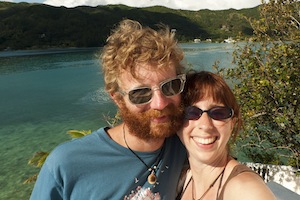 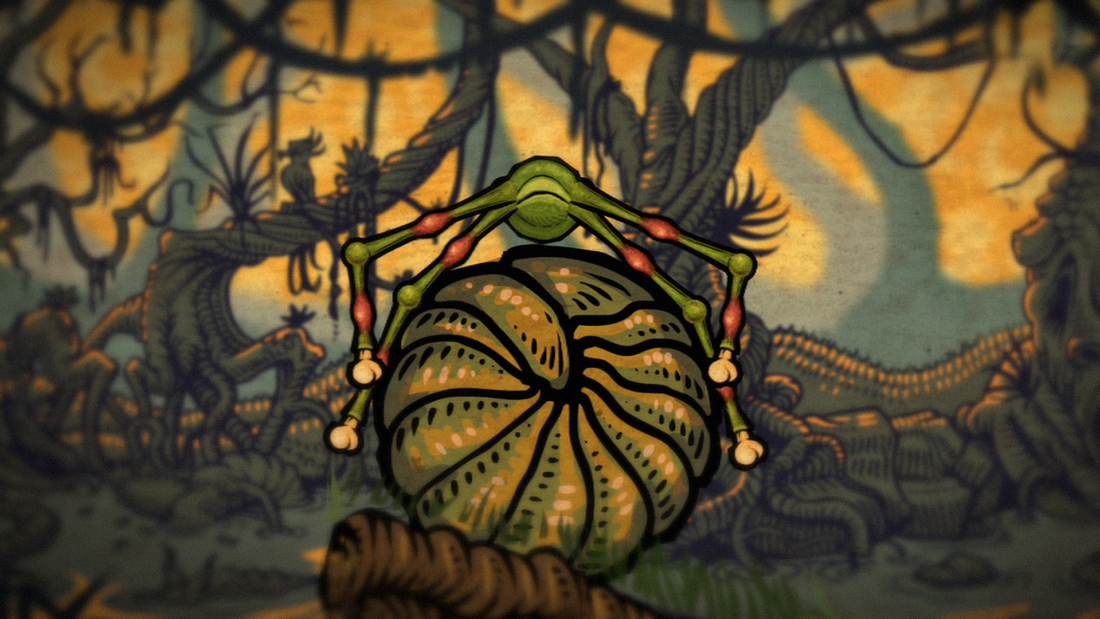 Prior to getting started on Incredipede, Colin had been working on another concept that wasn’t quite progressing the way he wanted, and it was his time in Honduras — particularly the lizards scuttling about the village — that inspired the initial concept.

"Incredipede could only have been born in Honduras," he says. "We were living in Honduras for a while in a little house slung out over the water with jungle all around us. We had to take kayaks to get groceries and went snorkeling on the reef every day. The amount of life in and around that house was astounding. My mum's a biologist and I've always been fascinated by life and how it works and is so varied. It's totally amazing. Honduras just thrusts it in your face all the time. Hummingbirds on the balcony, fish swimming under your feet, ants crawling into your kitchen, land crabs hiding behind the kayaks, birds eating holes in the papayas, snakes in the trees.

"Incredipede was just sitting there waiting for me. I had to make a game where you got to get your hands dirty playing with the wet sticky strings of life."

And the inspiration never really stopped. Colin came up with many of the elements for the game’s interface in Tokyo ("that city lives and breathes strong practical design"), and he settled on an art style while researching Central American colonization in Costa Rica. The story was inspired by life in Scotland and Thailand.

However, though he had a visual style in mind — "I wanted the game to look like a 1700s botany textbook" — Colin didn’t actually have an artist who he thought would be a good fit for the project. It was a source of some stress during the development process, but then he stumbled on someone who would be perfect for the role — and it was a complete accident.

While in the Philippines, Colin had come across an interesting looking spider, so he decided to do some research, which, inevitably, led him to Wikipedia. There he found a terrific photo of the creature and after doing a bit more digging he learned that the image had been captured by Thomas Shahan. And lucky for Colin, Thomas was an artist as well as a photographer. "I saw his illustrations and was struck: this is the guy, this is the Incredipede art style!" 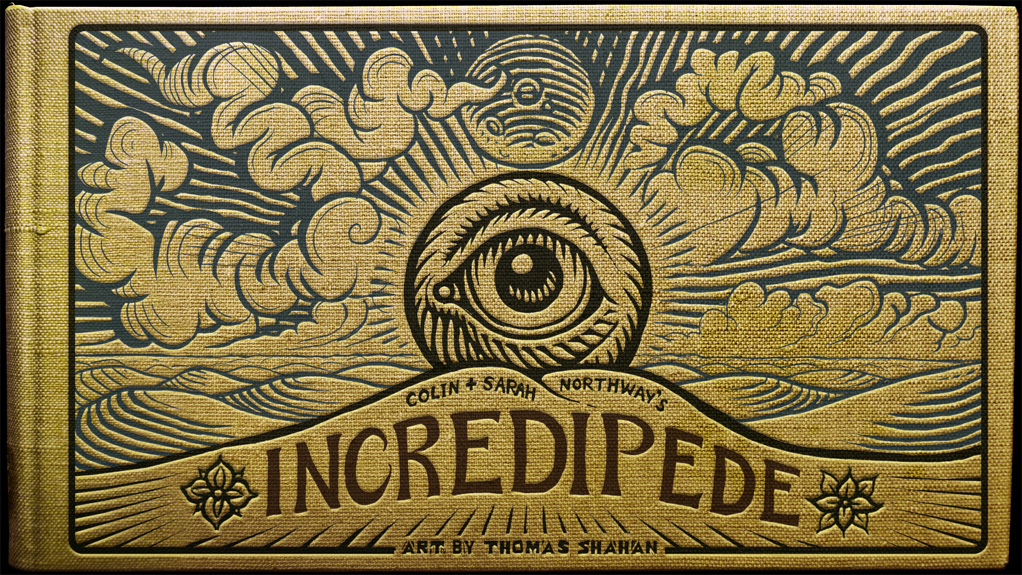 The complexity of simplicity 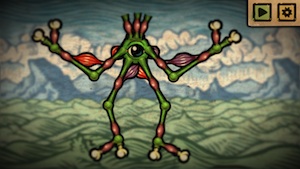 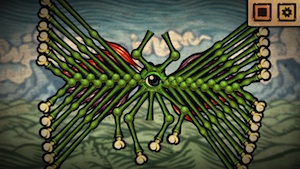 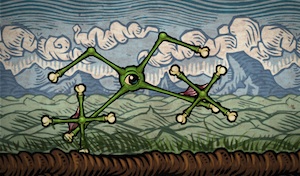 Shahan soon became part of the project, and Colin eventually enlisted the help of Sarah as well, to help with some of the coding over the last six months or so. Much of the time the game spent in development, though, was used to iterate on the design. Incredipede was once something much more complex — the creatures originally had nerves, for instance, which gave them a sense of touch and the ability to feel where their limbs were, a sense known as proprioception. This proved to be a bit too confusing, though.

"It's funny looking at the game now because it's so simple and straightforward," he says. "Of course that's how you do it. But it takes a lot of work to make something complex so simple." For Incredipede that meant a lot of iteration. "I playtest a lot so this whole process sort of went: try something out, get someone to play it, watch how they fail, take a long walk on the beach/canal/forest/village/mountain to have a new idea, try it out, repeat."

With the game nearly complete, Colin says that he’s feeling plenty of emotions given the amount of time and effort that was put into the game. That said, he’s confident that the game will find its audience. "I don't think it's for everyone but there are enough people out there with that special combination of imagination and desire to play," he says. And once the game is completed, he'll finally have time for more pressing concerns.

"I'd like to take a break after we release and learn to surf. After all, we're living on a surf beach for the next two months!"