After months of teasing a Windows 8 style version of Skype, Microsoft is finally delivering it on October 26th. Built from the ground up for Windows 8, Skype's latest client will also work on Microsoft's new Surface for Windows RT tablets — providing video and audio calling with messaging capabilities. I got a chance to take a look at the final version of Skype for Windows 8 ahead of its release on Friday.

"We've been relatively quiet since the acquisition," says Skype's Derek Snyder in a meeting with The Verge about Skype's latest changes. "We have been silently re-architecting basically the entire way Skype works." This change means Skype is moving away from its historic P2P service into a modern one ready for the mobile-based world. Skype is shifting to Microsoft's Messenger platform initially, designed with mobile considerations in mind.

"We have been silently re-architecting basically the entire way Skype works."

"For the last six months or so we have been moving people to the Messenger backend," says Snyder. "The big advantage there is that Skype doesn't always have to be running. It wakes up when it's time to deliver a chat message or call etc." The changes also mean that around 80 percent of all IMs sent on Skype are sent over the new Messenger backend. Skype's Windows 8 app is the first to take advantage of this new model, with updates coming to iOS and Android later to complete feature parity. 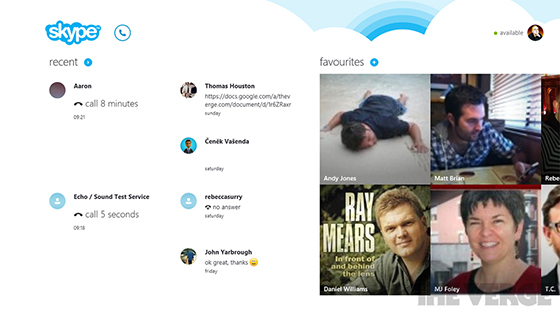 On first launch of the app, it's clear to see that Skype has seamlessly integrated the Microsoft account functions in Windows 8. If you've previously linked your Microsoft and Skype accounts then it will automatically sign-in providing you're using the same Microsoft account for your Windows 8 machine. If you haven't linked them then Skype for Windows 8 will prompt you to do so.

The interface is exactly what you'd expect from a Windows 8 style application. You can add contacts to the favorites screen, where they're displayed as large tiles. You're also presented with a list of recent conversations and calls to jump in and out of. Skype has implemented a similar list of recent activity in the App Bar option, available when you right click or swipe up / down in Windows 8 — this also provides access to add contact and save number options. One of the more confusing aspects to the UI is attempting to find the dialer for Skype, it's actually hidden as a call logo next to the logo which isn't immediately obvious.

I tested out group chats, video calling, and traditional audio calling with Skype and everything works as you'd expect. Skype has also built in SMS support to allow you to text your contacts using Skype credit. This works particularly well in combination with the People app integration, where you can SMS contacts or start Skype video and audio calls straight from your contacts. 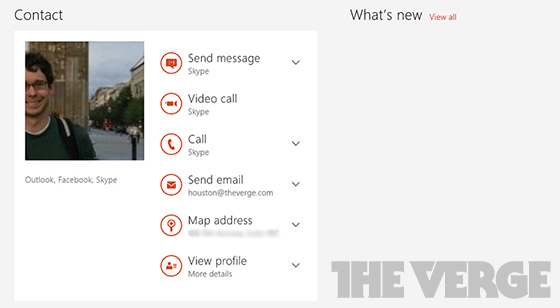 Snyder also detailed a new feature for Skype that will arrive this fall. Skype is preparing to update its range of clients to support a new video messaging option. iOS and Android Skype clients will receive an update to support the new feature that will let users send a prerecorded video message to contacts. It's not a huge feature, but it's a step further to Skype offering identical features to operator MMS services.

Overall the Skype app feels like one of the best Microsoft-built Windows 8 style apps right now. There's some useful options to control audio input and output, as well as the usual privacy controls. The app needs some improvements around the notifications experience and it would be great to have some control around this, but it's certainly more than I was expecting at this stage. Microsoft says the app will be available from the Windows Store on October 26th, alongside the launch of Windows 8.