Ceefax, the world's first Teletext service, will deliver its last page to the UK on October 24th

Share All sharing options for: Ceefax, the world's first Teletext service, will deliver its last page to the UK on October 24th

Before the rise of 24-hour networks and readily accessible internet access, bored television viewers in the UK seeking entertainment at 3AM would have to make do with Ceefax. The service was originally designed to offer subtitles on programs for the deaf and hard of hearing, but morphed over the decades into a fully fledged information service. Everything from weather listings to the latest news was served up, but viewers had to make do with excruciatingly slow load times and decidedly retro graphics thanks to the low bandwidth. The service will be turned off for good on October 24th as part of the analog-to-digital switchover, but the BBC has put together a short video detailing the history of Ceefax that may just stir some buried feelings for the service of old.

Update: The last update to Pages From Ceefax was made on the eve of October 22nd as planned, but the service ended on a melancholic note. 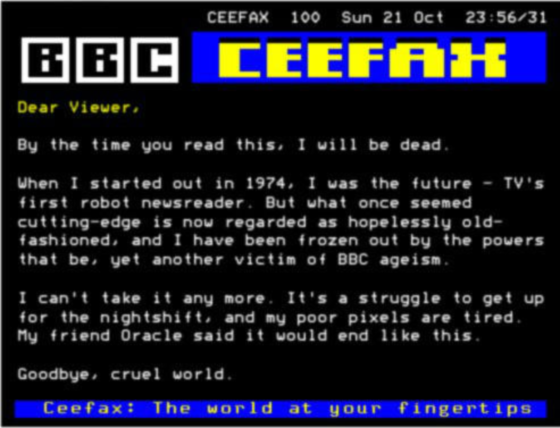