Facebook's second earnings report as a public company made a little progress toward mending its rocky relationship with investors on Wall Street, who have sniffed at the stock since it debuted at $38 and rapidly sank to half its value — but after its disastrous IPO, today's results were encouraging. The social network reported its numbers today for the third financial quarter, and came in at $.12 a share in earnings and $1.26 billion in revenue.

Analysts had been expecting an average of earnings of 11 cents a share on $1.23 billion in revenue, a slight bump up from $1.18 billion in the second quarter. So, like last quarter, Wall Street was slightly pessimistic about what has been called an overhyped stock.

The modest expectations weren't entirely Facebook's fault. Google reported a slowdown in advertising revenue, and Facebook's cash cow Zynga downgraded its outlook after it paid $180 million for the viral game Draw Something only to see the game wane in popularity.

Still, an enormous user base isn't enough to prove that Facebook is a viable business. Given the stock's poor track record, investors were looking for signs that Facebook is effectively monetizing its user base on the web as well as on mobile devices. For them, today's report of increased ad revenues will be welcome news. 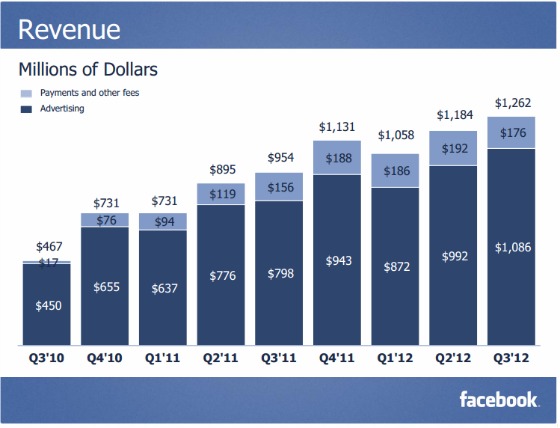 In the second quarter, Facebook booked an impressive $922 million in ad revenue. This quarter, the company pulled in $1.09 billion on ads, which accounted for 86 percent of total revenue.

In the second quarter, Facebook generated an average of $1.28 per user. That was up slightly to $1.29 this quarter. However, it's still way up from the second quarter of 2010, the earliest period for which Facebook has released that metric, when Facebook only earned $.94 per user.

According to an eMarketer analysis last month, Facebook's mobile advertising business trails both Twitter's and Google's, but Facebook is projected to overtake the second spot within two years. Average monthly mobile users were 604 million, a fact CEO Mark Zuckerberg boasted about in a press release, and 14 percent of third quarter advertising revenues came from mobile.

"People who use our mobile products are more engaged, and we believe we can increase engagement even further as we continue to introduce new products and improve our platform," he said.

Facebook has remained a controversial stock, with wide disagreement about its longterm viability. When it debuted on the Nasdaq exchange, it set a record for the highest volume of shares traded — meaning there were massive numbers of sellers and an equally massive number of buyers. But over the short term, at least, skeptics have driven the price down.

One factor contributing to Facebook's volatile price swings is that the company declined to release a preview of its earnings, leaving analysts to speculate without guidance from the company. The stock peaked at $19.80 today, and perked up in after-hours trading.

Facebook's ability to convert its social network into a moneymaker has wide repercussions for the tech industry, as startup investors watch closely, hoping to get a glimpse of their own future exits. The company's fate could therefore have an impact on younger startups that still need to raise capital.

But in today's press release, Facebook reminded investors that it is "deeply integrating monetization into our product teams in order to build a stronger, more valuable company." With new products like Facebook Exchange, which launched in September and allows advertiser to target users in real-time based on websites they visit, the company is hustling to find new revenue streams.