By the numbers: Apple's new iPad mini vs. the 7-inch tablet competition

By the numbers: Apple's new iPad mini vs. the 7-inch tablet competition

Apple's iPad mini has arrived. But unlike the company's original model, which soared to unrivaled success without much in the way of strong competition, the iPad mini enters a market with several entrants already competing for your hard-earned dollars. Google's Nexus 7 set the bar for what's possible at a price point of $199 and the Asus-branded Android tablet looks poised to maintain that price advantage over the $329 iPad mini for the foreseeable future. Even the $249 16GB configuration — rumored to soon be making a jump to 32GB — still undercuts Apple's baseline 16GB offering. Amazon's 7-inch Kindle Fire HD also bests Apple in pricing. With an asking price of $199 for the ad-supported version and an ad-free SKU available for $214, there's a clear disparity in pricing strategy between Apple and its competition. Will it be enough to sway shoppers one way or the other?

Will the basement pricing of competing tables cut into iPad mini sales?

And while the iPad mini features a larger physical display at 7.8 inches compared to its competitors, both the Nexus 7 and Kindle Fire HD pack more pixels into their smaller 7-inch panels. The iPad mini's resolution is 1024x768 whereas both Android-based devices offer sharper experiences at 1280x800. Resolution isn't everything though: among the primary complaints we've seen directed at the Nexus 7 pertain to its washed out display. Colors simply aren't often vibrant, and this is where Apple could potentially gain an upper hand. 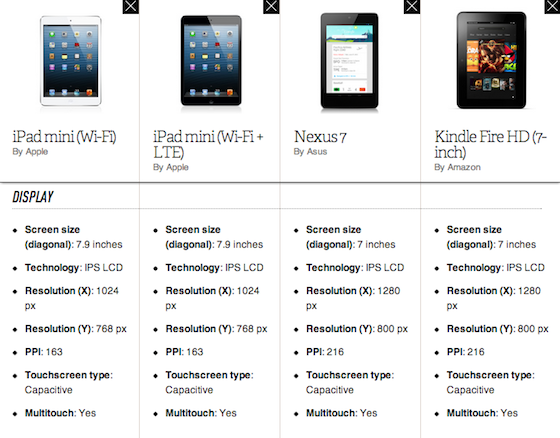 Another area where it seems (at least on paper) that Apple falls short is that of processing power. The A5 chip employed in the iPad mini first originated in the iPad 2 back in 2011. Still, it's worth keeping in mind that the smaller-sized tablet will be pushing far fewer pixels than the company's flagship iPad with Retina display. Combined with iOS' general reputation for responsive performance, we can't imagine the last-gen chip becoming a deal breaker for most. Yes, Nvidia's quad-core Tegra 3 is a worthy adversary, but whether it offers a compelling reason for the average consumer to pick Android over iOS is another matter altogether.

Apple did well in offering LTE to its customers

Apple handily surpasses its competitors when it comes to connectivity options. We can't count the number of times we've longed for some type of cellular networking in the Nexus 7 and the inclusion of full-blown LTE in the iPad mini is a luxury for certain — even if it comes at a premium.

Yet these conversations always find their way back to ecosystem and operating system preference. Is Apple's industry-leading App Store enough to guarantee your pre-order? Or, despite the iPad mini's sleek design, are you bored with what some consider a tired and staid design philosophy behind iOS? Perhaps you've already placed a pre-order for Microsoft's Surface. Whatever the case, feel free to opine on Apple's new iPad mini and other tablets below.

Check out the replay of our live coverage right here: