With iPad mini on the way, how is the Nexus 7 doing?

Google's tablet wasn't meant to play on Apple's turf, but it will now

Share All sharing options for: With iPad mini on the way, how is the Nexus 7 doing?

Few will argue that the iPad blazed trails at its 2010 introduction, but today's iPad mini is a slightly different story: it's coming to market as a fast follower, a direct response to the perceived success of smaller tablets like the Kindle Fire and, more recently, Google's Nexus 7. In reality, of course, Apple has likely been prototyping the iPad mini since long before the Fire came to retail — but that's of little consequence to consumers who've been seeing Amazon's tablets on shelves for a year.

In some ways, that makes for a more even matchup going into the critical holiday buying season: the Nexus 7 and Fire had a head start. And Apple enters the game at a fascinating time, because the small tablet market is anything but settled. On one end of the spectrum, the Fire range seems to have found its niche as a series of relatively affordable content consumption devices that start at just $159.

The same can't be said for Google's turbulent foray into tablets.

Android 3.0 Honeycomb and the arrival of Google's first officially-sanctioned Android tablets — devices like the Motorola Xoom — were intended to be direct competitors to the 9.7-inch iPad. They fell utterly flat at retail, and the arrival of the Nexus 7 atop Android 4.1 was seen both as a refocusing and a retreat: Google was going after a different market segment altogether. The Nexus 7 was seen as a more thoughtfully-designed Fire running stock Android, which immediately made it more appealing as a general computing device; it had access to Google Play, and it wasn't designed to live within Amazon's walled garden.

The iPad mini was only just announced today, but the rivalry actually goes back several months. The first definitive shot across the bow came on July 3rd, just days after the Nexus 7's unveiling at Google's annual IO developer conference, when Bloomberg ran a report stating that a "smaller, cheaper" iPad would be coming before the end of the year; WSJ followed the next day, pegging September production for a tablet with a screen under eight inches. It's no coincidence: in media circles, Apple is widely assumed to seed "leaked" details on occasion when it's looking to help set the tone of the news cycle. With a smaller iPad just months from availability, Cupertino likely didn't want consumers rushing out to buy one of the first decent 7-inchers on the market, and it presumably took action.

And now that the iPad mini is official, Apple has most certainly brought the fight back to Google, whether Mountain View is ready for it or not. Endless "Apple vs. Google" subplots aside, the comparison between the iPad mini and the Nexus 7 is an easy one to draw: both are rich with industrial design (unlike Amazon's units, which seem almost intentionally boring). Both have app stores bustling with activity. Both are bigger siblings of phones that run nearly identical software.

Is Google ready for this fight? Has the Nexus 7 built up enough of a head of steam?

Google — like Amazon and the Kindle Fire — refused to discuss the Nexus 7's performance in detail on its most recent earnings call, so we can't say for certain just how much of a bite into the sub-8 inch market the tablet has taken. "Our other revenue grew 73 percent year over year to $666 million, 52 percent quarter over quarter, and this driven by the Nexus 7 sales," was the extent of CFO Patrick Pichette's comments. As noted by GigaOm's Om Malik, analysts peg sales thus far at anywhere from the high six figures to around a million units. The Google Play store is out of stock of the $199 8GB model — just as it has been for much of the time since its launch — but there's no way of knowing how many Google has commanded Asus to make and how many of those have been sent to Google Play versus other retailers.

Akshay Kothari — co-founder of Pulse, whose popular news reader is found on both Android and iOS — couldn't comment specifically on the performance of the Nexus 7 at retail based on his app's stats, but speculated that it's probably done well. "The 7-inch device is a pretty unique device for someone who doesn't want to spend $500-plus [...] so I wouldn't be surprised if they were selling really well. We were also preloaded on the Kindle Fire, and those numbers look really solid as well." 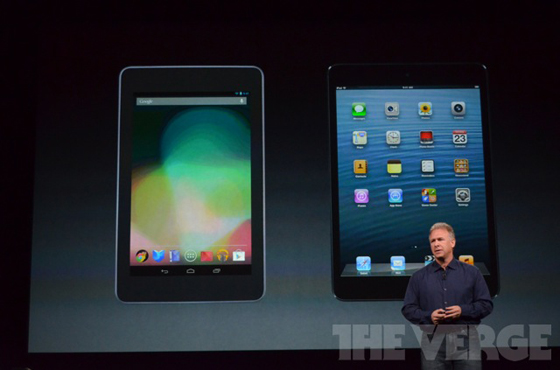 Pulse has seen a stratospheric rise in uptake of its Android app this year, Kothari says, and it's certainly possible that at least some of that growth has been driven by the still-nascent tablet market. "In general, our Android app continues to rise really fast, and in terms of sheer volume our Android apps are a lot more than what we're seeing on iOS."

Regardless of whether the Nexus 7 is a runaway hit, Google is showing no sign of relenting on its push to make Android just as much a tablet operating system as it is a smartphone one: it just published a "Tablet App Quality Checklist" for developers earlier this month, a show of recognition that there's still an extraordinary gap between the breadth, depth, and design of Android tablet apps versus iPad ones — and that won't get any easier for Google now that we know that the iPad mini has the same screen resolution and aspect ratio as the original iPad, instantly unlocking a huge trove of great App Store content.

Still, Kothari is optimistic for the fate of the Nexus 7 and Android tablets to come. "I absolutely think that the design direction for Android is beginning to take shape in the right direction. We've been out there for two years now, and a year ago there wasn't really an Android UI guideline... we didn't know what an Android app should look like. Now, they have a pretty good document in place, they do provide a lot of guidance to app developers."

And ultimately, the price gap between the Nexus 7 and the iPad mini — $130 in their base configurations — might leave room for Google's scrappy entry regardless. "I think getting a 7-inch device for $200 is actually a really good buy," Kothari notes.