The iPad mini's price is high, low, and everything in between

The iPad mini's price is high, low, and everything in between

Apple debuted the long-rumored iPad mini this morning, and per the norm for recent Apple product launches, the device was largely what we'd suspected. One question that had remained open, however, was the pricing: with competition from the likes of the Nexus 7 and Kindle Fire HD, would Apple feel compelled to match those devices on their budget-minded $199 price? We now know the answer is no — the iPad mini starts at $329 for the 16GB model, with pricing ramping up from there.

It's a 60 percent premium over the tablet's most direct 7-inch competitors, and a number that likely boosts the iPad mini out of the realm of the casual impulse buy. So what is Apple up to exactly?

"I think what Apple has done here is create a new category of premium small tablet," Avi Greengart, research director for consumer devices at Current Analysis, told us after the event. "I don't think it negates the rationale for buying a $199 tablet." Instead, it appears Apple is simply opting out of the low end of the market altogether, much like it's done with personal computers. "I don't think this puts Amazon, Barnes & Noble, or Google out of business, but it means that those three — and anyone else entering that market segment — are all competing against each other for the budget consumer." It's a classic Apple strategic move: entering a pre-existing market with a premium device, and banking on design and ease of use to take it to the front of the pack. It's the same strategy Cupertino used with the original iPod 10 years ago, which originally sold at $399 with a mere 5GB of storage, competing against much cheaper MP3 players.

Apple may be able to repeat that success

There's a lot about the iPad mini that suggests Apple may be able to repeat that success here. The App Store now boasts 275,000 apps built specifically for the iPad family of devices, and since the iPad mini shares the same screen resolution and aspect ratio as the iPad 2, it can take advantage of them right out of the box. It's a number Apple made sure to tout this morning — and one that no other tablet can come close to matching. Google may offer over 675,000 apps on Google Play, but the vast majority are phone apps that scale for the tablet form factor. In terms of materials and design, during our hands-on we found the iPad mini to be superior to any other small tablets on the market; the Nexus 7 and Kindle Fire HD feel like "toys" in comparison.

Pricing is a concern in the classroom

Still, there's no doubt the price of the iPad mini leaves the door open for competitors. Fraser Speirs, head of computing and IT at the Cedars School of Excellence in the UK, told us that the educational market — which Apple targeted heavily this morning with a new version of iBooks Author — can be particularly susceptible to pricing concerns. At Cedars, Speirs oversaw that first program to introduce iPads into the classroom on a one-to-one basis with students: each student would get their own device, rather than having them cycled from classroom to classroom. That doesn't mean Apple's products have become a shoe-in, however. "I think the sub-£200 price in the UK is keeping the conversation open for longer," he said (the iPad mini starts at £269, while the Nexus 7 starts at just £159). Those buying products for school, Speirs says, are "just thinking it's £159, and I can get 20 of them for the price of 18 or 17 iPads." 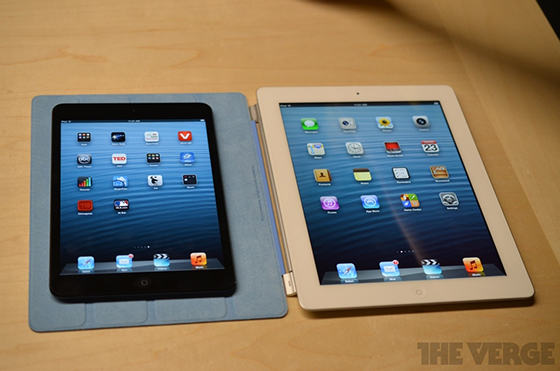 For regular consumers, the question of which iOS device to buy is muddled as well. In recent years, Apple has fallen into a steady strategy on pricing: offer an entry-level device, usually paired with meager storage, at an attractive entry-level price point. Consumers, looking for a bit more, are then encouraged to buy up higher into the product line. With the $329 pricing of the iPad mini, consumers could be encouraged to move in the opposite direction, foregoing the premium Retina-equipped iPad for the cheaper device instead. Of course, self-cannibalization of sales is not something Apple has seemed concerned with in recent years, with Walter Isaacson's biography of Steve Jobs noting that the former CEO even promoted the idea: "If you don't cannibalize yourself, someone else will."

Apple doesn't care what price point you come in at

Either way, Apple stands to have little to fear in terms of lost profits should the iPad mini chip away at the sales of higher-priced products. "By pricing it at $329 and ensuring they make a healthy profit, Apple doesn't care if they cannibalize their other products," Greengart said. It's the freedom provided by Apple's basic business model: hardware sold at a consistent profit margin — promoted by app and content ecosystems — rather than hardware sold at cost in order to promote an ecosystem. Apple doesn't care what price point you come in at, as long as you walk in the door.

Between the App Store, the familiarity of iOS, and the retail firepower of the brick-and-mortar Apple Stores themselves, Apple is betting customers will find a price point to their liking — even if it means paying a little more. It might be right; we'll have to wait until the iPad mini launches on November 2nd to know for sure.

R
Russell Brandom58 minutes ago
The US might still force TikTok into a data security deal with Oracle.

Turn anyone into a pokémon with this AI art model

Season 34 of The Simpsons kicked off on Sunday night with an opening credits “couch gag” based on the offline dino game from Google’s Chrome browser. Cactus, cactus, couch, d’oh! Perfect.