Almost one year ago Loren Brichter left Twitter, largely leaving the public eye "to figure out what's next." But before he left, he adapted his award-winning Tweetie to become Twitter for iPhone and Mac, and crafted the beloved Twitter for iPad. Brichter's user interface paradigms (like swipe-across menus and "pull-to-refresh") served as inspiration for popular apps like Path, and like Sparrow, which he advised until it was acquired by Google. "He has influenced the way apps are designed more than anyone I can think of outside Apple," Impending co-founder Phill Ryu says. Today, Brichter's back with a new word game for iOS called Letterpress. It's an amorphous Word With Friends, a Scrabble from the future for design nerds. Like the two aforementioned games, Letterpress is fun, and really addictive, blending the strategy of conquest board games like Reversi with the cunning of word games like Scrabble. But is it really what Brichter, the godfather of iPhone app design, has been working on for the past year?

"Twitter clients took up all my life, so I had this backlog of ideas and things to do, but Letterpress wasn't even one of those ideas!" Brichter told The Verge. "I started building a totally different game that I spent two months on — it was an arcade spaceship flying around thing," he says. "There was a ship and two thrusters: left and right." The game was nearly ready to ship, but during downtime, Brichter longed for a more casual and intellectually demanding game he could play with his wife. "I'm not in this to have a billion people playing it or to make a billion dollars," Brichter says. "My wife and I were out to dinner, both pulled out our phones since our table wasn't ready, and were both playing SpellTower at the same time. 'This is silly,' we thought. We should be able to play each other." Like his mentee Dom Leca, the founder of Sparrow, sometimes building an application simply comes from one's desire to fill a gap in one's own life. For Brichter, that gap was in the shape of a game he could play waiting for elevators, or for tables, or to fall asleep. 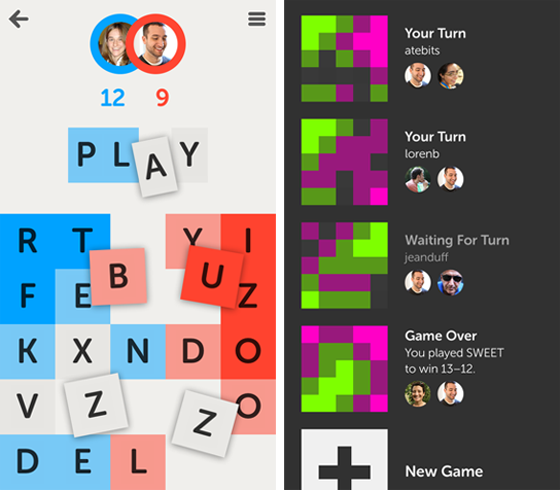 SpellTower is a beautiful and modern take on Tetris, but instead of clearing out rows of blocks, you clear out words using adjacent letters — striving for either a high score (Tower Mode) or the longest word (Puzzle Mode). "I was also hooked on Words With Friends back when it came out, but then I got tired of it," Brichter says. "I tried similar games but conceptually they were derivative, and at some point all my friends were better than me so it got tedious." In building Letterpress, Brichter knew he wanted to create a word game that didn't get boring, and that let players (like himself, perhaps) feel like they always have a shot to win. In Letterpress, you form words using letter pieces anywhere on the game board. Once you form a word, its letters turn blue. Then, it's your opponent's turn to make a word. You can steal letters your opponent has already used to flip them from your opponent's color (red) to blue, unless they've "blocked in" a letter using others red letters. The person with the most letters once all letters have been used wins. It's easy to learn, hard to master — as most great games are — a digital war of words mixed with the color wars of Reversi.

The game itself is 6,346 lines of code, far fewer than Brichter's last — Tweetie 2 — which exceeded 50,000 lines of code. Letterpress's interface is barren compared to most iOS apps, favoring natural-feeling animations at the expense of typical tricks like drop shadows, sliding menus, and panes that fold open. The game's color palette is attractive and minimalist, including just a handful of colors like red, blue, white, black, and gray. "I suppose it's an evolution of my own personal aesthetic," Brichter says, "but it's not 100 percent flat. If you look at Windows Phone 8's interface, which I love, everything is super flat. Here, if you tap a drag a tile, there's a drop shadow. You have the affordance of millions of years of evolution. Your eye has to pick up certain visual hints."

"I suppose it's an evolution of my own personal aesthetic."

Letterpress is free to play, but includes a 99 cent in-app purchase that provides colorful new themes, the ability to see previously played words, and most importantly lets you play more than one game at a time. "It's ironic that I would come up with a word game, given how bad I was at English in high school," Brichter says as he laughs. "But if it does turn out to be a new idea, that's pretty neat." We may have to wait a little longer for Brichter's next game-changing utility application, but Letterpress in itself is something of a serious accomplishment. The creation of a balanced game with rules, regulations, and goals doesn't happen everyday. Like with Tweetie, Letterpress mines an idea to its basest elements and presents them without visual clutter. Perhaps this skill is Brichter's real legacy.