In 2012 election, the meme factory hones its assembly line

In 2012 election, the meme factory hones its assembly line

From binders full of women to horses and bayonets, candidates find themselves navigating the first 'Meme Election'

About 100 people had gathered for a generously-catered, open bar party in the West Village offices of Livestream, which was co-hosting a viewing of the third presidential debate with Tumblr. The night’s official theme was "Live-GIFing the 2012 Debates," and, despite the free flow of wine, the audience was initially discouraged by the dry debate's dearth of meme-able moments.

The startups had commissioned six digital artists to live-GIF the debate. They sat around a table in the middle of the room, eyes intent on their screens, as they silently doctored and remixed the debate in real time. Large screens around the office streamed the infinite loops next to the candidates, making it difficult to follow the discussion about Syria without being distracted by Mitt Romney repeatedly smacking his lips or Barack Obama motioning over a crystal ball. By the end of the 90 minutes, the artists had produced 80 animated GIFs. 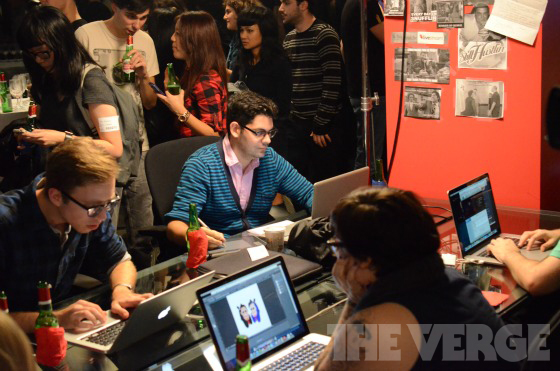 Artists commissioned by Tumblr create GIFs in real-time based on the third presidential debate.

"This debate was more serious, so it was harder to find GIF-able moments," said Dianna McDougall, a designer and social media consultant who served as one of the featured Tumblr GIF artists. Her career in live GIF-making started with the VMAs, when she discovered that instant GIFs tended to get instant traction. She also GIF-ed the last two debates. "People were picking it up, saying ‘wow, I don’t even have to watch,’" she said.

This presidential election takes place in a world where Twitter is more than 100 times bigger than it was four years ago and Tumblr is 77 times bigger. This election season, political junkies, bloggers, and voters have been watching the debates for viral material just as closely as political reporters watch them for headlines.

"You can't force a meme... if something has staying power, people will want to reproduce it."

"Meaningless internet points. That's all it is," said Abraham Riesman, referring to the phrase coined by now-notorious Reddit troll Violentacrez. A freelance writer and video producer, Riesman briefly captured the internet news cycle himself when a Houston news station mixed up his Twitter handle with that of a convicted rapist. 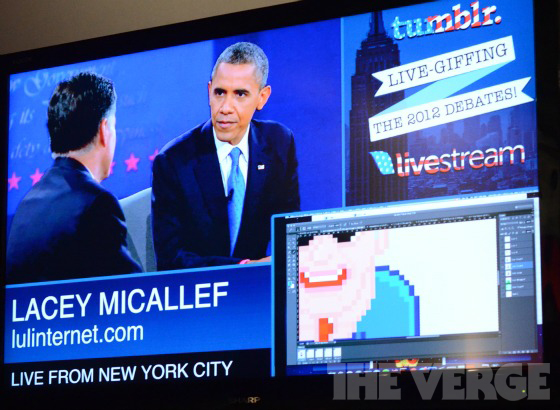 Political memes may have been around since the 1990s, but it's no surprise that the internet has accelerated the cycle. The 2012 election has prompted a flood unlike any election before, from "Obama eater of dog" to "binders full of women," but the outpouring of GIFs, images, and parody Twitter accounts feels a little forced.

At the most abstract level, a meme is an idea that spreads among people in similar cultural circumstances who repeat and modify it. Colloquially, they amount to inside jokes participated in by masses of people. These shared experiences can also be serious: one of the most impactful templates in recent memory was "I am the 99 percent," and its counterpart, "I am the 53 percent," a series of ordinary Americans holding signs that described their economic circumstance.

The outpouring of GIFs, images, and parody Twitter accounts feels a little forced

As memes got more popular, the term lost some of its definition. It once referred to the unique references jointly developed by communities, almost like creating a language; today, it's used to describe pretty much any piece of viral content, whether it's been reproduced or merely retweeted.

Most politically-themed memes spike after a few hours and decline, according to a 2009 academic study, while the stickiest ones may circulate for a week. But even if individual gags are making less of a splash, they are increasingly important in elections. Like the press, memes can reinforce or contradict campaign propaganda at zero cost. "While candidates have always worried about gaffes, this year’s nominees must navigate the first Meme Election," Ari Melber writes at The Nation.

"Politics has always been fertile ground for memes," Ben Smith, editor of BuzzFeed and former Politico reporter, wrote in an email. "I think in this election, the many Joe Biden memes — really driven by The Onion — have done more to define him than anything else." 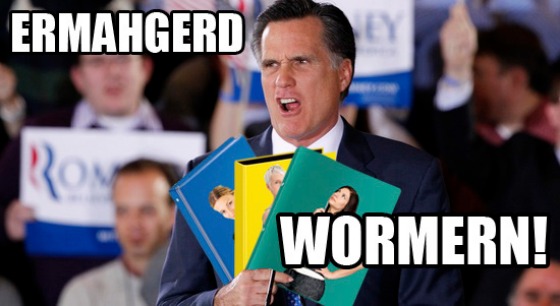 For most watchers, Romney’s line about "binders full of women" in the second debate melted into the rest of his answer, but enough irony-minded viewers picked up on it that it became an instant classic. It’s hard to imagine that the throwaway, out-of-context line would have been quoted in no fewer than 136,000 Google News articles if it hadn’t been so thoroughly mocked and illustrated first.

"The early signs of memes playing an influential role in elections definitely started with 2008," said Brad Kim, editor of the cultural encyclopedia Know Your Meme. Shepard Fairey’s "Hope" poster spawned a genre of derivative images, Kim recalled, although Sarah Palin’s powerful presence "was actually the driving force of internet memes in 2008," he said. Even before the general election, there was the famous "Dean scream," credited with cementing the impression that Howard Dean's candidacy was over.

"I like to use the term 'exploitable' for these things."

"It's not always the most substantial argument points," he said. "They always use the most exploitable. I like to use the term 'exploitable' for these things because that's essentially what they are. You just take a quote out of context and see how ridiculous it can sound and that trickles down through Twitter and gets instant responses."

It was about halfway through the third presidential debate, and viewers were starting to complain. "This #debate is turning out incredibly non-meme-worthy. Let's get it together, gentlemen," tweeted Jason Wheatley, a viewer from the swing state of North Carolina.

Not long after, bored viewers got their wish: Romney criticized Obama for having fewer ships in the Navy than under past presidents, and the president lashed back viciously. "Governor, we also have fewer horses and bayonets, because the nature of our military's changed," he said.

This animated GIF, created at the Livestream/Tumblr debate party, was shared 1,436 times.

"Thousands of people rushing to create HorsesAndBayonets dot tumblr dot com," snarked Gawker writer Max Read, who was already suffering from debate meme fatigue. "Obama Pulls Third Debate Out of Meme Recession with Horses and Bayonets," responded one of his followers. A few minutes later, horsesandbayonets.com and @obamasbayonets had been registered. The Obama campaign quickly snapped up the keyword "bayonets" for its Twitter advertising campaign.

The voluminous churn of election memes may be symptomatic of a larger trend: the general devaluation of the medium. The formula is well-established, and tools like Quickmeme and Cinegram make the things ridiculously easy to make. Profit-seeking outfits like BuzzFeed, which pursues viral content above all else, and networks like Cheezburger also encourage the creation of inorganic memes.

Election season won't be the end of it, Kim predicts. "I bet you anything that in 2016, there will be far more Olympics memes than this year," he said. "At the end of this debate, one of the quotes is going to become a meme. That's just how we expect things and how we interact with what's in the TV and what's in the news."