Nuance isn't shy about introducing multiple products beneath its Dragon brand of voice-powered services, and today the company is adding to the fold yet again with the beta release of Dragon Mobile Assistant for Android. The application is a rethink of Nuance's previous assistant app Dragon Go!, and offers users the ability to search for information, make appointments, and post to Facebook or Twitter by using voice commands. The app joins an increasingly competitive field, with both Google Now and Apple's Siri offering the same type of functionality (Siri, of course, is powered by Nuance technology, something you'll notice quickly when you hear Dragon Mobile Assistant's familiar voice).

We spent some time with the app, and found that it worked as we expected — voice recognition was accurate and speedy, and we were able to feed it commands in a much more conversational tone than is often possible with Google Now. Again, the implementation feels striking similar to Apple's solution — but it also provides some benefits Siri can't. Dragon Mobile Assistant can remain active in the background, jumping to life whenever you say "Hi, Dragon" — even if the phone is locked — which increases its utility dramatically. Of course, with the app constantly running in the background, Nuance does warn that battery life may suffer. 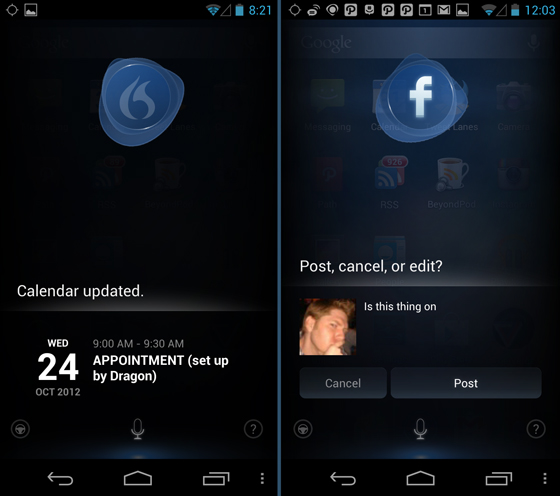 That's not to say the experience was perfect. Several common-sense oversights stuck out, including just asking the app what the time was. Rather then giving a voice response as expected, the app initiated a Google search with a screen full of results — hardly a useful solution if you're using voice commands to avoid fumbling with your phone in the first place.

Still, it's a useful iteration of Dragon's previous app that may be attractive to many users — and Nuance is promising that even more functionality will be added before the end of the year. If you'd like to give Dragon Mobile Assistant a try, it's available in the Google Play Store now, and will work with any device running Android 4.0 or higher. If you're an international user, however, you're out of luck for the moment: Nuance says the app is US-only for now.