With ARM, has Google’s cloud-based laptop finally found its soulmate?

People laugh when I pull the old Samsung Series 5 Chromebook out of my bag. I almost feel the need to apologize for it when I turn it on: “Here’s a $450 laptop that just browses the web. Sorry, everyone!” The big Chrome logo on the machine’s lid is a constant reminder to passers-by that I’m definitely not playing World of Warcraft (perhaps a good thing), using Spotify, or doing a Skype video call.

On some level, a chuckle is a fair response — the notion of spending several hundred dollars on a weakly-configured machine that won’t run your existing apps and can’t really do much of anything without an internet connection is a tough sell. But that’s not a new argument: Chromebooks have been in the market for over a year now, and people have been saying this since day one. Outside of Google I/O and the occasional press event (and my house), I’ve never seen a Chromebook in the wild; it’s not a very scientific study, but I suspect they haven't sold well.

But Samsung’s latest model could fix that. The new Chromebook capitalizes on ARM’s stratospheric ascent — both in popularity and horsepower — to extricate Intel from the machine, reducing cost, power consumption, and heat dissipation in the process. On paper, that sounds like a win / win / win. In fact, this new model is the first retail device to use Cortex-A15, ARM’s next-generation architecture that could prove to be one of x86’s most formidable competitors in the consumer PC space ever.

In practice, this Intel-free design means that it's light, fanless, diskless, completely silent, and at $249, cheap enough to grab your attention — even if you’re still skeptical (and understandably so) about the concept of a web-only laptop. But does it hit the magical sweet spot on the price-to-capability curve?

A new kind of Chromebook 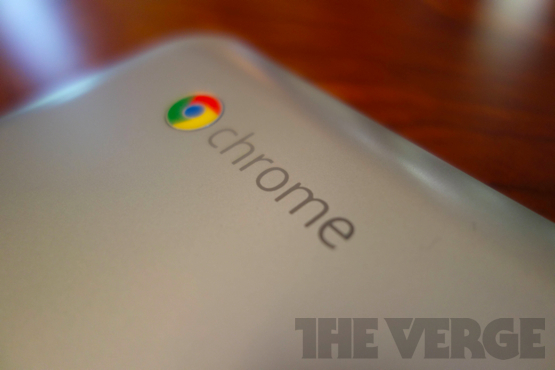 I think I've found the perfect phrase to describe the hardware: it's $1,000 worth of design made with $100 worth of materials. It's a nice-looking machine, probably the most attractive Chromebook to date, and it's light enough to be completely effortless to toss into a bag or tuck under your arm (at 2.4 pounds, it's almost a full pound lighter than its Intel-powered counterpart). And the silver color is no coincidence: squint your eyes from a distance and you could easily be fooled into thinking this is an aluminum laptop.

But it's not aluminum, it's plastic. That's mostly fine — you can't realistically expect a 2.4-pound, $249 laptop to be constructed of MacBook-esque unibody aluminum — but my unit does have an annoying creak in the right side of the wrist rest that makes almost constant noise while typing. I'm assuming this isn't a widespread issue, but it's something to look out for. It drove me nuts typing in a quiet room.

The trackpad is light years ahead of the terrible component that Samsung specced on the original Series 5 — smoother, much larger, and far more able to capture gestures like two-finger scrolling. It's a little loud when physically clicking, but like most trackpads, you can just tap instead of clicking if you prefer. The keyboard, meanwhile, should be an easy transition for anyone who's accustomed to chiclet-style keys.

I'm not in love with the port layout: everything is on the back except for the headphone jack, which is on the left side all the way toward the back. I'm regularly plugging things into my computers while I'm working, and putting the ports on the rear means you need to either stand up to look at what you're doing or lower the lid. The inclusion of USB 3.0 is a nice touch — overkill for a Chromebook, perhaps, but I'm not going to complain. 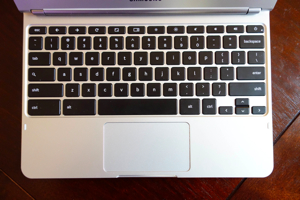 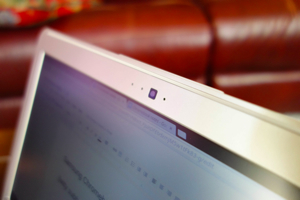 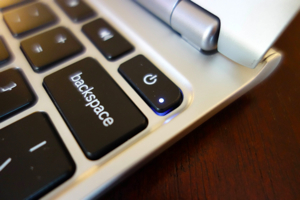 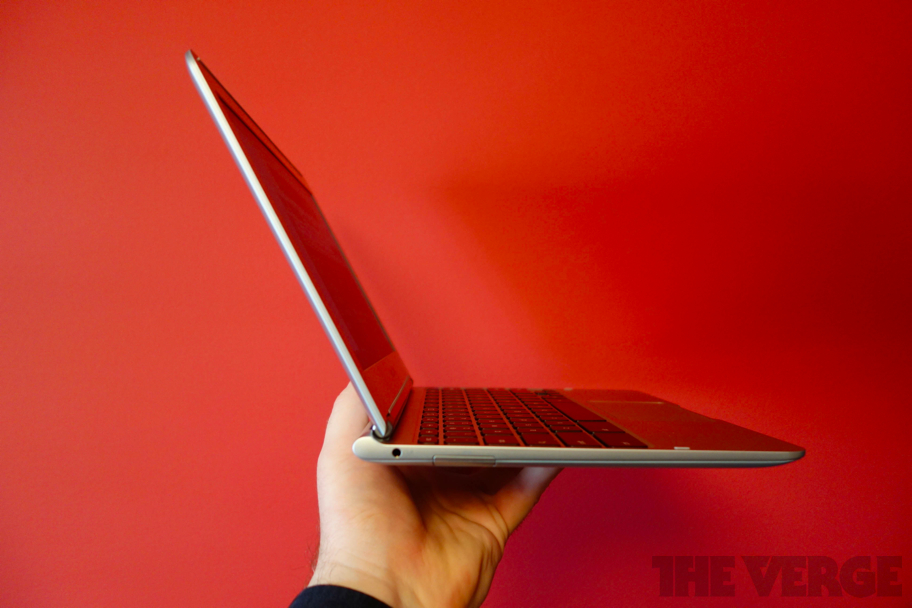 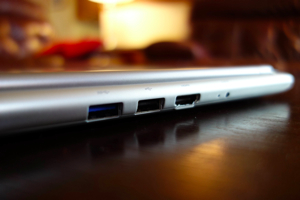 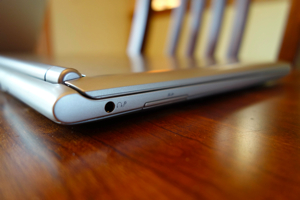 The 11.6-inch display seems plucked from the same parts bin as Samsung's other Chromebooks, albeit at a smaller size. Is that a good thing? That depends on who you ask. These machines use matte displays, which sacrifice some clarity and saturation to make sure you never need to see your own face reflected in the screen; the matte-versus-glossy battle is as old as time itself, and we're certainly not going to be able to settle it in this review. For casual browsing and Google Docs use, the display was perfectly usable.

Software-wise, the new Chromebook is no different from others, nor should it be: they're all just running Chrome OS, which is about as close to a blank slate as you can get. It's that simplicity, in large part, that makes it an appealing choice for low-end hardware — Intel Atoms, Celerons, and now ARM in the new model. The recent "Aura" update, launched on Samsung's Intel-powered Chromebook 550, works exactly the same here as it does on every machine dating back to the proto-Chromebook, Google's own nondescript Cr-48. Aura pulled back a tad from the strict interpretation of the web-only mantra by adding a dedicated taskbar along the bottom and a desktop of sorts; it's still very Chrome-centric, but it's a big improvement in appearance, organization, and usability over the Chrome OS of old.

So the question with the ARM-based Chromebook is not how Chrome OS looks and feels, but how it performs. Can it hang with the heavier, hotter, and more expensive Intel models? The short answer is "yes," but the bar was pretty low in the first place. The original Samsung Series 5 was never a solid performer and regularly stutters during scrolling and when changing tabs. The updated model — this year's Celeron-powered 550 — does better, but it can still grind to a halt under heavy loads. The new model clocks a SunSpider score of 704.1ms, compared to 950.8ms for the 550; for reference, I get scores of just over 200ms in Chrome on my Core i7-powered iMac (lower is better). From full charge to dead, I got 6 hours, 45 minutes of battery life, matching Samsung's claim of "over 6.5 hours." That's enough to comfortably make it from New York to LA, assuming you've either got Wi-Fi on your flight or you enabled offline mode in all of your Google apps ahead of time.

Of course, benchmarks can be deceiving, but in practice, I never felt like I was missing out on some vast reserve of Intel processing power — in fact, had I not known that it was an ARM chip, I would've never guessed. But that's not to say the new Chromebook performed well: there were numerous unexplained lockups throughout my testing. Cirque du Soleil's "Movi.Kanti.Revo" Chrome Experiment rendered the machine completely frozen for over a minute. Scrolling webpages quickly often resulted in the classic "checkerboard" pattern, the browser's way of telling you "hang on while I render this." Flash embeds — banner ads and the like — seemed a few fps behind where you'd expect on a full-fledged PC.

Our review of Samsung Chromebook (2012) 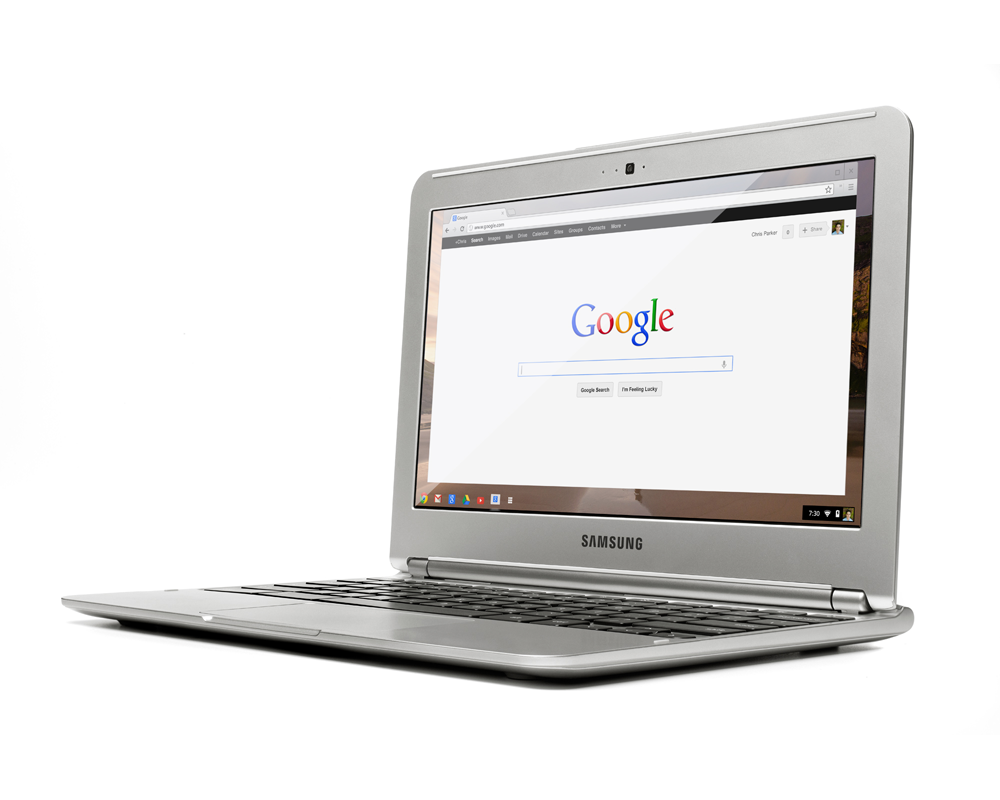 Basically, this Chromebook performed like a Chromebook. That’s bad news for Intel in this end of the market, because it’s proof positive that you don’t need Intel-grade muscle to effectively power this platform. It’s also bad news for anyone who was hoping that the Series 3 would mark some pivotal moment where Chrome OS’s performance suddenly matches that of Windows or OS X.

And yet, somehow, I can’t help but like it. I’ve always justified my irrational love of the Chromebook platform by pointing out that its limited capabilities make it the perfect device for writing with minimal distraction. There simply isn’t much to be distracted by: it’s just you and a poorly-performing web browser. You have little choice but to wait it out in Google Docs until the words come to you (coincidentally, that’s exactly how this review was written). At $350 or more, though, let’s be real: that’s an impossible argument to defend. At least $250 makes it less outrageous, particularly when you don’t seem to be giving up anything or making any appreciable sacrifices over the Series 3’s Intel-based counterparts.

If there’s any part of that unabashedly bizarre philosophy that sounds appealing to you, skip all the other Chromebooks: ARM is the processor architecture that Chrome OS was waiting for, and the Series 3 executes it very well.