Say 'buenos dias' to Languages, the first offline translator for iPhone that won't break the bank

Share All sharing options for: Say 'buenos dias' to Languages, the first offline translator for iPhone that won't break the bank

Translation apps are plentiful in the App Store, but few of them work offline. This means that industry-leading apps like iTranslate are great for learning new languages, but pretty bad at traveling with you to other countries where internet access is scarce. iTranslate developer Sonico Mobile gets it, so it called up Jeremy Olson, who won an Apple Design Award for his charming yet useful Grades app for students. A year and three months later, Languages was born. Unlike chief competitor Ultralingua, which offers languages for $19.99 each, Languages offers thirteen language pairs for just a dollar — but how? "We're going for volume," Olson says.

Premium offline translation apps have thus far been sold at premium prices — a huge barrier to entry for many consumers — since language databases are so expensive. "Data from iTranslate is one of our biggest assets," Olson says. "We're getting usage data about the most common words searched, which will help us figure out better translations. We're investing in creating the best language database in the world." So iTranslate and Languages are brothers in one family: one focused on translating phrases and lines of text for learners, and the other focused simply on delivering words instantly when you need them.

"We're investing in creating the best language database in the world."

Languages is deceptively simple looking, structured like iOS's Contacts app, but includes an omnipresent search bar up top. "We were pretty inspired by Clear," Olson says, "because it gets rid of UI and uses gestures. We tried to use those ideas but also make sure that everything was clear without having to use gestures." The resulting app is handsome, employing a simple and legible brown and black color palette, a search box, a button for flipping between two languages, and a button for choosing a new language. Unfortunately, the language book covers are undeniably ugly, but we doubt many users will be switching languages too often. 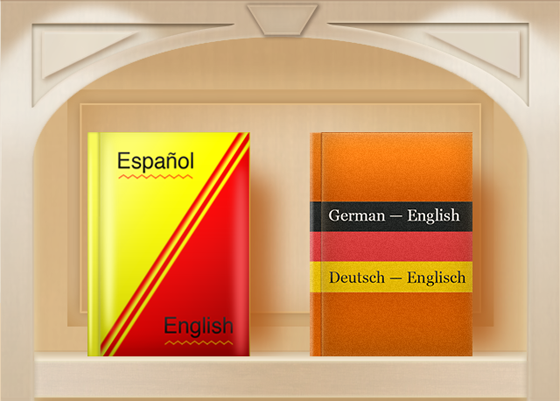 Once you've chosen a language, type in a word and definitions instantly pop up. Unlike its competitors, Languages returns results in both the "in" and "out" language, though the "in" language is highlighted and bolded. Thus, you can search for words in either language through the search bar. "We wanted this to be as language-agnostic as possible," Olson says. "When you're learning a language, you could be thinking in either language, so we made it so you don't have to think about what mode you're in." Ultralingua does include verb conjugations and a favorites menu, which Olson hopes to add, but the app is still considerably more expensive compared to Languages. The app also lacks voice input in any languages besides English (which comes with iOS 6), while will be a turn-off for some, but that's what iTranslate Voice is for, Olson says.

"One of the big lessons I took from Grades is to spend time on the little details."

Once you're thumbing through words and translations, one tap on a word conveniently prompts a "Copy" dialog, saving you from long-pressing (iOS's standard implementation) to achieve the same thing. Here too Languages is mindful of why you're using the app: if you're not reading off a result to a townsperson in another country, you're likely going to copy it into a text or email. If you're ready for another word, you can either tap the search bar, or swipe to the right to activate a Flipboard-esque animation to return to the previous screen and clear the search window. 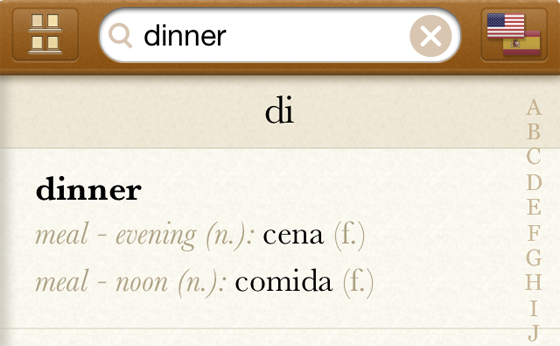 After winning one Apple Design Award, Olson hopes to someday win another. "One of the big lessons I took from Grades is to spend time on the little details," he says. "Apple loved how when you put in a syllabus item and change a [numerical] amount, a big number keyboard popped up instead of a normal keyboard." Olson doesn't know if he was first to employ a large numeric keyboard for entering amounts, but most apps now use one. And perhaps someday most apps will give up Apple's stock A to Z list for one like Olson's, which shows what letter you're pressing next to your finger as you drag.

At the end of the day, Languages is a minimalist offline translation app that doesn't attempt fancy features like voice translation and conjugation, since its sibling apps iTranslate and iTranslate Voice already offer those features. It's about providing lightning fast translations for words while you're traveling. "It's so satisfying," Olson says, "that this is something we're poured so much into but when you use it, you don't even notice the details. Within a few days we could have hundreds of thousands of people being helped by this thing every day, and the thought of that is mind-boggling."