Imgur upvotes itself as a social media destination for viral images

Imgur upvotes itself as a social media destination for viral images

With its latest update, a popular hosting site wants to become the YouTube of pictures

Imgur, the image hosting site originally built for use with Reddit, is taking its next step towards being a standalone destination. Over the next week, users will start seeing a new option while uploading files: "add to gallery." Selecting it will give the image a chance of appearing in Imgur’s Gallery, a privilege previously afforded only to pictures whose "virality" had been proven based on Reddit upvotes or Facebook "Likes." Other users, meanwhile, can sort through the Gallery to find the newest, most popular, or most highly rated images, whether they’ve been shared outside Imgur or not.

While highly popular, Imgur is known more for hosting pictures than curating themThe new system is part of what CEO Alan Schaaf calls a move to build up Imgur as a community. Though it’s been highly successful in its nearly four-year run, Imgur is known far more for hosting images than curating them. But since earlier this year, the Imgur team has been developing the site’s social capabilities, adding the option to reply to comments (previously called captions) and send private messages. Schaaf says that 60 percent of the site’s traffic still comes from external networks — primarily Twitter, Facebook, and Reddit — but that the Gallery now accounts for 30 percent. 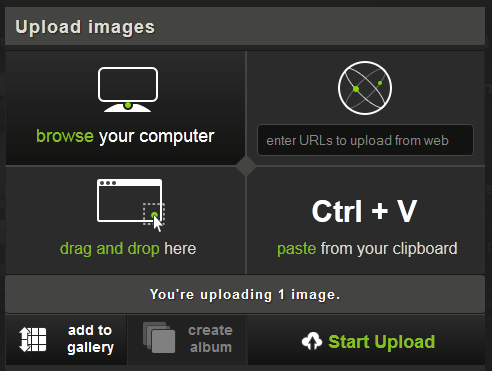 "There’s sort of two functions going on," he told The Verge. On the one hand, there’s the crowd from Reddit and other sites, who upload an image to share it outside Imgur. "That’s never going to change," he says. "It’s always going to be very friendly to Reddit." Meanwhile, a growing group of people are more interested in exploring within the site itself.

Not every picture will go to the Gallery. Imgur is still designed as an all-purpose site, and plenty of photos will remain niche or be shared only outside the site. But Schaaf hopes that when people upload photos, they’ll pick "a couple of really good images" for the Gallery. "The ultimate goal is to just provide the best possible platform for our community to share images with each other."