Share All sharing options for: Microsoft's Tami Reller on Windows 8, Redmond's 'most ambitious project' since Windows 95

In less than 24 hours, consumers will be able to purchase Windows 8 hardware from stores worldwide, marking the release of Microsoft's new touch-friendly operating system. The Verge got a chance to sit down and discuss Microsoft's big operating system gamble with Windows CFO Tami Reller in a mock family room full of Windows 8 devices at Microsoft's London offices, where Reller seemed genuinely excited about what Microsoft has achieved so far. "We do think it's the most ambitious project we've embarked on since 1995," says Reller. "We think it's the best Windows ever." Reller would say that though. Microsoft's vast Windows division has been working day and night recently to complete Windows 8 and ensure any last minute bugs are ironed out before the big day.

"...it's day one and things will build from there."

Try as it will, Microsoft can't write and fix every piece of software for Windows 8 — it really needs top apps to make this new OS work. "The submissions into the store have dramatically accelerated over the past couple of weeks because there's a lot of apps that do want to be there day one," explains Reller. "Day one is just that, it's day one and things will build from there." With no hints at any additional big name apps for launch, Reller says the company is processing new apps as quickly as it can. The need for apps is crucial for Windows RT and Surface RT in particular, due to the lack of traditional desktop app support.

The time for Windows Store app approval is a matter of days according to Microsoft, varying from app to app. "We're onboarding a lot of resources to condense down that time," Reller reveals. Despite Microsoft's early efforts, the Windows Store is bare right now and invite-only access for developers prior to September 1st may have played a role in that by preventing the masses from signing up. "We wanted to make sure that developers knew what they were getting into," Reller explains, noting that the invite system helped manage expectations. Microsoft isn't discussing exact app numbers right now, but it's safe to say there are around 5,000 apps for launch. 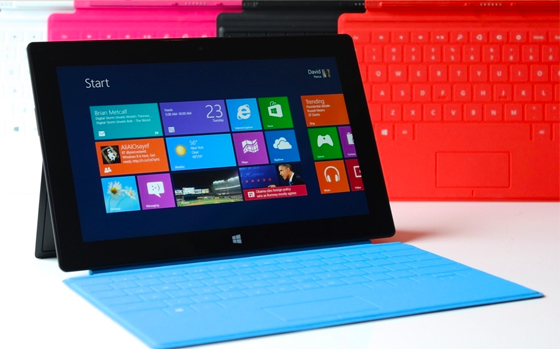 Clearing up the Windows RT confusion

Microsoft has been knocked for its mixed messaging on Windows RT recently, which is proving to be a source of confusion for some. "So for Windows RT devices at retail it will say [...] 'works exclusively with Windows Store apps, Office is included, and it is not compatible with your desktop applications and software,'" reveals Reller. We've seen parts of this messaging, but Reller says the company understands that it will require deeper explanation. Promising to provide that on Windows.com, Reller says Microsoft will also be clear in its PC selector and training. "We do have a 'not' in there that we felt was important to make sure customers understood."

Reller believes Surface RT will ultimately teach consumers about Windows RT. "I think it will help educate the market on exactly what does this deliver." There is also a promise of better marketing for Windows RT. "There will be advertising that's specific to RT devices," she says, explaining that there will be very specific signage to draw attention to Windows RT in stores. It might seem like a moot point, but it's important that Microsoft avoids any marketing mistakes and consumer confusion — especially around a holiday shopping season.

"It's not about the keynotes."

To address the app situation, Microsoft is also holding its BUILD developer conference on campus again this year. After trialing the intimate setting at a previous BUILD, Reller claims it's all about engagement. "We definitely have our full developer outreach team really focused in on making sure that our engagement with developers is very very strong, so there's a lot of energy that we're putting in it from a company." Microsoft expects to see the fruits of its labor from BUILD, as hundreds of software developers travel to Redmond to learn about the latest Windows 8-style apps. "It's not about the keynotes. The keynotes will be interesting, but it's about engaging with developers. That's why we're doing it."

I pushed Reller on the future of Windows and even Surface. Refusing to be drawn into the possibility of yearly Windows system updates, and rumors of new Surface hardware, Reller reaffirmed that Surface is a big step for Microsoft. "Lets just make sure we get it right, then we can go further," she says, a hint that Surface will play an important role in Microsoft's future. "We're focusing on getting that out of the door correctly, we'll leave it at that."

Ultimately, the success of Surface will depend on Microsoft and third-party developers building out the Windows Store. "Sure the total number does matter, I won't say that it doesn't matter," says Reller. "What we've tried to do is be very focused on making sure that our engagement with the developers is strong and they have the tools and engagement they need to build great apps." It's these great apps that Microsoft needs desperately right now. The clock is officially ticking.