Why is an ebook ever riddled with typos?

Why is an ebook ever riddled with typos?

Titles on Kindle, iBooks, and similar services have a dirty littlc sccrct

Maybe you’ve already heard this, but I recently got a Kindle Paperwhite, my first e-reader. This was a big deal for me, and a decision which involved a lot of hand-wringing. I’m a lifelong avid reader, book lover, and collector, so for me, reading isn’t just about inhaling information. I like the way books smell and feel, and I like physically turning pages. But when Amazon announced the Kindle Paperwhite, it seemed the right moment to me: e-readers had finally progressed far enough that I could feel something other than dread about owning one, and, at least for traveling, I thought I’d find it to be useful. Of course, I was still worried.

I’m happy to report that most of the things I was worried about aren’t as serious as I’d thought they might be. Sure, sometimes I miss holding a book, but mostly I’ve adjusted just fine, and have found that the conveniences of the Kindle far outweigh the relatively tiny (but nagging) preferences I’ve built up over many, many years of reading. In fact, my experience over the last three weeks has been far better than expected. Except for one thing: ebooks are apparently lousy with typos. This is not a minor issue, and it doesn't seem to be an isolated one, either.

Ebooks are apparently lousy with typos

Though I’ve only had the Kindle for three weeks, I’ve noticed that the book I’ve been reading, Foucault’s Pendulum, has many typos. This isn’t an out-of-copyright, cheaply made book from a fly-by-night press. This is marketed and published as a 2007 edition of the 1988 book by Mariner, an imprint of Houghton Mifflin. Its list price is $15.95, and it costs $8.77 on Amazon. Many of the typos — the letter "c" in place of what should be an "e" — appear to be the casualties of a hasty OCRing of some actual text of the work. OCR (Optical Character Recognition) is a process of scanning a book and using software which recognizes the scanned words as words, rather than merely as images, converting the images into text files. Anyone who has ever used OCR software knows that the process is far from perfect and always demands a serious attention to detail in the copy editing phase, once scanning is done, because the software doesn’t "read" the text perfectly. This seems to be at least partially what is happening in my Kindle edition of Foucault’s Pendulum, and it’s unacceptable.

I’ve found other typos in other books too, but statistics on this are hard to come by, and since I’ve only been using an e-reader for a few weeks, I don’t have much history to go on. But I’ve asked around a lot and everyone I’ve talked to since noticing this shocking fact has basically said the same thing: in their experience, they’ve seen more typos in ebooks than in their printed counterparts.

Now, I can tell you that typos in most mainstream printed books are fairly rare. Occasionally, I’ll see one, but rarely two: it’s just not that common. I’ve got a good number of old pulp fiction paperbacks at my house, original Philip K. Dicks published by Ace, and typos are sometimes more common in those, with good reason: they were produced on a smaller budget than the bigger, literary publishing houses were working with. In general, typos betray a hasty and cheap You enter and arc stunned by a conspiracy...editing process, and have historically been found in the less reputable, or less well-financed, companies. It has nothing in common with the quality of the work, but typos make the reader feel like the writer or publisher doesn’t care — which is pretty much rarely true, as far as I can tell. It also pulls you out of the story, drawing your attention to the typo, rather than the words: "You enter and arc stunned by a conspiracy..." But Foucault’s Pendulum is a major work by a living author, released by a major publisher. The publisher also undertook the lengthy and expensive process of having the book translated from Italian. And yet the ebook is riddled with issues: in the 90 or so pages since I started marking typos with notes, I’ve found 16; a cursory search for the word "arc" (instead of "are") turns up 18 examples, and as far as I can tell only three of them should actually be the word "arc."

To be clear, this isn’t exactly an Amazon problem: I bought the same book from iBooks and it reproduces most of the same errors (though not quite all of them, someone appears to have caught some). But, as the biggest player in the ebook game, it would be great to see Amazon be a leader here, and give publishers and readers alike better options for reporting and fixing issues with ebooks. Because I’ll be honest: this could be a dealbreaker for me. Oh, I know that Foucault’s Pendulum seems to be a worse case than most ebooks, but it is completely intolerable. 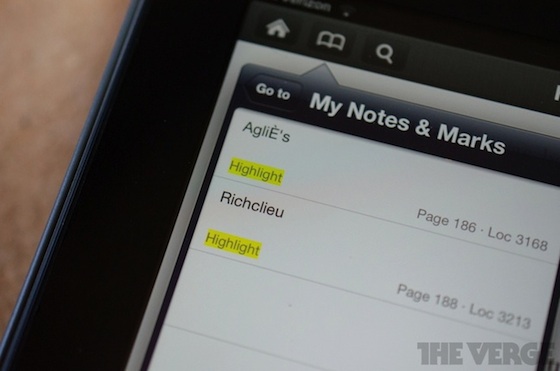 Now, I don’t have an insider’s perspective on ebook publishing, but my understanding (I’ve contacted both Amazon and Apple for comment) is that while Apple does allow publishers to push updates to their ebooks, Amazon does not, meaning that if there are typos in a work, they’ll always be there until a fully new edition is published. An Amazon spokesperson told me that readers can report typos in the "Feedback" section of a book’s details, but the only option is literally to report that a book "has typos." The Kindle app for desktop, the Paperwhite, and the Kindle Touch have the additional functionality of being able to highlight the word and specify the type of error, but it's unclear how those reported errors are dealt with. It seems that pushing updates to ebooks isn't a simple or quick process. Believe me, I’m dying to report specific typos, and I think this is one scenario where Believe me, I'm dying to report typoscrowdsourcing could be helpful, but so far, it’s just not happening. Amazon in particular, with its shared notes features, seems to have all the pieces in place which would allow some type of real reporting and correction system to work. This seems completely insane to me — the technology should allow us to move fairly quickly on pushing updates of minor typos for new purchasers of a book. This should be one of the great advances of ebooks: that if the printer makes a mistake, everyone doesn’t have to live with it until they sell through a million copies or whatever. Instead, I’m needlessly looking at typos that surely thousands of other people have seen in the past few years, and which Mariner is certainly aware of at this point (I’ve emailed them for comment). Apple’s recent announcement of a new version of iBooks seems to include better options for publishers to push updates to their ebooks, and this is a start.

The reality is, however, that publishing is changing very fast, and to keep up with that pace, publishers are moving quickly to get their books into stores like Amazon and iBooks. That’s great, I want as much content available as possible. But I also demand, and believe that all readers should demand, the high quality that book publishers have always offered to their customers. We can assume that this won't be a problem with most new books, because printed and digital versions will be created simultaneously from the same master text... unless publishers actually get lazy. But most books aren't brand new, and if the convenience of an e-reader must bring with it an acceptance of shoddily produced and edited versions of books, then count me out.

This article has been updated to clarify the typo reporting process based on a conversation with Amazon.