Surface orders delayed in the UK, Microsoft hands out £50 store coupon as a peace offering

Share All sharing options for: Surface orders delayed in the UK, Microsoft hands out £50 store coupon as a peace offering

Microsoft's Surface launch may have gone smoothly in New York, but orders across the pond in Britain aren't going as well. The software giant has been unable to ship units to customers in the UK on time, and several readers have contacted us to let us know that deliveries have not arrived. Microsoft did previously warn customers that Surface would be delayed until November 2nd in the UK, but the company later claimed that was a mistake. It appears the Surface units are being dispatched today, but they won't be delivered until early next week.

Microsoft is providing a peace offering to pre-order customers in the form of a £50 ($80) coupon to spend at its online store. It's not quite a refund of sorts, but it cushions the blow for disappointed Surface customers in the UK. We've reached out to Microsoft for further information on the Surface delivery delays and we'll update you accordingly when the company returns out request for comment. 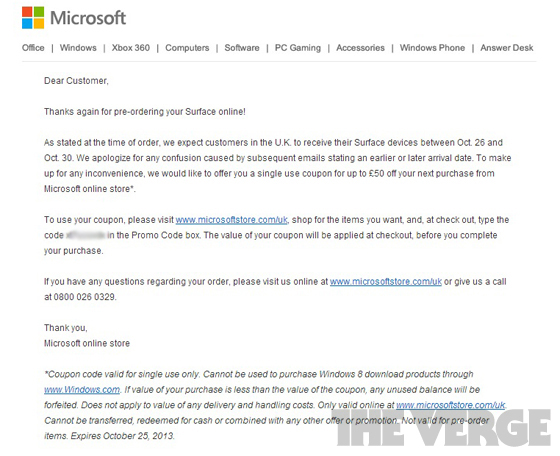