Christened "Venus" after the Roman goddess of love and beauty

Steve Jobs's yacht is making what looks to be its first public appearance in the Dutch city of Aalsmeer, a bit more than one year after his death. The photographs first appeared on the Apple news site One More Thing and closely resemble the description given by Walter Isaacson in his Steve Jobs biography.

After our omelets at the café, we went back to his house and he showed me all of the models and architectural drawings. As expected, the planned yacht was sleek and minimalist. The teak decks were perfectly flat and unblemished by any accoutrements. As at an Apple store, the cabin windows were large panes, almost floor to ceiling, and the main living area was designed to have walls of glass that were forty feet long and ten feet high. He had gotten the chief engineer of the Apple stores to design a special glass that was able to provide structural support. By then the boat was under construction by the Dutch custom yacht builders Feadship, but Jobs was still fiddling with the design. "I know that it’s possible I will die and leave Laurene with a half-built boat," he said. "But I have to keep going on it. If I don’t, it’s an admission that I’m about to die."

One image clearly shows "de vries," one of the two shipyards that make up the Feadship custom yacht building company, while another tells us that the yacht is christened "Venus," the Roman goddess of love and beauty. The ship builders were each gifted an iPod shuffle with the ship's name inscribed on the back, along with a note thanking them for their "hard work and craftsmanship."

Jobs's family is reportedly on-hand for the unveiling of the superyacht that One More Thing says features a lightweight aluminum exterior measuring up to 80 meters long. Another image shows six of the seven 27-inch iMacs found in the ship's interior, reportedly designed by Philippe Starck. The backside of the iMacs are also visible in the wheelhouse in the video above. 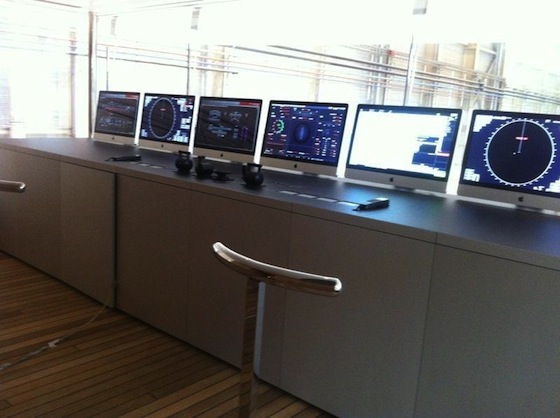