Livescribe’s basic sales pitch is simple, and it's never really changed. The company sells pens that record audio as you write notes, and syncs the two together so you can go back and tap on a note or drawing and hear what was being said at the moment you were writing. It's a great idea, but Livescribe’s problem has been its implementation: the company’s always had clunky apps that require you to constantly plug in your pen, makes you buy specialized (and expensive) notebooks, and hasn’t provided good tools for managing your notes. But that's all changed.

The company's newest pen is called the Sky, and the only thing different from the year-old Echo is the Sky's built-in Wi-Fi radio. But Livescribe has also ditched its proprietary desktop software, instead opting to make Evernote the back-end for everything Livescribe. The combination of new hardware and new software makes for a better, easier, more powerful Livescribe experience.

When you buy a Sky, part of the setup process involves either signing into your Evernote account or creating a new one. (You basically have no choice but to use Evernote if you want to use Livescribe.) The whole setup process has been simplified — it only takes about two minutes to get connected. Then you connect your pen to your Wi-Fi network, tapping out your password using a set of stickers on the inside cover of the new Livescribe notebooks. That part’s a little clunky, but you shouldn’t need to do it very often.

Livescribe's shtick gets a 2012 upgrade

In exchange for a few minutes of setup, you get a much simpler and better experience afterward. On previous Livescribe devices you had to manually sync your notes by connecting the pen to your computer, and you had to manage them all within Livescribe’s apps. Now everything happens wirelessly, and it all happens within Evernote — you get an Evernote notebook for each Livescribe pen, but of course you can organize your notes as you like. The pen syncs automatically every hour or so, but you can also sync it manually; if I told it to sync and then opened Evernote on my computer, my notes were almost always there waiting for me.

Syncing is automatic, and insanely simple

I asked Livescribe CEO Gilles Bouchard why the company chose Evernote rather than building its own apps — picking a third party as your back-end seems like a risky move. Bouchard told me Evernote is a powerful, mature platform with a lot of existing users, and more importantly it’s cross-platform. Making all your Livescribe notes available wherever you are is a big part of keeping the company relevant going forward, and Evernote gives Livescribe a useful syncing partner from day one. Livescribe also gives Evernote a platform it didn't have: analog, pen-and-paper notes. This is a lot more powerful than the Evernote Smart Notebook.

The new Evernote-based Livescribe experience is mostly a good one — Evernote’s character recognition and in-line image displays are perfectly suited for this type of notes, and it’s great to have both your page of notes and the corresponding audio in one place. The only awkward part of the integration is when you want to interact with your synced notes by clicking on a part of the screen to hear the corresponding audio. Evernote can’t do that, so you get booted to an HTML5-capable browser page — the page worked fine on every device I tested, but it’s clunky to have to leave Evernote.

The note-taking experience is the same as always. The pen is a little chunky, it's still battery-powered (Bouchard said it will last a full day of note-taking), and you'll still need special paper to make the whole system work. I got used to the pen pretty quickly, though, and having to use Livescribe's notebooks is a relatively minor inconvenience. 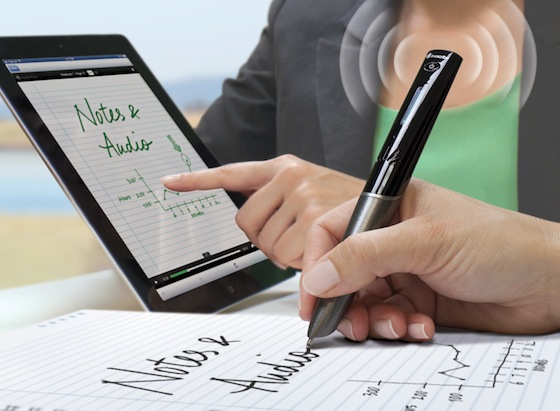 The Sky is available today, starting at $169 for 2GB of storage. You can buy 4GB or 8GB models for $199.95 and $249.95 (the latter comes with a professional folio notebook), but thanks to the wireless syncing you shouldn’t need much local storage. You also get 500MB of extra monthly upload bandwidth to Evernote with your pen (Bouchard estimates an hour of Livescribe notes is about 10MB).

It’s the best Livescribe tool ever, by a long shot, making your analog notes digital in a really useful way. I hate nothing so much as transcribing entire interviews or digging through meeting notes just to find the one thing I needed to remember, and spending a couple of weeks with the Sky showed me a future where I’ll never have to again.