From tweets to SMS to data dumps, social media goes broad and deep in a disaster

If you’ve been following Hurricane Sandy closely, you’ve probably gotten information the same way most of us do: through a combination of eyewitness information on Facebook, Twitter, or Instagram and official reports from news outlets. But it’s also likely you’ve seen a livestreamed press conference from Mayor Bloomberg, followed the Mayor’s Twitter account, or taken a look at the WNYC and Google Crisis Maps, both of which were powered by information from New York’s Office of Emergency Management (OEM). It’s part of a renewed effort by NYC’s government to turn the data that’s accumulated every day into a comprehensive source of public information.

"The more information people have and the more they feel they’re being listened to, the safer they feel."

In recent years, New York’s administration has emphasized both social media and raw data distribution, reasoning that it can reach more people by packaging what it’s collected for enthusiasts to work with than trying to develop everything on its own. "We are sharing as much information as possible," says NYC Chief Digital Officer Rachel Haot, "so [the open data community] can help disseminate it and apply it." Outside emergencies, this strategy is most visible in the Metropolitan Transit Authority, which releases subway data in an open format and encouraged app development with a contest earlier this year. For Hurricane Sandy, Haot has also been centralizing Twitter and other media accounts, making sure consistent information goes out across the board. It’s something that wasn’t yet in place for Hurricane Irene, which swept the Eastern Seaboard during Haot’s first year in the newly-created CDO position. This information has always been disseminated, but now it’s going out directly — not just through the media channels that have temporarily lifted their paywalls ahead of Hurricane Sandy. 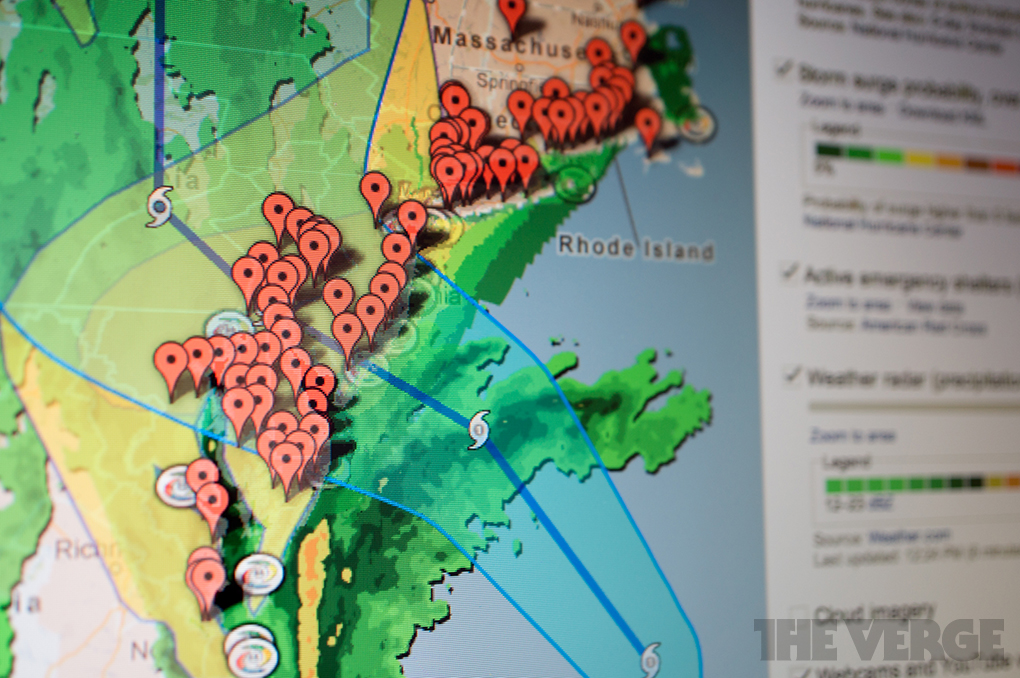 Twitter, Haot says, is particularly important: it’s a way for citizens to get micro-updates and responses to their questions. "The more information people have and the more they feel they’re being listened to, the more comfortable they are and safer they feel." English speakers can visit @nycmayorsoffice, while Spanish speakers are directed to @nycgob, and Twitter will be promoting tweets with information about the hurricane, making it more likely that people who don’t follow the Mayor’s Office will get information. The plan echoes the postal code-based Lifeline system Twitter is deploying in Japan, but without the location-specific data used there. Communication between people and government also goes both ways. "On Twitter and Instagram," says Haot, "there’s incredible documentation happening across the various boroughs that helps us to better allocate resources... We get a lot of information that previously wasn’t there." Users aren’t just pleasing their followers by posting pictures of flooded streets — they’re telling the city where there’s trouble.

"On Twitter and Instagram, there’s incredible documentation happening... We get a lot of information that previously wasn't there."

This increased new media communication is generally great news. But if you haven’t made the jump to a smartphone (as about half of American phone users still haven’t), don’t have steady internet access, or are affected by a hurricane-induced blackout, the benefits may seem academic. When a certain amount of the population has adopted new technology, there’s a tendency to forget about the people who don’t have access to it. Haot tells The Verge that the administration is doing its best to avoid this. Users can follow the emergency Twitter feed through SMS by texting "follow NotifyNYC" to 40404, and certain text alerts are sent to everyone in a given area, regardless of whether they’ve signed up for the service. The FCC has urged people to use SMS during the hurricane, as it can be more reliable than voice messages and remains available even when power is down. Police and Housing Authority volunteers, meanwhile, were sent out to alert people of evacuations and reach out to the homeless population.

It’s hard to say whether the current system is leading to better evacuations and preparedness, but Haot tells us reactions to a bigger new media presence have been positive. Even when the information isn’t too different from what you’d see elsewhere, it provides a direct link between citizens and government. People "feel informed," she says. "They feel clued in, they feel like people will get back to them if needed." And if Hurricane Sandy is as bad as predicted, responsive city governments will be badly needed in the coming weeks.