Google's new Nexus 10 vs. the competition

Google's new Nexus 10 vs. the competition

Google unveiled the Nexus 10 today, its first 10-inch Nexus device. The new tablet runs Android 4.2 Jelly Bean, Google's latest mobile operating system, and comes with some of the most cutting edge hardware ever seen in an Android tablet. Unsurprisingly, Google has given the Nexus 10 has a super aggressive price point to go along with its high-end specs. But with the large tablet space getting increasingly competitive, how does the Nexus 10 stack up to the competition?

The standout feature of the Nexus 10 is most certainly its 2560 x 1600 pixel Super PLS display. At 300ppi, the Nexus 10's display is denser than the screens on the fourth-generation Apple iPad, Amazon Kindle Fire HD 8.9, and Microsoft Surface. In order to push such a high-resolution display, the Nexus 10 is equipped with a new ARM Cortex-A15 processor and quad-core Mali T604 graphics processing unit. Camera-wise, the Nexus 10 keeps up with the new iPad on paper, with its 5-megapixel rear sensor and 1.9-megapixel front shooter. 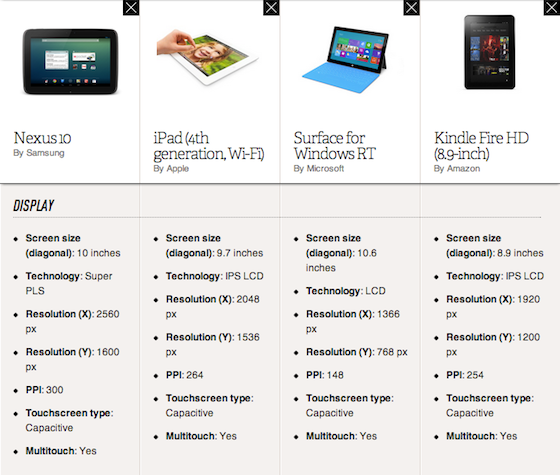 The Nexus 10's new software features a new user account option that lets multiple users customize the tablet to their own needs without disrupting other users that may have access to it. This is something that many have wanted on the iPad for a long time, and it's a bit surprising that it has taken Google this long to fill this niche. Unfortunately, the Nexus 10 still has to contend with the lack of proper tablet apps available for Android, which are only exacerbated by the tablet's larger display.

The Nexus 10 certainly has the specs to compete, and at a starting price of $399, it also undercuts most of the competition. But, Android tablets in the past have struggled despite having high-end specs, so it remains to be seen whether or not the Nexus 10 will be able to go toe-to-toe with the best tablets on the market.

Compare this: Nexus 10 vs. iPad vs. Surface RT vs. Kindle Fire HD!