Nexus 4 and Windows Phone 8X vs. the rest

Nexus 4 and Windows Phone 8X vs. the rest

Hurricane Sandy may have stopped Google from holding its planned press event, but that didn't stop the company from announcing a bevy of new products, perhaps the most noteworthy of which is its oft-rumored Nexus 4 flagship smartphone. Simultaneously, Microsoft formally launched Windows Phone 8 and fully unveiled its flagship HTC Windows Phone 8X, which will be pitted right again Nokia's Lumia 920. Add in last month's launch of the Apple iPhone 5, and each of the big three smartphone operating systems has brand-new flagship hardware for the holiday season. Most of us can only afford one of these phones — let's break down the plusses and minuses of each.

Top of the line phones should have matching internals, and none of these phones skimp in that respect. The Windows Phone 8X and Lumia 920 both share a Snapdragon S4 dual-core processor clocked at 1.5GHz with 1GB of RAM, while the Nexus 4 counters with a quad-core variant of the same processor with a whopping 2GB of RAM. The iPhone 5 brings the latest Apple-designed, Samsung-manufactured chip known as the A6. While it doesn't match the other phones in terms of sheer clock speed, it has proven to be a seriously capable performer. At the end of the day, users shouldn't be feeling constrained by the guts in any of these new phones.

Perhaps even more importantly than what's on the inside is the display — the key part of the phone you'll be interacting with every single day. Fortunately, each phone has an upgraded display over its predecessor. The Nexus 4's 1280 x 768 display is slightly bigger and has a slightly higher resolution than last year's Galaxy Nexus, while the iPhone 5 finally saw its screen size hit four inches, with a corresponding vertical resolution increase to 1136 x 640. Fortunately for WIndows Phone fans, Microsoft's new mobile OS now supports resolutions far in excess of the 800 x 480 that Windows Phone 7 was limited to — the HTC 8X has a 4.3-inch screen with a 1280 x 720 resolution, while Nokia's Lumia 920 features a 4.5-inch, 1280 x 768 display. The 8X may win on pixel density, but all four phones feature truly stunning displays where you'll barely be able to discern individual pixels. 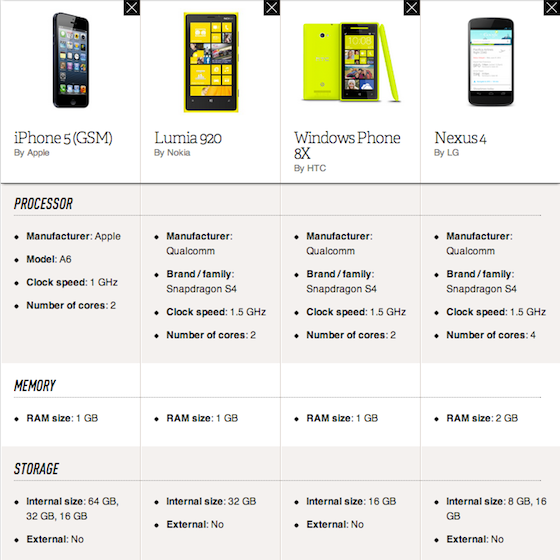 As flagship devices, each of these phones includes a top-end camera sensor in the 8-megapixel range. While the Lumia 920 has drawn some controversy for Nokia's marketing tactics, there's no doubt that the phone's 8.7-megapixel camera is a stunner (though we haven't fully put it through the paces yet). HTC's 8X camera is perhaps a step down, but still features excellent photo quality and intelligent software, as well. The iPhone 5 again contains a superlative camera, just like the iPhone 4S before it. While its megapixel count is unchanged, Apple's done some software and sensor work to make low-light images even better than before. Finally, the Nexus 4 should have a much-improved camera over the Galaxy Nexus' middling shooter — but again, we'll have to wait until putting it through its paces to be sure.

The bottom line is that Apple, Microsoft, and Google now all have extremely compelling hardware options — there's almost no downside to be found here. It all comes down to personal taste, both in terms of the software each device runs as well as the physical hardware design. But, there's one last spec that's worth mentioning: three of the four phones are LTE-capable... but the Nexus 4 will be stuck on HSPA+. If you really desire LTE, you'll have to look elsewhere.