3D printing for fun and profit: a serious hobby grows up

But is it the next industrial revolution?

Share All sharing options for: 3D printing for fun and profit: a serious hobby grows up

The ragged edges produced in 3D printing rather suit this Yoda sample from the Afinia H-Series 3D Printer, which costs $1,500 and comes with tech support.

There were 76 exhibits in the 3D printing category at this year’s Maker Faire, and the two tents devoted to it were jammed. Attendees handled interlocking cubes, spherical lattices, bracelets, and brightly-colored figurines at every table, repeatedly asking, "This was 3D-printed?" even though the answer was always yes. "It’ll be a parent holding a kid, and the kid’s mouth is just open, and then I’ll look at the parent and their mouth is open too," said Elisa Richardson, a rep for the 3D printing marketplace Shapeways.

The phrase "3D printing" refers to a group of technologies for printing solid objects from digital designs, technologies which are rapidly becoming cheaper and more accessible. Colloquially, "3D printing" has two definitions. Definition 1: a revolutionary movement in which workers will own the means of production. Definition 2: a novelty technology that, at its most impressive, yields trinkets that could pass for being made in China.

Chris Anderson, the editor-in-chief of Wired, released a book yesterday called Makers: The New Industrial Revolution, in which 3D printing plays a star role. "Machinery turns into a button press," the author said during his Maker Faire keynote, pointing to a sleek, microwave-shaped 3D printer across the stage. "What world does this create?"

"Machinery turns into a button press. What world does this create?"

According to Anderson and his co-speaker Bre Pettis, founder of MakerBot Industries and charismatic frontman for the 3D printing movement, the world for a bright future thanks to the nascent 3D printing industry. The two are members of a school of optimists who believe 3D printing is a disruptive technology that will have an impact of the same magnitude as the internet’s effect on publishing.

This sentiment is shared throughout the maker movement, that syndicate of entrepreneurs and tinkerers marrying homemade with high-tech. The wares on display at this year’s Maker Faire gave a glimpse at what 3D printing could become — but also how far it has to go.

Last month, the research firm Gartner declared that 3D printing is at the "Peak of Inflated Expectations" in its trademark annual report on the hype cycles of new technologies. If 3D printing follows the trajectory of other revolutionary technologies — for example, the internet — it will fail to be an immediate game changer, disappointing its early fans. According to Gartner, 3D printing will then fall back into relative obscurity, but continue to improve until it gradually catches on in the mainstream.

Back in the 3D Printer Pavillion at Maker Faire, some of the most cutting-edge 3D printing startups showed off their wares. "Every home will have a 3D printer within 10 years," said Craig Broady, an engineer at Formlabs, a Cambridge-based 3D printing startup that has raised more than $1.4 million on a $100,000 Kickstarter goal with 22 days to go.

Most 3D printers use "fused-deposition modeling" technology where plastic is heated and deposited in layers through a needle, meaning the object is basically melting until it’s finished. Formlabs developed a printer it calls FORM 1, which uses lasers and liquid resin to print objects with a precision that leads the industry. The startup demonstrated this with a magnifying glass and an intricate replica of the Eiffel Tower.

The 3D printing revolution was first declared at the turn of the century. The price of machines that could print plastic objects from computer designs started dropping from the hundreds of thousands to the tens of thousands. More than six years ago, when the cheapest 3D printer on the market was still $25,000, Gizmag imagined 3D printing "eventually finding its way into local bureau which produce while-you-wait samples as a service, and eventually to the home where designs could be downloaded from the internet and manifested at whim."

The 3D printing industry seems to be growing at an unsustainable rate. Home printers are now available for under $500. The quality of the products is rapidly improving, the size of the objects is growing, the number of companies working on 3D printing is increasing, and there have already been twice as many news articles to date in 2012 as there were last year. In a typical headline, the Telegraph wrote, "3D printing: the technology that could re-shape the world."

Despite technological advancement, 3D printers still cannot replicate objects with moving parts. But most 3D printing startups and artisans at Maker Faire were displaying pretty basic products, like logos, the familiar bumpy figurines, and feats of geometry. Afinia, a startup that targets professional designers, had printed a few Halloween ghosts. Weistek, which claims to be the first 3D printing company in China, was showing off a Buddha, dragon, and tiny noodle bowl.

While kids loved being able to print toy sharks on a MakerBot — it may take 36 minutes, but it’s still cool — most attendees seemed to be missing the import of what they were witnessing. "Well, we don’t have a 3D printer," one father groused at his kids. "We’ll just have to cut things out of paper."

More than a toy, not yet a revolution

In April of 2011, the Dutch company Shapeways hosted an intimate gathering in New York to celebrate an office so new it had yet to be filled with furniture. Instead, the company set up two white tables with products from its community of designers, whose creations get printed on the company’s mid-range machines and shipped to buyers. Because Shapeways handles the production, its 3D printed objects are some of the prettiest and most complex in the industry.

But after getting an earful about how 3D printing will change the world, the spread was underwhelming. At the time, Shapeways was mostly printing all-white geometric sculptures, mottled bracelets, ugly earrings, purposeless lattices, and solid-color figurines whose obvious lines made them look like tightly-coiled slinkies.

A year and a half later, the Shapeways spread looked very different. 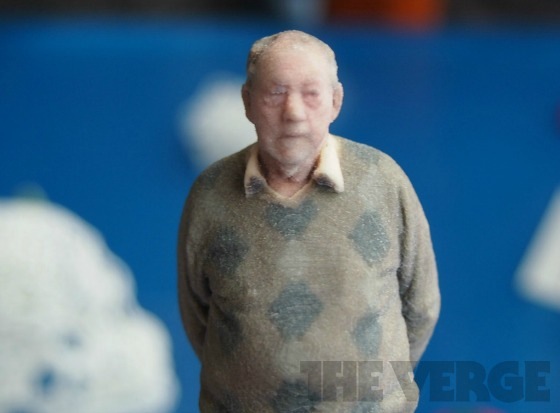 The company now prints in 30 different materials, including silver, full-color sandstone, stainless steel, and glazed ceramics. One of the most popular items on Shapeways is "A Little Sad Keanu Reeves," a tiny sandstone version of the actor in a blazer and jeans, his face and hands perfectly flesh-toned, with separate fingers and lines to texture his hair. At Maker Faire, the company showed off a lighter, a pair of sunglasses, and a detailed replica of the Nyan cat meme sailing on an 8-bit rainbow.

How did Shapeways's production get so good? Machines have improved, said marketing director Carine Carmy, as have the post-printing process and the company’s design guidelines. Design software is also getting better and more usable, she said.

How did Shapeways' production get so good?

Shapeways has a few machines in New York as well as a factory in the Netherlands, and it will open a factory in Long Island City later this month. For some of the tougher materials like ceramic and metal, Shapeways partners with companies like 3D Systems, which manufactures a range of printers from desktop to industrial-grade. 3D Systems bought the pioneering printer-maker Z Corp last year, and has also been improving its machines and processes.

With Shapeways now printing out shelf-ready products, the economic power of 3D printing is easier to see. For example, a jewelry designer could use a 3D printing marketplace like Shapeways, Sculpteo, or i.materialise to collect orders on demand and avoid keeping a drawer full of inventory. "I think 3D printing as a sci-fi technology might be reaching its peak," Carmy said. "But 3D printing as a revolutionary game changer, I think we’re just starting to see the beginning of that." 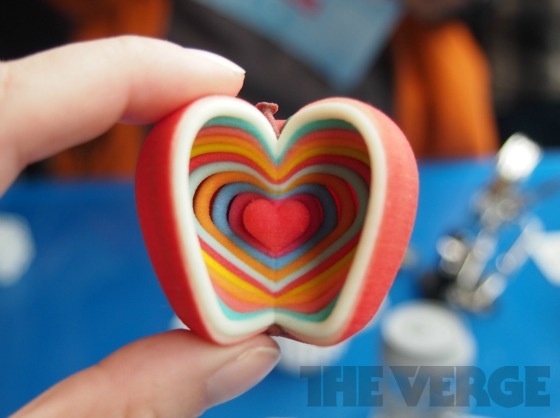 As for the desktop home printers, they’re getting more sophisticated too. "I don't think there's any plateauing going on," Andrew Pelkey, a spokesperson for MakerBot, said in an email. "Like, the slicing algorithm that we developed for our new software, MakerWare, generates a toolpath with only a fraction of the filament retractions [meaning] fewer stops and starts. This is tough to turn into a marketing point, but overall it makes for stronger and more consistent builds. There are little things like this going on in the background."

Home printers also don’t need to be perfectly refined in order to be useful. The results are already good enough for a designer to rapidly protoype an invention or a new part. According to Anderson, whose kids print dollhouse furniture and Transformers, a child will value a toy that’s a little lumpy, because she made it herself.

Perhaps the creative force of the 3D printmakers will be enough to propel the movement to world-changing scale. "There's some chemical in the brain that gets released when you fix something or make something," said MakerBot's Pettis. "And that's a powerful motivation."

October Surprise: a roundup of the biggest stories from a crazy month