NHK is showing off some 3D binoculars that leverage 8K resolution to let users zoom into the image without significantly degrading quality. We're just starting to see companies launch the first 4K televisions, but NHK is still working hard to demonstrate the benefits of 8K — the other Ultra High Definition format. Dubbed Super Hi-Vision by the Japanese national broadcaster, 8K offers 16 times the resolution of full 1080p HD and has so far been demonstrated on a huge 145-inch Panasonic plasma TV. Such a set is unlikely to make its way into normal homes for several decades, so NHK has been busy demonstrating other ways to make use of the huge resolution.

Zoom up to 4x and still get full HD

The goggles on display at CEATEC showed 3D diorama images of locales in Japan that had been filmed with Super Hi-Vision cameras in 4K or 8K. By panning the goggles around and manipulating a lever, the user is able to zoom in and out of the image at will; 8K resolution means that you can zoom up to 4x and still get a full 1080p HD picture. The concept is similar to an earlier demo we've seen for touchscreen tablet zoom control on 8K TVs.

While these binoculars are somewhat less practical for home use, the 3D effect was really impressive and we could imagine them being put to use in public locations such as museums. Companies like Sony, meanwhile, will hopefully be looking at the concept for next-generation implementations of their head-mounted 3D viewers. 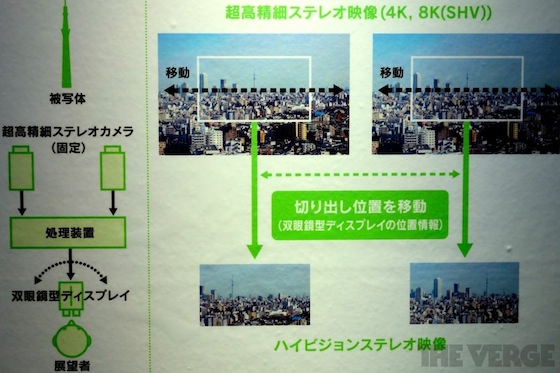