With large-screened cellphones taking a bigger and bigger share of the market, their usability repeatedly gets called into question. And nowhere is the issue more apparent than in Japan, where a huge proportion of the population relies on crowded public transit, using their phones to read news and email on the way to work. Today, NTT Docomo’s research arm is showing off a touch-based interface called Grip UI that’s taking on the problem in a new way, with pressure sensors on the device’s edges and back (pictured below) that allow the user to input commands just by squeezing. 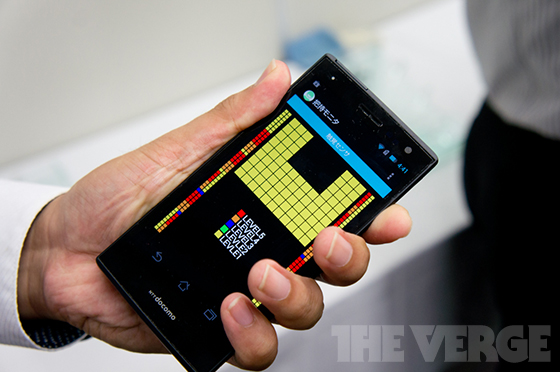 The biggest roadblock is remembering where to squeeze

Using a modified Panasonic P–06D, the company showed us how equal pressure along both of the phone’s edges could be used to unlock the device, and how strategic pinches could be used to launch the browser, access your bookmarks, launch a voice search, and perform other tasks. Users are also able to configure the device, mapping commands — say, launching the calculator — to more distinct inputs, like a three-finger eagle claw grip. The biggest problem we ran into was memorizing where to squeeze to make the phone do what we wanted, so some kind of quick reference command would be really handy. To Docomo’s credit, everything worked as expected, but it would be nice to have things tuned for a snappier response; a quick pinch feels more natural than the prolonged squeeze required by the current build.

There’s no denying that bigger smartphone screens are better for consumption activities like watching video or reading, but the trade off in one-handed usability has always been lurking in the background. Grip UI is still just a prototype (Japan’s biggest carrier says it has no plans to add the feature to phones anytime soon), but we’re glad to see someone approaching the problem from a new angle.