Tweetbot-maker launches Netbot, a first-class but familiar client for App.net

Share All sharing options for: Tweetbot-maker launches Netbot, a first-class but familiar client for App.net

Tweetbot-maker Tapbots today announced the release of Netbot, a $4.99 iPhone and iPad client for App.net, the crowd-funded Twitter alternative that doesn't serve ads. Netbot is essentially Tweetbot, one of our favorite Twitter apps, with a few tweaks here and there to take advantage of App.net's unique qualities. For this reason it didn't take too long to build, according to Tapbots developer Paul Haddad — especially since App.net was quite helpful along the way. "When you don't have to worry about affecting a 100 million users, you can be a lot more aggressive with changes," Haddad says. "App.net certainly isn't as mature as Twitter. While this means that it may not be as lively as Twitter it also opens up a lot of opportunities for doing things differently."

"It's a Social Networking client."

For starters, it's not just an App.net client. "It's a Social Networking client," Haddad says. "It allows us to add on support for other networks and protocols (such as tent.io) in the future if we find them to make sense." But for now, Netbot is to Tweetbot what App.net is to Twitter. And that's it. There's really not a whole lot to say about Netbot besides the fact that posts are now up to 256 characters in length versus Twitter's 140. It swaps out retweets for "reposts," a blue-ish hue for a black one, and there are no Direct Messages or push notifications, because App.net doesn't yet support them. 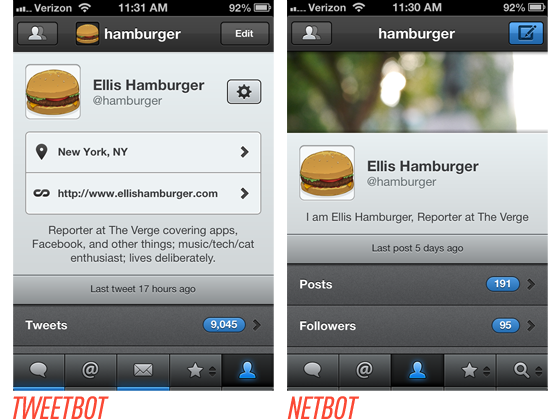 "The App.net guys have been very fast and have been consistently rolling out new APIs on a weekly basis, so we expect all these features to be available relatively soon," Haddad says. On the business side, App.net also recently dropped prices from $50 per year to $36, and added a monthly subscription option. One nice Netbot-exclusive touch is the inclusion of profile cover photos, which Twitter recently added to its own apps (presumably in response to both Facebook and App.net), but has notably left out of its API for developers. There's also an exclusive "Find Twitter Friends" function inside Netbot to make the switch to App.net a bit simpler.

So Netbot's similarities with Tweetbot re-highlight the question of the day: is there room for both Twitter and App.net, which is essentially a paid and ad-free version of Twitter? "Twitter is focusing on providing much richer user experiences with Cards and Apps within Tweets, while App.net seems to be more focused on providing the simple short bits of text experience," Haddad says. "I think there's more than enough room for both, and I do expect App.net to become more and more differentiated as it matures." With support from innovative developers like Tapbots and frequent API updates, App.net may just surpass Twitter's feature set during its first year of business. The only trouble then, is acquiring users.