Twitter's motives for maintaining a "consistent" user experience are becoming clearer today with the debut of surveys, a new tool that will permit advertisers to poll users directly within their timeline. Twitter is partnering with Nielsen — a company intimately familiar with data analysis — on the venture, and has confirmed that users are already being tapped to participate in the first brief questionnaire.

However, much like promoted tweets, surveys rely on functionality that is exclusive to Twitter's native mobile apps and website — you won't see them in Tweetbot, Twitterific, or any other popular third-party clients. We're guessing that's likely to be viewed as a good thing among anyone using those apps, but it's also a perfect example of why Twitter is seeking to curtail the creation of new apps that replicate its core functionality. 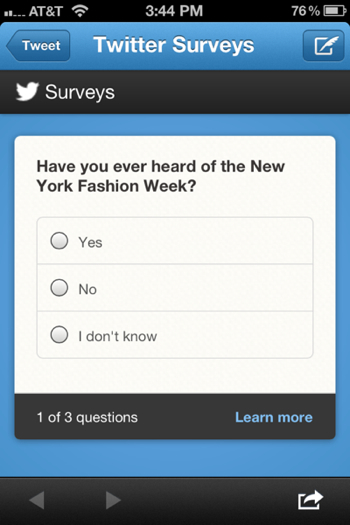 Surveys and other advertising options become all the more appealing when they reach a maximum audience, and third-party options have become an obstacle to that goal. Twitter has chosen Nielsen, a company intimately familiar with data analysis, to comb over survey results. It's difficult to know how prevalent surveys will become in your day-to-day Twitter usage, but we should have a sense of that early next year when the tool becomes available to more advertisers.