Joe Belfiore on Windows Phone: 'we're not done until we've checked all the boxes'

Joe Belfiore on Windows Phone: 'we're not done until we've checked all the boxes'

Microsoft's grand unveiling of Windows Phone 8 this week marks the completion of this particular phase of its mobile operating system, but the company is far from done. In an interview with The Verge, Microsoft's manager of Windows Phone, Joe Belfiore, sat down with us to talk about Microsoft's approach to apps, developers, and hardware.

One key part that Microsoft has focused on recently is bridging the app gap with rival platforms. Belfiore explained on stage at the company's Windows Phone 8 event that it now has 46 out of the top 50 apps from rival platforms. "The four I would say that are missing that count as the top 50 are Instagram, Viber, Pinterest, and Wells Fargo," says Belfiore. "If you look broadly at download numbers and usage and engagement those are the ones for us are top priority."

"We are going to keep coming back."

Some may argue — us included — that there are many more top apps missing, but Belfiore insists the company is being aggressive about landing the remainder. "We're actively working on everything. From our perspective we're going to keep working with everybody who has got a meaningful app." Microsoft isn't taking no for an answer when it comes to reaching out to these top developers. "We are going to keep coming back. You might get one answer today, you might get another answer later," he says. "We're not done until we've checked all the boxes."

Apps might be a focus for Microsoft, but an odd choice to keep the Windows Phone 8 Software Development Kit (SDK) secret led to frustration amongst Microsoft's developer community. "We really wanted to wait and talk about the end user features until close to the launch," explains Belfiore, noting that the awareness around Windows Phone 8 will reach consumers at the same time they can buy a phone. "Because of the fact the SDK has an emulator which is the entire phone experience, we decided it would be better to wait on broad public availability of the SDK to minimize the amount of publicity that happened around the features earlier." The response might not please developers, but Microsoft is clearly trying everything it can to increase Windows Phone market share — with a big bang approach this time around. "On balance we felt like it was the right decision."

On the topic of what feels like another Windows Phone re-launch, Belfiore defended Microsoft's choices. "We did it initially but it was completely brand new, we didn't have the hardware support that we do today, we didn't have the apps that we have today." Previous marketing efforts around Windows Phone 7.5 were led by hardware vendors, says Belfiore, but this year Microsoft is going to market Windows Phone heavily. "We have the apps and that was a big hill to climb over being a new platform, and then we've got the hardware so it's a meaningful year and Windows 8 is launching. It's a very meaningful year to get out and tell the story."

"The story" that Belfiore refers to is the interesting part of Windows Phone 8. By highlighting Rooms and Kid's Corner as standout Windows Phone 8 features, Microsoft appears to be targeting certain markets with its latest mobile OS. This is on purpose, he says. "I think that Android and iOS go after this incredible generality," he says. "They're trying to build a platform that somebody else might do something with that might be good for you." 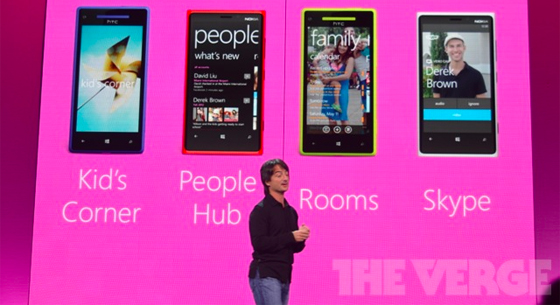 Microsoft's approach, at least according to the company, is to target a number of audiences and make its phones personal. "In this case we've picked a few audiences and we've tried to build stuff that's for them. It's tricky because you don't want to alienate people, but if you take parents or families as an audience then we've built Kid's Corner and Rooms so that we can tell a story that's very specific about the benefit you'll get from Windows Phone."

It might seem like a desperate — perhaps subtle — attempt by Microsoft to try and dig into audiences that will buy Windows Phone. The company is trying everything it can to really kickstart momentum. "We thought we could zero in on that and try to do something," admits Belfiore. Targeting families and moms has been tried and tested by other manufacturers with little success, but Belfiore is confident that "people love Kid's Corner," based on some early feedback from testing. Time will tell here, but a healthy app ecosystem is crucial for Windows Phone's success and the company showed small signs of improving that this week.

What's next for Windows Phone? With persistent rumors of a self-branded "Surface phone," I asked Belfiore about the possibility. "I am incredibly excited about the phones that these guys are launching this holiday," he said, noting this week's news from HTC, Samsung, and Nokia. "Right now we are focused on these phones and how terrific they are and watching these companies get out there with mobile operators and selling them." It wasn't an admission or a denial, but clearly, a Surface phone could be the next way that Microsoft checks off another box in its continued push to secure Windows Phone market share.

More from this stream Windows Phone 8 launches: all the news from Microsoft's big event