Microsoft rips a page from Spotify's playbook to take on iTunes

Microsoft rips a page from Spotify's playbook to take on iTunes

Apple has been the king of the digital music world for most of the last decade, and its iTunes Store continues to dominate the online music industry despite recent challenges from Amazon and Google. The combination of a tightly-integrated storefront and killer hardware gave Apple a combination that other competitors were unable to match — but just as consumers started shifting from physical to digital media a decade ago, we're at the beginning of another sea change in music. Companies like Spotify, MOG, and Rdio have emerged over the last few years, offering the promise of all the music you can handle anywhere you go, for the same price each month that you'd pay iTunes for a mere ten songs.

While Apple hasn't yet mustered a response to this growing trend, sticking with its hugely successful virtual record store model, Microsoft just announced it's ready to take on the streaming competition. The new Xbox Music is an all-in-one service that's equal parts iTunes and Spotify — while Microsoft is keeping the same a la carte store that it has offered for years, it's augmenting that with an updated version of its Zune Pass streaming service. For the first time, Microsoft will offer free, ad-supported streaming to anyone using a Windows 8 PC — just like Spotify — or a Windows 8 or RT tablet. There's also a Pandora-style Smart DJ feature for making artist-specific "stations," and for $9.99 a month, users can access also sync music to their Windows Phone 8 device and Xbox 360.

We're at the beginning of another sea change in music

With this new service, Microsoft isn't directly trying to beat Apple — it's going after Spotify, Rdio, and all the rest of the streaming players out there. If Microsoft can be successful, Apple will be in the unfamiliar position of having to play catch-up in the digital music space for the first time. Success for Microsoft is far from assured — the company hasn't made much of a dent in the music world thus far — but it's hoping to use the strength of the Xbox brand, the ubiquity of the Xbox 360 console, and the wave of interest in its massive Windows 8 redesign to carve out a place of strength in the streaming world.

"We really wanted to build something from the ground up that solved a consumer problem," says Jerry Johnson, GM of Xbox Music. "It was clear to us that rebranding Zune doesn't solve the problem." Chief among the issues Johnson's team identified was the fragmented music experience many consumers have to deal with. Many music listeners have legacy collections of MP3s and also now use streaming services, sometimes more than one — Microsoft hopes to offer them a single experience that encompasses all listening options. Easier discovery and sharing of new music is another area that the company hopes to improve upon. "We wanted to do this with an all-in-one solution — music shouldn't be work, it should just work," Johnson says.

"Music shouldn't be work, it should just work."

Even though Microsoft hasn't met with much success selling songs and albums a la carte, the company still sees it as an important part of its offering. As Johnson told The Verge, the whole concept of Xbox Music is "consumer choice." With both streaming and purchase options, Johnson gave the example of users either shelling out cash to hear a new album immediately, or waiting a few days for it to show up as a streaming option. He rhetorically asked me whether the average consumer "should have to understand what a specific band or label decided to with how they released the music?" Answering his own question, Johnson says, "no — they should just be able to go and find it." 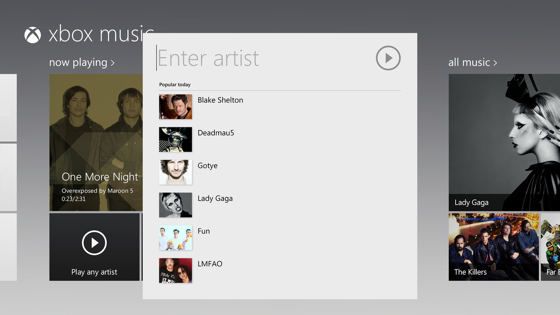 With Xbox Music's free streaming option, the company is adopting nearly all of the main features Spotify offers. All of the major streaming services offer a free option where listeners are tethered to their desktop and must deal with ads or a limited quantity of music each month. Paid users can access that music pretty much anywhere they are, through desktop apps, the browser (in the case of Rdio, MOG, and eventually Xbox Music), and — most crucially — on a mobile phone. It doesn't hurt that many of these services plug right into Facebook, the dominant social platform of our age — it's now exceedingly easy to actively share music with your friends as well as see an ongoing stream of what those friends are listening to.

Social has long been an Achilles' heel for Apple

Social has long been an Achilles' heel for Apple, and iTunes continues to be no exception. As the software and store are based off an ownership model, users are not permitted to share songs with each other — the only built-in option is sharing links to songs in the iTunes Store via Facebook, Twitter, or email. Ping, Apple's recently-shuttered, first-party attempt at a social music service, was one of the company's most uninspired products and a perfect example of how out-of-touch Apple can be when it comes to the web. Sooner or later, that's going to have to change — if Apple ever launches a music service that isn't based on a la carte purchasing, social integration and easy sharing of music will need to be at the forefront, and the company hasn't yet really proved it's up to the task.

For its part, Microsoft is certainly not downplaying social, but nor is it going overboard at launch. "Sharing of music is very important," Johnson says, "and it's something we believe needs to be done in a measured and careful way." Specifically, Johnson's referring to "passive" sharing via the social graph and Facebook — "the hardcore group will like it if their friends are very much music enthusiasts, but you'll also hear a big group say they get very annoyed at the volume of things that flow through there." Xbox Music allows for active sharing via the Windows 8 charm bar, but passive sharing won't be implemented until next year. In addition to the "overshare," Johnson also wants to protect users who might not want to share their "guilty pleasure" listening habits to all of their friends on Facebook — though Johnson wasn't able to share how it'll overcome these pitfalls.

As important as those social hooks are, it's the integration with smartphones and tablets that really makes this generation of streaming, subscription services a viable option compared to their predecessors from the mid-2000s. For years, the vertically integrated iTunes and iPod combo was untouched by competition, but the launch of Apple's App Store in 2008 helped to break up this stranglehold. Finally, competing services had a way into Apple's hardware, which was previously locked down as tight as a bank. As iOS users now have a wide variety of music services to choose from, it seemed that Apple would have to offer streaming services of its own — but Apple's only move into the cloud has been iTunes Match.

Microsoft is gunning for all users, regardless of platform preference

Meanwhile, Microsoft already has plans to go after iOS and Android users as well as its Windows base with the planned launch of dedicated apps next year. "The feature sets aren't locked in those clients right now," Johnson says, but offering a quality, full-featured experience across all platforms is going to be important for Xbox Music's long-term success." While he couldn't commit to feature parity, Johnson says, "how we extend that experience out to iOS and Android is critical for our business." After using its free service to get a user "engaged in music," Johnson told us the next step is to let users take their music with them anywhere — and the focus on Android and iOS clients seems like a tacit admission that Microsoft isn't assuming everyone will be doing that with a Windows Phone device.

As important as the all-in-one service and Microsoft's cross-platform plans are, Johnson also repeatedly stressed the importance of international to Xbox Music — it's launching in 22 countries, with free streaming available in 15 of them. Streaming will be particularly important internationally — while streaming may not yet rule the US, there are a lot of countries where consumers have zero interest in buying music a la carte but have no issue with signing up for Spotify. Apple doesn't have an answer for those countries yet — but Microsoft does.

At the end of the day, Apple isn't ignoring this shift — reports are surfacing that Apple will have a new, streaming radio-style service ready in early 2013. And while people have expected Apple to tackle streaming for nearly three years, since its purchase of Lala in late 2009, it's obviously not a simple undertaking. "Building this type of all-in-one service with hundreds of deals in place was not a small task," says Johnson. He says it took Microsoft about 12 to 18 months of intense focus on building a brand new, integrated service, but he was also quick to mention that the company heavily leveraged its experience with Xbox Live and Zune. "The [Xbox Live] service components started in 2002, and Zune launched in 2008," Johnson says. "There's aspects of this related to building relationships with labels, creating content ingestion processes and things like that which started back with that.

Apple certainly has similar experiences to draw from in creating its own streaming, all-in-one service of the future — the iTunes Store has been open for business since 2003. It also has much of the infrastructure that it needs, with last year's launch of iTunes purchases in the cloud and iTunes Match. And yet, Apple's faithful customers are still stuck with files and album purchases. In fact, it's entirely possible that the music industry is actively working against an Apple streaming service at this point. The company wielded unprecedented power for the better part of the 2000s as Apple drove the move towards paid, digital music — something the music labels desperately needed. Because of that desperation, the labels became a bit beholden to Apple, a situation that the labels are likely eager to avoid as the industry moves towards streaming. However, Apple's now at the mercy of those labels as it works to negotiate streaming rights, and it's likely that the labels are holding out for more control (or more money) this time around.

Regardless of the reasoning, there was no "one more thing"-style surprise relating to iTunes at Apple's iPad mini event last week; iTunes 11 still isn't available a month and a half after being announced. Apple had enough of a challenge on its hands fend off the Spotifys and Rdios of the world — but now, Apple's most ancient rival has a bold new plan to outdo it in the one space where the company was essentially unchallenged for so many years. The question now is whether or not Apple can muster up a response in the time it has before Windows 8 users are able to install Microsoft's Xbox Music app on their iPhones and iPads. The clock is officially ticking.