The curious case of Microsoft's Metro, a design language that cannot be spoken

Share All sharing options for: The curious case of Microsoft's Metro, a design language that cannot be spoken

Microsoft's Metro design language has gone through a name change of late. Used to describe the company's design principles around typography and minimal graphics, Metro is now referred to as the "Microsoft design language." At Build today, Microsoft's Will Tschumy took developers through the heart of the company's approach to design. From its inception in 2003 as a "enormous strategic approach to design," MIcrosoft has used the Metro concepts throughout a number of its products over the years. Zune, Media Center, Windows Phone, and Windows 8 all contain the principles, with Live Tiles marking an instant visual connection to a simplified interface. For Microsoft, the bet on design is "$20 billion per year," according to Tschumy — a bet across its core products that generate the majority of revenue for the company.

During Tschumy's session today, the five-principle approach to Microsoft's huge design overhaul was laid out clearly for developers to understand and interpret for their own applications. "We did an enormous amount of research that went into the thinking behind the user experience," says Tschumy. "Microsoft is the only organization with a single consistent design language across all the screens we touch." Although developers were schooled on the approach, a number are still confused over the choice to drop the simple Metro naming — due to a potential trademark dispute. 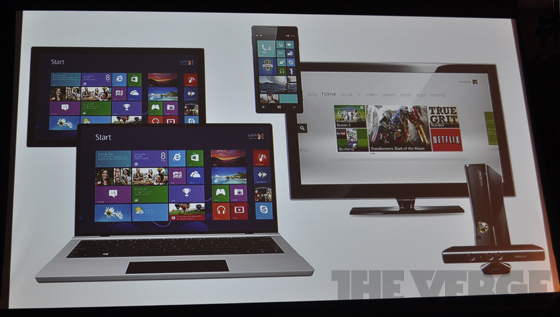 The elephant in the room

I asked Tschumy about the Metro naming, a simple and unique way to refer to the entire design approach from Microsoft. How would developers refer to "Metro-style" now that Microsoft has moved away from this language? "I'm not going to get into the details of why we're not doing that anymore, but what we are calling the applications is Windows 8 Store applications," he said, highlighting the confusion. Tschumy argued you could refer to the style as "Windows 8 Store-style." The developer crowd appeared to agree that the Metro naming needed to be addressed, with the vast majority clapping for the question. It was the elephant in the room, and despite Tschumy mentioning Metro by mistake on a number of occasions during his presentation, it wasn't officially addressed until the Q&A.

"Windows 8 Store-style" is so awkward and convoluted, perhaps Microsoft doesn't want people to refer to this design language or the elements involved at all. The confusion certainly suggests that. Microsoft is firing on all cylinders right now across its product and marketing teams to aggressively promote and market Windows Phone 8 and Windows 8. Given Microsoft's obstinate refusal to provide one, a simple replacement for the "Metro" term seems as unlikely as it is needed. Microsoft's own employees are still confused over the naming. For a company that wants to tell a unique story of people phones and devices, this unspoken design language needs some serious translation.

Update: Microsoft has reached out to us to clarify that Tschumy misspoke when describing new apps as Windows 8 Store applications. "The correct nomenclature is 'Windows Store Apps' says a Microsoft spokesperson. The confusion continues.