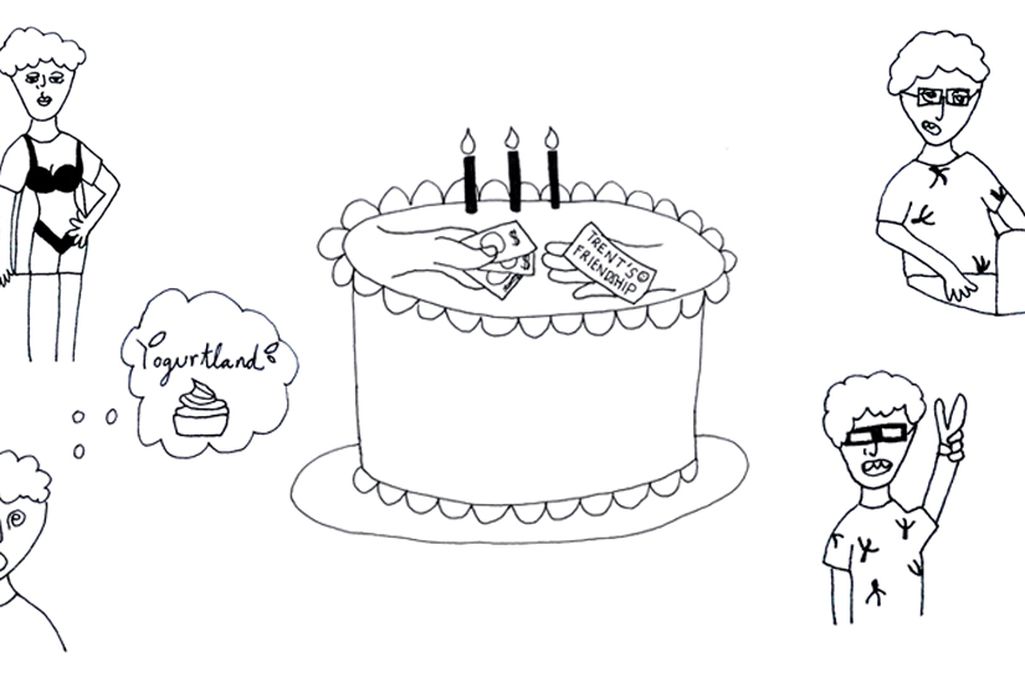 I love Facebook, don’t you? Tagging friendsters in silly photos, checking out which assholes from high school had another baby lately, and giving sympathy “like”s to middling links posted by distant relatives aren’t just half-hearted time-wasters: they’re new ways of learning about and interacting with people whose lives you want to know more about anyway.

One person I’ll never be Facebook friends with is my mother. It’s not like we aren’t friends IRL. But every time a question of over- or under-sharing with my entire social network comes up, I think back to this one time in the parking lot after school. A carpool buddy recounted, in artisanal detail, the epic tale of a dreamed-up sexual encounter with Baywatch-era Pamela Anderson, concluding with the graphic birth of their fictional child on the beach. Mommy, who had caught the Red Shoe Diaries-caliber tale through an open window overlooked by the fourth-grade Lothario, didn’t say anything at the time. But she told me later that there are different little boys in every little boy: the one he is with other little boys, and the one he is with his parents. Twelve years later she taught me, on accident, another lesson when she ran across my (too) personal blog (RIP too-personal blog, some babies are too beautiful for this world) and learned far more than she needed to know about me. Like most LiveJournals, mine was a murky cocktail of fact, fiction, and lewd animated GIFs. While it was shocking for both of us, in hindsight it wasn’t a huge deal: we both realized that the person presented online was separate from the one that comes home for Christmas every year. 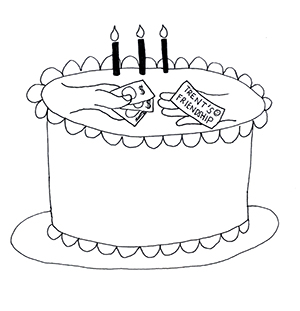 On September 18th I celebrated my 30th birthday. It’s the day my mother calls annually to recount horror stories of labor pains on the way to hospital, remind me what she was doing at my age, and maybe cry a little bit: you know, mom shit. On that day, I got five birthday txts, five phone calls, and 16 well-wishes on my Facebook wall.

When I signed up for Facebook in 2004, I fabricated a birthdate for myself, choosing a month and day at random from drop-down menus, just as I did for every other flash-in-the-pan internet website that puffs its chest out into meatspace. My Facebook birthday ended up being, for no particular reason, May 15th — in 2012, my friends wished my happy birthday on the fabricated date for the seventh year in a row. I received 94 well-wishings on my timeline this year, up 49.2 percent from 5/15/2011.

Every year I fess up to the silly fact that it’s not my real birthday in some form or another on my wall, but no one reads it. The easy-write box that now pops out from the “birthdays” dialogue on the top-right corner of the Facewindow has removed the need to actually go to the birthday-haver’s page — a huge boon for facebirths all across the network. And, to be honest, the Facebirth is kind of starting to be way more fun than my real birthday. This year, something new evolved into existence: my clever roommates decorated a Facebirth cupcake for me. It had taken six years, but my Facebook birthday, born out of pure DGAF, had actually manifested itself in the real world, and it was delicious.

Last month, Adrianne Jeffries told you about Facebook’s evolving policies: it has “made enforcing its real-names policy a top priority.” When I signed up, the network was only open to college students, and their database was automagically linked to my NYU email account, and, therefore, my real name. Fuck you very much, NYU.

I don’t want you to think that I’m some sort of information anarchist railing against the privacy policies everyone seems to get their panties in a wad about. Fuck internet privacy. If you don’t want something to be seen by your fiance’s parents, a future employer, or your grandkids, don’t put it on the internet. Better yet, get better in-laws, a better boss, and cooler kids, or change your online behavior to something a little more PG. I’m all about the forced online Glasnost all of the over-lawyering and hyperextension of research that Facebook and other websites engender, but the online portrait of yourself has never, historically, had to be accurate. Chaos reigned supreme on the old Myspace; early adopters set out to confuse the systems set up to gather information about users. Every machine interface I encounter sees a slightly different version of me. It doesn’t have to be a total fabrication, and it doesn’t have to be a big lie (unless you’re in Second Life or the NAMBLA boards). This tactic also circumvents most questions of employability or spousal capacity: that person you see doing shots off Steve-o’s gooch in 1999? Not only was it thirteen years ago, that was another version of me. 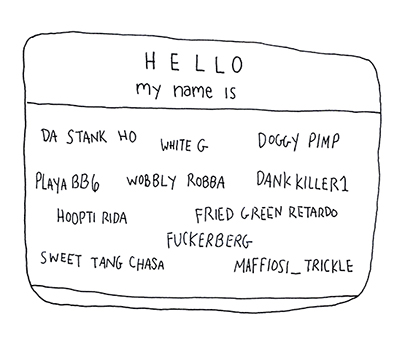 I am also not against data mining in the interest of a computer obtaining a more accurate portrayal of a person. When Google asks me to jump, I usually ask, “How high?” Their products and services make my life significantly easier, and I don’t feel like someone is cramming friend-fueled content down my throat to make it that way. If they serve me a few targeted ads to make Google Now happen, so be it. I’m all about Walgreens knowing what kind of hemorrhoid cream I want before I even come in; in fact, the wild anti-corporate hair up my ass will probably only flare up when I’m already in the cream aisle, remembering which tube a computer told me to buy, and then I’ll choose the other one just out of spite: my punk rock way of saying Suck it, Google. You’re not my mom.

Mark Zuckerberg’s continued crusade to make one’s Facebook profile a more accurate portrait of a person’s soul is not only highly presumptive about the capacity for computers to analyze people; it also discounts the very essence of humanity and the value of the non-digital world. If someone can be completely encapsulated by a bunch of photos, links, and pokes, do you really want to be friends with them anyway? You probably don’t, but Colgate, Microsoft, and Ikea certainly wouldn’t mind selling them a couple of shitty things they don’t need.

But the fundamental problem with this crusade for accuracy is that people are complicated. You’re a very different person when you’re singing “Call Me Maybe” to yourself in the shower than you are when you’re at the bank applying for a mortgage, probably just as different as your laptop-ensconced self is now from were when you were doing Jackass stuff in your teens (teens: reverse that sentence to decode it). A super-famous observer of humans summed this sentiment up 157 years ago when he said “I contain multitudes;” a few thousand years before that an obscure philosopher noted, more universally, that the only constant is change. 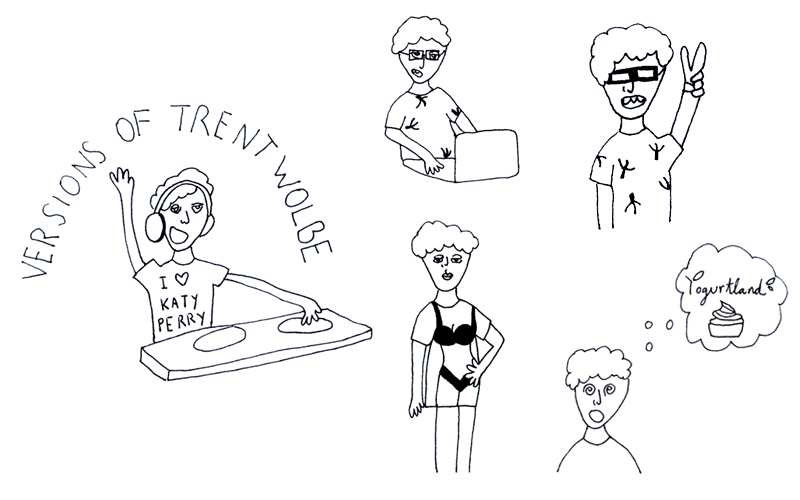 History is full of figures that have tried to cast humans as predictable creatures, nearly always in the pursuit of stacking cash, and many of them have been successful — banks and car rental agencies thrive on late fees derived from their primary products, a corporate testament to the procrastination of our nation. To be sure, a person who has been going to the same office for ten years a little after 9AM will be at that office around the same time tomorrow. Like weathermen, financial forecasters and advertising executives look at the past as an indication of the future. If you want to sell Pokémon paraphernalia (who doesn’t these days?), marketing data would tell you it’s probably best to stick your ad somewhere in the vicinity of Spongebob and iCarly, not The Price Is Right and The Young and The Restless. That’s research and tradition at work.

The recent backlash against users creating alternate identities for themselves takes this to another place. If you’re a FB investor (sorry!) unimpressed by mundane shit like emotion, creativity, and identity, I’ve got this for you: in an attempt to grow more serious by constraining its users’ self-presentation, Facebook is actively distancing itself from its most innovative and influential users. They are the ones who bring advertisers their biggest potential ROI; they’re also the ones who will drop any social media network at the slightest hint there’s something better lurking a few clusters away at a different URL. You might want to check in with Tom and Rupert Murdoch about this.

But more important than the cash flow implied by providing database-friendly, cross-linkable names to advertisers, Facebook is casting itself as something of a public utility or a banking entity not to be fucked with. Unfortunately, very few people will not fuck with a social network. It’s a web site, not the fucking Social Services Administration. It should have LOLcats, not PIN numbers. 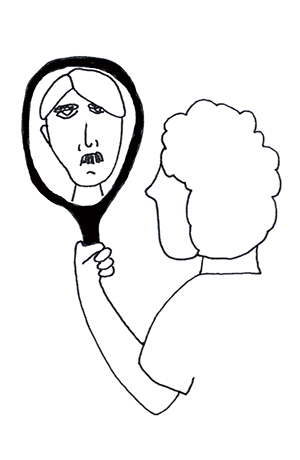 Any internet entity that defines itself as an essential element of human life is one that has overstretched its boundaries; it's also one that has, historically, indicated its own inevitable collapse. Like Hitler's vaterland, a concept dreamed up to rationalize infinite German expansion, Facebook's requirement for friends to use their "real identities" is the sign not only of an entity stealing "like"s from the bottom of the wishing well; it's also a DSM-IV-grade sign of megalomania in its leader. Our fresh-faced, hoodie-rocking Big Bro will doublespeak his way through policies all the way to corporate profitability, rationalizing each step with a shit-eating grin on his face, knowing that it won’t take a nation of downtrodden volks to vote him into power; it’ll just take a nation of EULA-ignoring grandmothers and stockholders. Total control — which Mark Zuckerberg has in his social monopoly — leads to dire consequences; thankfully we’re dealing with a global alternate reality coded in a dorm room, not an entire continent. Will Sean Combs be forced to tattoo his birth name on his wall and exiled to Friendster, exchanging depressing testimonials with Kim Dotcom and

Now that I’ve gotten your attention (LOL) I’ll admit that I don’t think Mark Zuckerberg and Hitler have much more in common than a critically hyperinflated vision and ego. Sadly, there will be no liberators from Sealand touching down upon the shores of Palo Alto to free social networkers from the chains that bind them. What’s more likely to happen is a slow, boring bleed of users tired of the restrictive blue-and-white interface while they find their way to other more expressive underdog sites: I’m currently putting my money behind the new Myspace, just for the LOLs and the hot Timberlake injection at play there. More than anything else I’m just excited about livetweeting the Fincher-directed, Reznor-scored fanfic telenovela revolving around the misfortunes of a few wannabe social media kingpins.

The series finale, eclipsing Bieber and Ludacris by billions of views, finds Zuck and Rupert Murdoch in an unglamorous white-collar holding cell in lower Manhattan, discussing their missteps in the social media game. Having failed to review the timelines of the record and film industry executives that preceded them, they can’t believe they didn’t see it sooner. After decades of waning interest in social media, users realized that, like information, friendship is free, and it doesn’t need push ads or using your real name to acquire. As they look into each others’ eyes across the folding table in the midst of a heart-wrenching but deeply-satisfying conversation, they realize that friendship is most valuable when it’s conducted IRL. The camera cranes away pensively as Zuck and Rupe shed single fat tears that hit the table simultaneously with a watery thud, running towards each other in the table’s fold like Lady and The Tramp along that fabled spaghetti strand. The tears meet, their salty bodies reacting with each other and crystallizing into Instagram-stylized heart. “Like,” Zuck says, with a half-smile that says much more; “thanks for the add,” says Rupe. Cut to Buick commercial. Fin.