Now that Razer has honed the Blade's edge, will it leave a mark?

Thin. Beautiful. Powerful. Who says you can't have it all? That seemed to be the philosophy behind the 17-inch Razer Blade when the company introduced the laptop last fall. A sleek, jet-black aluminum notebook with a high-end Core i7 mobile processor, a four-inch multitouch screen that doubles as a trackpad, dynamic LCD keys for macros and applications, and the stylings of a possessed MacBook Pro, the 0.88-inch thin machine was billed as "The World's First True Gaming Laptop" by its makers. Unfortunately, even at the company's $2,800 asking price, Razer couldn't achieve that goal. When we reviewed the Razer Blade, we found the gorgeous machine simply wasn't powerful enough to run the latest games at high settings. Bugs and incomplete software kept the LCD keys and touchscreen from reaching their full potential. Creature comforts were few, with an uncomfortable keyboard and terrible speakers to boot.

However, less than a year after release, Razer is back for round two. The new Razer Blade looks almost identical from the outside, but there's all-new silicon within: a brand-spanking new quad-core 2.2GHz Intel Core i7-3632QM processor, Nvidia GeForce GTX 660M graphics with 2GB of dedicated video memory, a larger 500GB hard drive and 64GB of solid state cache, all in the same 0.88-inch thin chassis. There's also a brand new cooling system inside, and some very large rubber feet to prop up the rear of the machine to aid airflow. Best of all, Razer figured out a way to shave $300 off the sticker price. The new Blade costs $2,500.

Do those changes and that price add up to a laptop you'd actually want to buy, though? We put the revamped Blade to the test, and here's what we found out.

First off, you might want to keep our original Razer Blade review handy, because the vast majority of what we said there still applies today. Aside from a handful of tweaks, the Razer Blade has the exact same hardware outside. You're still looking at a gorgeous, solid unibody aluminum chassis with each and every component in the same place. Like the hugely influential MacBook Pro, that means you'll still find all the ports on the left, and your wrists may chafe after resting a while on the sharp metal edges. Now, all three USB ports are of the speedy USB 3.0 variety, a solid improvement. 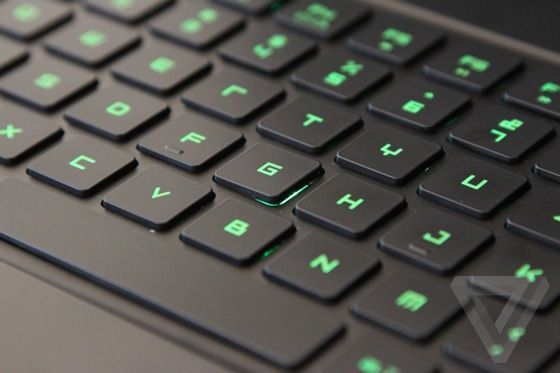 The keyboard still lights up a lovely venomous green, and is still a pain to use. Each and every anti-ghosting key can be set to a macro (or even turned off), which is wonderful, but physically they have to be pressed to the floor to accurately register your input. The Up and Down arrow keys are particularly unresponsive. Razer has, however, replaced the function keys with ones that fully light up, so you can easily see how to adjust screen brightness and volume in the dark.

The Blade's speakers have definitely been improved. They still don't sound great, but between revamped internals and Dolby Home Theatre v4 tricks, the sound field gets reasonably wide and loud, no longer feeling distant or monoaural like the original unit. 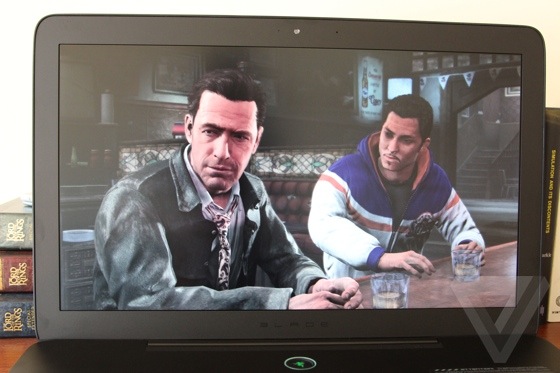 Speaking of the screen, the Razer Blade's 17.3-inch matte LCD display is exactly the same... but in the seven months since we reviewed the machine, the landscape has somewhat changed. Compared to a lot of the terrible screens we've seen on inexpensive thin-and-light laptops recently, the Blade's panel seems constrasty, colorful, crisp and clear, even if its viewing angles aren't quite as stellar as some IPS displays. It's an above-average panel, to be sure. On the flipside, though, it can't compete with the gorgeous, pixel-dense screens in the Asus Zenbook Prime or the MacBook Pro with Retina Display. Neither of those are really gaming machines, of course, but they both cost less than Razer's offering.

Razer has also spruced up the touchpad for round two, with deeper, clickier mouse buttons, improved Synaptics drivers, and a removable matte screen protector that improves the texture of the surface, too. The result? The Blade now has a perfectly serviceable pointing mechanism built right into the hardware. Two-finger scrolling doesn't always work flawlessly, but it's not bad, and I was actually able to play a couple levels of Max Payne 3 with only the touchpad and survived to tell the tale. 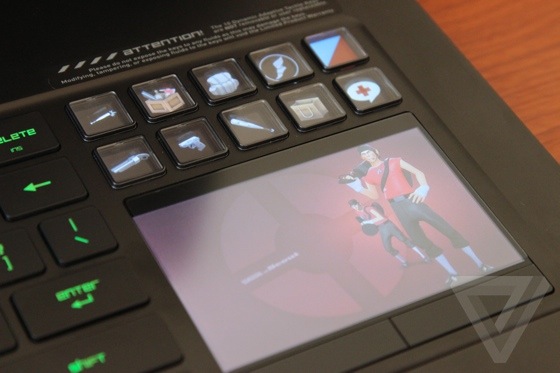 Unfortunately, the LCD screen underneath that touchpad, and its set of 10 dynamic tactile LCD keys, is still as much of a gimmick as it was six months ago. Razer tells us it has grand plans for the so-called Switchblade UI over the long haul: there's a software team at Razer building new apps, fleshing out a developer SDK, and even building a free content marketplace of sorts for the Blade and Razer's LCD-equipped keyboards. The Switchblade UI is still as much of a gimmick as it was six months agoAs of today, though, there's not a lot to show. You still get a fairly useful digital numpad, an on-the-fly macro recorder and a new screenshot capture tool, but most of the functionality relies on a tiny hamstrung version of Internet Explorer that's supposed to give you access to websites, Facebook, Twitter, and Gmail. Problem is, it's still really difficult to tap on your selections with any degree of accuracy, as the screen always seems to want to scroll up and down rather than execute a command. You'll also need to painstakingly navigate to your desired website every single time you use the LCD interface, because there are no bookmarks, and you'll need to log into your Facebook, Gmail and Twitter accounts every time you restart the laptop, because the Blade won't remember them. It's far easier to just pull out a smartphone. On the plus side, the Switchblade UI no longer fails if you put it into sleep mode or leave the laptop idle.

The Switchblade UI concept was originally supposed to deliver a set of LCD keys that would automatically, dynamically change their function to match your game. Razer insists such functionality will still arrive, but what we're seeing here is a far cry from that. Star Wars: The Old Republic has a combat logger, but generally compatibility with games like Battlefield 3 and Team Fortress 2 is limited to mapping those LCD keys to weapon and character select buttons, each with their own game-specific icon. If you want to play a Scout in Team Fortress 2, for instance, you can start up the Team Fortress 2 app, choose Scout, and then instead of tapping a number key to pull out your dented aluminum baseball bat, you can tap the little bat icon above the trackpad. You can easily make the same kind of "app" yourself, but having to manually create profiles for each game and execute them on your own makes the system feel less futuristic and more like an expensive set of macro buttons. 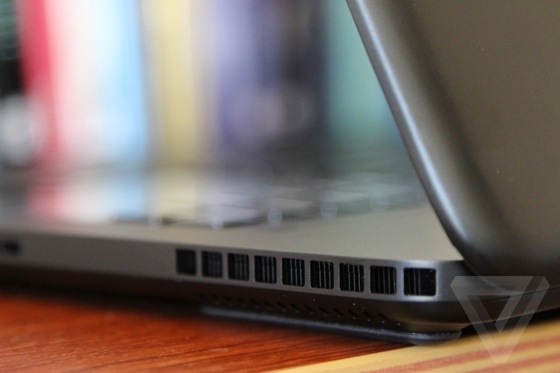 So does the new Razer Blade have the raw performance to deliver the portable PC gaming dream? It's pretty good, and definitely a couple of solid notches up the totem pole compared to its predecessor. Where the original Razer Blade's combination of a dual-core Intel Core i7-2640M CPU and Nvidia GeForce GT 555M graphics was only able to give us a playable Battlefield 3 experience at low settings and 1600 x 900 resolution, we could bump up the resolution to 1920 x 1080 here, and even play at 1080p and medium settings in a pinch. The original Blade gave us Just Cause 2 at 1080p and medium settings across the board, and here we could play comfortably on high settings, or completely max them out so as long as we didn't grapple and parachute through densely populated areas.The Witcher 2, which brought the Blade to its knees at 1366 x 768 and low settings, ran reasonably well at 1600 x 900 and medium with the new silicon on board. Finally, Max Payne 3 looks brilliant at 1080p and high detail, with only certain cutscenes dipping below the 30fps threshold. You still can't really max out the latest games with the second-gen Razer Blade, but compared to the size of the chassis it's a substantial amount of power. You can also yank the power cord and keep playing any game with no corresponding drop in framerate, which isn't always an option on many gaming monsters.

You do pay an additional price for that power, though: despite the improvements to the cooling system, the Blade runs pretty hot under that load. The all-important WASD keys are fairly far away from the blazing hot GPU, but the all-metal chassis still conducts a good bit of that heat to your wrists. On a warm day, I measured 100 degrees Farenheit at the keyboard, and 120 degrees at the GPU. The word "laptop" is a bit of a misnomer here. When you're just surfing the web, though, the Blade stays fairly cool, and I managed 3 hours, 27 minutes in our Verge Battery Test when doing so. I also didn't notice any major detriment to using a 64GB solid state cache and a 500GB hard drive rather than a pure SSD. Boot times were still fairly speedy at about 22 seconds from the time we hit the power button, and the notebook always felt nice and responsive. 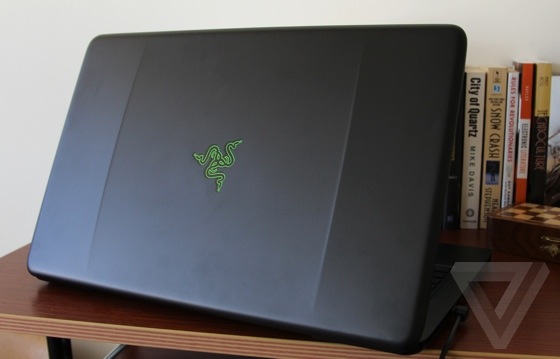 At the end of the day, the Blade is still a niche product that doesn't nearly manage to deliver its full promise, but it manages far more than it did earlier this year. Now, it can competently play games of all stripes, if not at the highest settings, and do so in a chassis that no other manufacturer has yet delivered. Unlike chunky, garish machines from the likes of Alienware and MSI, which weigh more and come with clunky power bricks, the Razer Blade can be comfortably toted around. The problem is that the rest of the world hasn't stood still: those chunky machines can now be configured with even more powerful graphics chips (GeForce GTX 680M, Radeon HD 7970M) that can max those settings out. Meanwhile, machines like the MacBook Pro with Retina Display are packing only slightly less capable graphics chips (the GeForce GT 650M) in even thinner machines.

Are gamers willing to pay a premium for a thin, stylish laptop rather than the extra horsepower for their games? If they do, what's to keep them from picking a even more svelte machine? The answer should be that Razer uniquely addresses gamers' needs using its technology (the Switchblade UI) and design expertise, but that doesn't quite describe the notebook that Razer is presently selling. The Blade is a handsome, capable machine with the potential to be so much more. It's not that the price is wrong. We just expect more from Razer.

Editor markup for the review scorecard of Razer Blade (late 2012). This is only visible in the story editor.
Most Popular
From our sponsor
Advertiser Content From