The bubble that wasn’t: what happened to ‘people discovery’ apps?

The bubble that wasn’t: what happened to ‘people discovery’ apps?

The SXSW festival is known as a launchpad for new trends in mobile apps, and last year the prophets declared that GPS-enabled "people discovery" apps were the next big thing. Open your phone and up pops a list of potential new best friends. "You're into 80s anime, soft corn tortillas and speed metal. Well hello stranger, let's grab a beer!" That's how it was supposed to work. Highlight was one of the first to make a big splash, combining easy onboarding with a simple UI and powerful technology to help you find people with mutual friends and interests near you. The company raised money from Benchmark Capital, SV Angel, Quora founder Charlie Cheever, and Mike Arrington's CrunchFund. Robert Scoble called it "the coolest app [he has] seen this year."

"You'll walk into a room and you'll know everyone's name."

"There are all these reasons why learning about the people around us is high-friction, so we don't do it and keep our headphones in and stare awkwardly at our phones," Highlight founder Paul Davison told The Verge. "I'm completely convinced that in 10 years, this will just exist. You'll walk into a room and you'll know everyone's name and where they work, and you'll have something surface the most interesting things you have in common with people around you." There's no doubt that there's some cool technology behind Highlight, but it turns out that people just don't have time to see which neighbors are also into Homeland. Today, Highlight is still considered one of the front runners in terms of mindshare, but boasts just over 5,000 daily users according to app metrics site AppData. This number is down from about 9,000 back in May. Serendipity, it seems, is not a killer feature.

And that's the problem with acquiring users as a people discovery app: providing a real utility that brings people back for more. "A lot of these apps come from a problem that 99 percent of people don't have," Kirill Sheynkman, Senior Managing Director at RTP Ventures says. Instead of focusing on discovering great places you can go to with friends and family, the apps focus on discovering people outside your social circle during your free time. "Most people go home after work and watch TV. It's a young college kid's problem," Sheynkman says. Highlight's founder disagrees: "The ability to publish profiles into the air above our heads... is a profound shift in the way the physical world works," and will take some time to sink in. 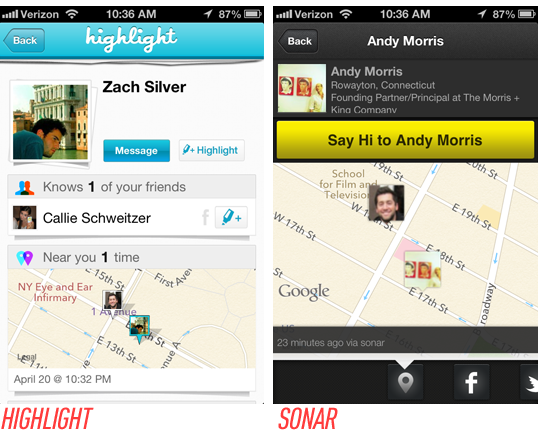 Highlight so far seems to have stuck with its original mission, and as the user numbers show, paid the price (for now, at least). A number of other players in the space have pivoted, with varying degrees of success, while expanding to other platforms. It seems "people discovery" might not be the golden egg these tech companies are sitting on. In fact the killer feature is location as a piece of metadata which can help you find information about current events, restaurants, and people you just walked past. Some apps like Glancee got lucky and didn't have to pivot. The company was acquired by Facebook back in May, perhaps in part because it focused on discovering places and not just other people.

Foursquare some time ago realized that seeing where your friends are isn't compelling enough, so it shifted its focus to providing the best possible recommendations for places to go with your friends. Its "Explore" functionality has grown in scale, as has its New York City office, which now numbers over 100 employees. The service has grown to 25 million users, and more than 500,000 of whom log on every day (which is only counting those who've signed up using Facebook). People come back because Foursquare uses what it knows about your tastes as well as your location to make relevant recommendations. And of course, helping people find places to spend money yields a real business model. 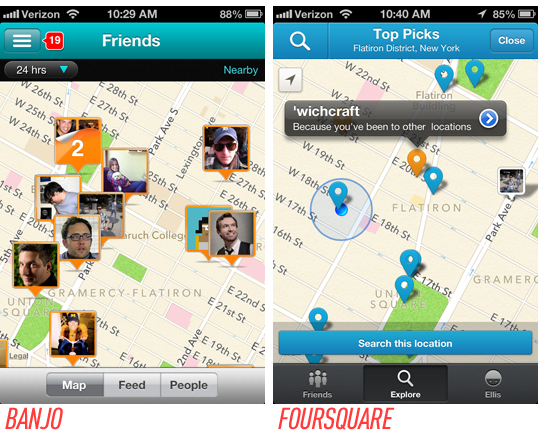 Sonar, a New York-based startup, seems to have found a niche finding friends you already have, but across more than one social network. While Foursquare and Highlight only let you see the location of people signed up for those services, Sonar ties in Facebook, Twitter, LinkedIn, and Foursquare, to see where people you know (and people you follow who've posted their whereabouts publicly) are hanging out near you. "We're not trying to be a people discovery app," CEO Brett Martin says. "The only time you'll want to be notified about someone you might really like near you is dating." A spokesperson for the company elaborated: "We recognize that our users aren't as interested in strangers, so we focus on friends," she said. More than 255,000 Sonar users open the app every day — up from less than 50,000 a month ago thanks to the company's new Android app — and that's only counting those who've connected Facebook as a network. People use Sonar to see who's close by at conferences, concerts, and other public spaces where it would be fun to find people you know. "Wherever you go, we are pulling in every geo-social signal nearby like check-ins, tweets, etc," Martin says.

"We recognize that our users aren't as interested in strangers, so we focus on friends."

Even more elaborate than Sonar is Banjo, which lets you view location-tagged posts from Facebook, Twitter, LinkedIn, Foursquare, Instagram, and Google. Banjo can help you meet people, but it's much more useful as a way to transport yourself to an event and see what's going on. Fox News and CNN use Banjo to view tweets and Facebook posts from people at crime scenes. People from 190 countries around the world used Banjo to view tweets and images posted from within each Olympic venue this summer. "We're solving for there, and not for here," CEO Damien Patton says, "because 80 percent of the time our normal ‘here' is our place of work or at home. There isn't enough changing ‘here' to continually warrant going into a product to see what's new around you." Banjo capitalizes on users' "fear of missing out," letting them pick any place in the world and seeing location-tagged content served in real time from that location. "The biggest difference between us and competitors is that we're a technology company," Patton says. "We're building through technology, and not just consuming APIs."

"We're building through technology, and not just consuming APIs."

"The next ten years is about carrying around sensors and sharing data about our environment," Sonar's Martin says, and most of the "people discovery" apps have already made changes to that effect. And that's the key here: pegging a real utility that brings users back to the app because it's a service app, and not an entertainment app. There is always the chance that Davison is right, and focusing on one network singularly will pay off in the long run. Imagine a world where you walk into a room, open Highlight, and are instantly able to find out how you met "that guy" at the other side of the room. But it seems that at least for now, the public as a whole isn't interested, much like they "weren't ready" for Apple's Newton tablet when it debuted. Davison understands that. "It's a lot like when the Web emerged in the early 90s: It took us some time to figure out the norms, use cases, and new ways of using this technology, but eventually we did, and the world was forever transformed."