AMD has posted a video on its YouTube account that points to a hardware announcement on October 9th. Titled TECHnically Beyond Explanation, the clip is a parody of supernatural reality shows like Ghost Hunters. Set in an AMD test facility, it follows two "adventurers" that discover a mysterious laptop inside an old tower PC (something we've seen AMD do before). The pair are dumbfounded to find that "it's cold," and then the theatrics step up a notch. One of the adventurers proclaims "it's been mutated!" before her colleague says "it's not a laptop!" The video ends with a message telling you to check AMD's YouTube page on October 9th where, presumably, the mystery will be solved.

Aside from a very silly trailer, what do we have here? The "it's cold" mention seems to imply that AMD will be utilizing a low-power chip — perhaps its Hondo APU (Accelerated Processing Unit) that's scheduled for a 2012 release. The Hondo promises to be a power-efficient chip with an onboard GPU that supports DirectX 11. Even more intriguing than the processor is the form factor of the "mutated" device: when one of the actors opens the hinge, there seems to be a screen where the keyboard should be. Is AMD about to show off a dual-screen device? Or is it simply a tablet inside an empty laptop inside an empty PC tower? We'll find out this Tuesday. 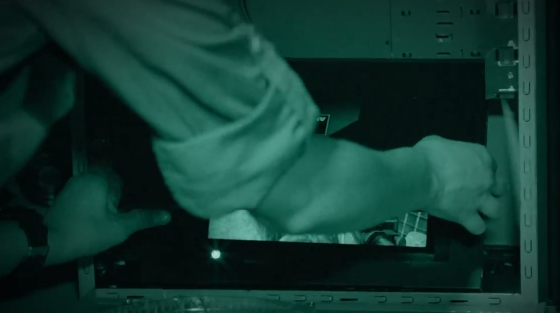 Update: And the mysterious hybrid is… a tablet with AMD's Z-60 "Hondo" APU.