Your Klout score must be greater than 35 to read this

Hated by some, social scores are becoming the new normal on the web

Share All sharing options for: Your Klout score must be greater than 35 to read this

Microsoft recently invested in Klout, the first time the tech giant has funded a social startup since it put money into Facebook back in 2007. The company is part of an emerging class of startups like PeerIndex and Kred that aim to measure your online "influence": a statistical take on how many people you reach through social media, how much they trust you, and on what topics. Klout, the largest of these startups, will get a big push into the mainstream through a new partnership with Bing, which will feature Klout scores as part of its search results. As Google’s Pagerank defined the last decade, the thinking goes, "people rank" will define the next.

Despite its growing business success, you would be hard pressed to find a more loathed startup. In the "criticism" section of its Wikipedia page the company is described as a "evil" form of "internet herpes" that preys on user’s social anxiety. There are clearly still a few kinks in the system. On Klout, where my score is 65, I’m cited as influential on the topics of Forbes, Branding, Boats and Manhattan. In reality I write for The Verge about technology, was born and raised in Brooklyn, and couldn’t tell the difference between a sloop and schooner to save my life.

You too can be a digital pitchman in 140 characters or less!

"It’s a tough challenge," said Marissa Campise, a tech investor at Venrock who helped lead the last two funding rounds in Klout. "How do you put a number next to somebody’s name and not piss them off? But 'influence' is the reality of the increasingly social paradigm on the web. Klout's goal is to help consumers master that, even if that means showing them some tough love." The company could easily keep its rankings private, sharing them only with marketing departments interested in appealing to influencers. But CEO Joe Fernandez insists that is not the point. "We have always been about the consumer, first and foremost. The internet has democratized influence, and we want to help everyone share in the rewards." Somesh Dash, a tech investor with IVP who backed Klout, says the two parts of the business model are developing at different rates. "For a company with around seventy employees, Klout's impact on the web is very impressive. The value for advertisers is very clear. For consumers, it's still developing."

It’s important to acknowledge this isn’t just some Silicon Valley pipe dream. Rod Sterling, the VP of emerging technologies at IBM, spends most of his days thinking about big data and sentiment analysis. He has no doubt that the kind of work Klout is doing will be big business. "I hear over and over from the small, medium and big sized businesses who are clients of ours, ‘How can we find the most important people who are talking about our products or services?’ They want to understand reputation and influence." It’s not just the sheer number of followers a person has, an easy metric to inflate. What really matters is how far across the echo chamber of the internet your voice can carry, and whether your audience trusts what you say. "This is a very important problem that I think every big company is pondering," said Sterling. Even Google, which held search so sacrosanct, has introduced social results around topical authorities. 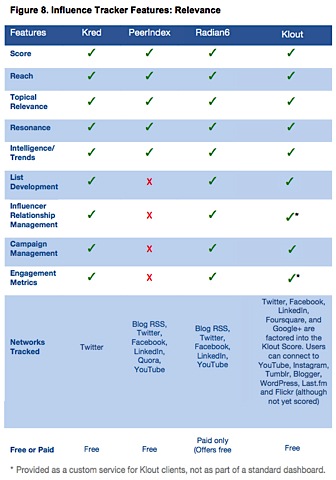 Chart via Altimeter Research - The Rise of Digital Influence

In an ideal world this would create a virtuous back and forth between brands and consumers. The Fancy, an e-commerce startup, pays users cold hard cash every time their tweets and status updates lead to a sale. "We’re making it simple for our users to transform their online influence into real money," said Fancy founder Joe Einhorn. "That’s something that anyone, no matter how web savvy, can see the value in." Klout and its peers have a similar system for distributing "perks". PeerIndex makes this compact explicit. "We give you exclusive access to products from your favourite brands," reads the website. "The more active you are on social media, the more stuff you will receive." You too can be a digital pitchman in 140 characters or less!

"How do you put a number next to somebody’s name and not piss them off?"

The drawback, of course, is that this kind of practice encourages users to artificially inflate their own rankings. Klout users can gain status when people give them "+K" in certain topics. I found Klout user Kathy McCrae while searching for people influential on the topic of food. On her Twitter feed, McCrae doesn’t discuss many recipes. Instead there is an endless stream of +K posting as McCrae and other shower one another with digital compliments, inflating their appearance as "influencers". 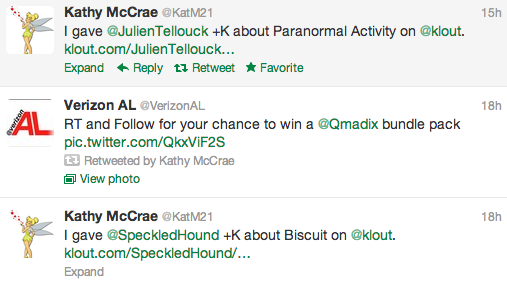 Marshall Kirkpatrick, a former tech journalist, announced on Friday that he had raised $1 million from Mark Cuban and others to build Little Bird, an influence tracker that helps users find the most trusted experts in certain topics. "We're working hard to try and avoid building a douchebag machine that encourages users to engage in self-promotion in order to earn rewards," Kirkpatrick told The Verge. "The only way to become more relevant on Little Bird is to win the trust of your most influential peers." Social capital will become an increasingly important part of running a business or brand, says Kirkpatrick, but he sees little value in measuring raw popularity, as Klout and Kred do. "We think its much more valuable to tell you, 'These are the biggest names in cloud computing, and these are the twenty people they follow who nobody has ever heard of.'"

When online influence becomes something that can be quantified, boiled down to a two digit number like a Klout score, it inevitably turns into a double-edged sword. The press reacted with outrage recently when Joe Fernandez tweeted about a Salesforce posting that said it would only consider job seekers for a position who had a Klout score of 35 or more. Students were up in arms when Todd Bacile, who teaches marketing at Florida State University, decided to start grading his class based on their Klout score, after it was cited by multiple hiring managers as part of the interview process. "If my marketing students are going to use these tools in the workplace, they should have firsthand experience doing so with their personal brands," said Bacile. It’s this element of Klout that disturbs many. Do we really want another number, along with our blood pressure and our credit score, that we need to worry about improving?

Over time, says IBM’s Sterling, measures of our influence or reputation will become an accepted facet of our digital lives. "No one is surprised anymore that you need to think about what happens when a potential employer Googles your name. Just as we curate that information, people will work on their social scores." Hiring and firing right now, however, based on something like a Klout score, would not be wise. "Klout is one of the leaders in building this technology, but its far too loosey goosey to be making business decisions with today," says Sterling.

The score is just one part of what Klout offers, argues the company’s CEO and Founder Joe Fernandez. "People get hung up on the number, but we are also giving people a lot of context around your passions and areas of expertise. I think we’re still just at the tip of the iceberg. We’ve got a lot of work to do educating people about the value of understanding their online influence." His comments highlight the odd flavor to Klout’s success. The company is mainstream enough to be referenced in a New Yorker cartoon, but only as a punchline that mocks its score as meaningless in the real world. "I certainly never expected to be in the New Yorker," says the eternally optimistic Fernandez, when I mentioned the cartoon. "It feels good to be noticed." 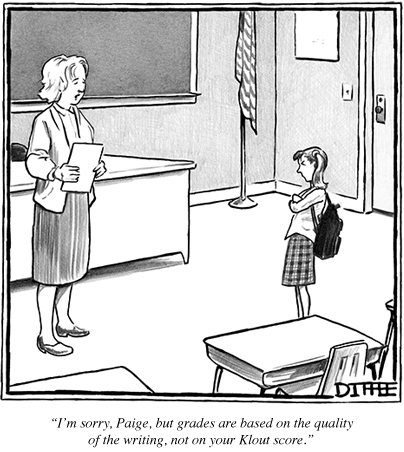