A tactic that has worked for medical researchers could soon help patients, too

Modern medicine is amazing. However, it has one limitation: it only works if patients take it. That's more of a challenge than you might think, says the team behind AdhereTech, a New York-based startup that has developed a smart pill bottle that constantly monitors how much of a medication is left in a bottle and transmits that data over 3G. Current levels of adherence, as it's called when a patient sticks to his or her prescribed regimen, are as low as 40 percent for some medications. But with AdhereTech's patented technology, those rates could increase to 90 percent.

"People trying to track adherence, they either rely on patient self reporting, or they do a retroactive pill count," said Grant Mitchell, one of the three cofounders of AdhereTech. "It's just so archaic considering the technology we have now."

AdhereTech's battery-powered smart pill bottle measures the amount of liquid or solid medication in a bottle using capacitance, the same technology used in touch screens. The sensors are between plastic in the bottle's walls so they never touch the meds, but can accurately measure down to one pill of solid medication or one millileter of liquid medication. The bottle then transmits the data to the patient in the form of a text message or phone call reminder. The patients can also have the data sent to their friends, family, or doctor.

Patients can also have the data sent to their friends, family, or doctor

The technology has appeal for pharmaceutical companies, doctors, and patients, and one study showed that increased adherence for diabetes medication alone could save $8.3 billion in wasteful costs to the system. One meta-analysis estimated the cost of non-adherence at between $100 billion and $289 billion a year. However, this technology still hasn't reached the broad consumer market.

Electronic pill trays — basically just digitally enhanced versions of that well-known box labeled with the days of the week — are already available. High-tech pill bottles, however, are not. AdhereTech's main competitor is the Vitality GlowCap, another smart pill bottle already on the market. The GlowCap beeps and glows when a patient is scheduled to take a pill, stopping only after the bottle is opened. The cap also has a button that orders a refill.

Vitality GlowCaps went on sale on Amazon for $10 per cap plus a $15 per month subscription in 2011, with AT&T's wireless network transmitting the data, which was announced around the same time as the company was acquired for a reported ten times return on investment. However, after reassessing its retail strategy, Vitality GlowCaps were pulled from Amazon and are no longer available for sale directly to consumers. The caps are mostly being used in studies and clinical trials, where researchers use smart pill bottles to track adherence. 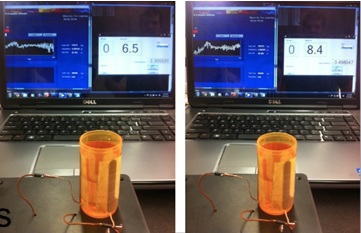 Studies that use Vitality GlowCaps show rates of up to 99 percent adherence, making a strong case for bringing the technology to the market. There's just one problem: "It only knows if you open the bottle, not whether you take the pills," writes eWeek. "Just the cap opening is more of an approximation than actually knowing what's in the bottle," Mitchell said. "You don't know if the patient overdosed, under-dosed, spilled a bunch of pills, or took two instead of three."

For that reason, AdhereTech believes its more precise bottle will prove more effective. The founders have been working on the company for a year and a half and recently graduated from the health-focused startup incubator Blueprint Health. After pitching a crowd of investors and industry professionals at a Blueprint demo day, the AdhereTech team ushered a handful of investors into a backroom and showed them the prototype, dropping pills in to demonstrate how the bottle monitors its contents.

AdhereTech is raising $750,000 in seed money in order to refine the prototype and get it on the market. The plan is to distribute the bottle first through specialty pharmacies that carry more expensive cancer drugs, a market where non-adherence has steep costs for patients and pharmaceutical companies. AdhereTech's founders have been in talks with pharmaceutical companies, which will be the ones pushing adoption of AdhereTech bottles through pharmacies and therefore to patients. "Our main focus is getting into patients' hands," Mitchell said.

"Our main focus is getting into patients' hands."

Pharmaceutical companies stand to gain when patients take their meds as prescribed because it makes drugs more effective and brings patients back for refills on time. AdhereTech is hoping that pharma companies will request or require that their drug be dispensed in AdhereTech bottles, and spring for the marginal cost so that patients don't notice a price difference. When a patient arrives to pick up his or her medication, the pharmacy will program the dosage, schedule, and notifications into the bottle. AdhereTech also has an open API that will allow developers to make smartphone and web apps to help patients track their medications.

Adherence is a complicated thing. Most nonadherence is due to forgetfulness, but it can also happen when a patient is confused about a medication, mistrusts his or her doctor, or wants to avoid side effects. When a patient forgets a dose, AdhereTech follows up and asks them why. That data will be tallied, anonymized, and made compliant with standards under the Health Insurance Portability and Accountability Act (HIPAA). Once AdhereTech's bottles are on the market, it will have a trove of precise adherence data that will have ripple effects across the industry.

"As the technology improves and cheapens and miniaturizes, it's going to move from the more niche markets into maybe potentially every bottle that you ever get from the pharmacy," Mitchell said.