iPad mini: rounding up the rumors

iPad mini: rounding up the rumors

What we know about Apple's smaller tablet

If there were ever any lingering doubt that we're no longer in the era of Apple launching each new product under an opaque veil of secrecy, last month's iPhone 5 announcement swept it away for good. Almost every detail of Apple's latest phone had been thoroughly leaked before the reveal, making it a somewhat less exciting event than in the past; it's clear that, going forward, this will likely be the norm. That brings us to this month's presumed unveiling of a smaller iPad, already extensively leaked and dubbed the "iPad mini" by much of the world.

There's no doubt that sub-8-inch tablets have their audience

Rumors of such a product have floated around for some time, despite Steve Jobs' well-publicized reservations about users needing sandpaper to file their fingers down. After all, the only Android tablets to gain traction — Amazon's Kindle Fire, Google's Nexus 7 — have adopted this form factor, allowing them to compete on price while differentiating themselves by providing a lighter, often more convenient experience. While it may be going too far to suggest that Apple feels threatened by these products considering the stratospheric iPad sales, there's no doubt that sub-8-inch tablets have their audience — an audience that could well prove receptive to a lower-cost iPad. Unlike the iPhone 5, which was a sequential update to a series of devices, a smaller iPad would represent an entry into a new product category for Apple. As such, it's not quite as easy to predict the details of this device, but nevertheless we're here to round up what we know and try to paint a picture of the iPad mini.

What we (probably) know

For starters, how do we know it's coming at all? The first credible rumor came, as it often does, from the Wall Street Journal back in February. That report from Lorraine Luk stated that Apple was testing a smaller iPad with a screen size of "around eight inches," though it was careful to note that the device may never come to fruition. Two months later Daring Fireball's John Gruber went on the record as saying that Apple had been testing a 7.85-inch iPad mini prototype. Again, Gruber didn't go so far as to state that the product was definitely on the way, but he was the first to put that unusual screen size out there.

Then, soon after Google announced its Nexus 7, came solid reports that the smaller iPad mini would in fact see release. Bloomberg reported in early July that a device with a non-Retina display between seven and eight inches would come out this year, and the Wall Street Journal's Luk followed up a day later with a production date of September and named the display's suppliers as LG and AU Optronics. The New York Times soon gave a report of its own that specifically called out the 7.85-inch screen size just as the Nexus 7 went on sale. As for the iPad mini's release date, an AllThingsD post in August claimed it would be unveiled in October, and this was corroborated by a Bloomberg report a week later that also mentioned the 7.85-inch screen size. Finally, last week Luk at the Wall Street Journal said for the first time that the device had gone into production. All of this seems to point pretty conclusively to a 7.85-inch iPad announcement this month, then — so what will the device actually be like? 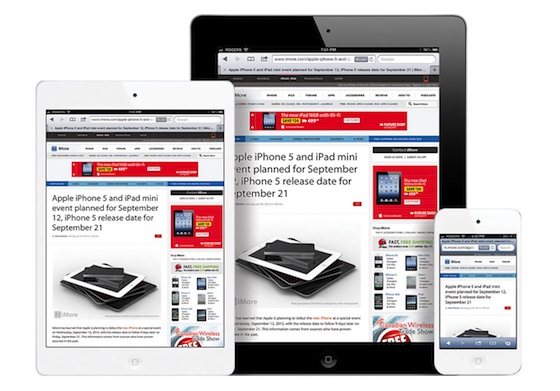 The current iPad is an exercise in industrial minimalism: a sparse glass front with a single home button and a bezel of equal thickness on all four sides, and an aluminum back panel adorned with the bare minimum of controls. Of course, the most obvious feature is the screen, so any discussion of a new model should start there. The reports alluded to earlier almost unanimously state that the iPad mini will feature a 7.85-inch display, but it's less clear what resolution or aspect ratio this display will have — all we heard on that note was Bloomberg's report of a lower resolution than the new iPad's Retina display.

Lower quality than the Nexus 7 and Kindle Fire HD?

John Gruber believes that it'll be a 4:3 1024 x 768 screen just like the iPad 1 and 2's, with the same 163 ppi of the pre-Retina display iPhones. The theory goes that it could technically be the same display, since screens aren't manufactured at their final size but cut from large "sheets." Maintaining the production lines would allow Apple to reduce costs in the sort of move that Tim Cook became known for in his COO days, and would also explain how the company arrived at the 7.85-inch measurement. It's an unusual size that will make the device almost 40 percent larger than 7-inch competitors, as pointed out by Twitter user Trojankitten.

If the iPad mini's display really is cut from the same cloth as the iPhone 3GS', though, it will likely be significantly lower quality than any iPad to date, not to mention recent competitors such as the Nexus 7 and Kindle Fire HD. While the decrease in screen size would result in a sharper screen than the original iPad, it wouldn't be an IPS display and could have issues with viewing angles and resolution next to certain 7-inch rivals. This wouldn't be ideal for a product that would otherwise make sense as a more comfortable one-handed reading device, but of course it's entirely possible that Apple could use a brand new, higher quality component with the same mooted specifications. The Wall Street Journal reported that the company has ordered 10 million units for the initial Q4 production run, so there may well be enough bulk-buy discount to keep costs down regardless.

iMore has a slightly different view, however, taking Gruber's idea and running with it to present multiple possibilities. Cutting the iPad mini screen from the same slabs as the iPhone 4S or fourth-generation iPod touch's would provide another convenient option for Apple to go with a 7.85 screen while also allowing for a 326 ppi 2048 x 1536 Retina display. The fourth-generation iPod touch's screen isn't IPS and suffers in contrast and viewing angles next to that of the iPhone 4S, but it could be a way for Apple to tick the all-important Retina box while saving on costs.

It's worth questioning how viable a Retina display would be in the iPad mini. The new iPad required a beefed-up A5X processor as well as a huge increase in battery power to drive its display (and LTE capability), and Apple was forced to increase the device's thickness and weight from the iPad 2. Even then, the new iPad suffers from occasional performance handicaps next to its predecessor, especially in high intensity applications such as games. The cost of producing such a high-density display must also be taken into account when considering the iPad mini's sub-$200 competition. If it's to be designed as a thin, light, and inexpensive reading device for those who find the current model too heavy for one-handed use — and that seems a pretty safe assumption — the inclusion of a Retina display may well come with too many compromises for this year's model.

A Retina display may well come with too many compromises

Retina or not, there's a reason that only a couple of possible resolutions are being considered by most; it seems unlikely that Apple would fragment its most valuable asset in the huge library of ready-made iPad software. That doesn't mean, however, that the iPad mini will look just like a shrunken-down iPad. In fact, signs point to a proportionally narrower device closer in scale to an iPod touch, or indeed a Nexus 7. 9to5Mac's sources have told the site that the iPad mini has thinner bezels on the sides than at the top and bottom, which backs up earlier leaks of case renders and design schematics. We've also seen alleged parts from Ukrainian iPhone that show a black anodized aluminium back plate and white front panel for a 4:3 screen, though these were posted alongside a non-matching display so should be treated with appropriate skepticism. 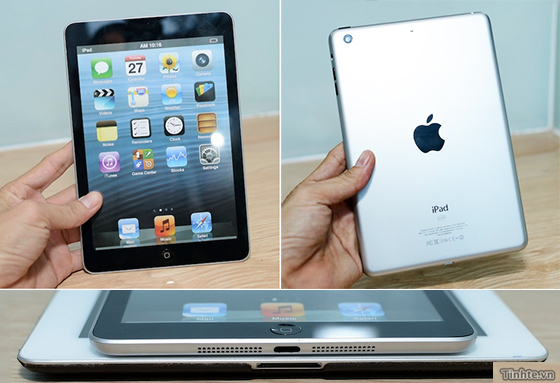 A fully-formed mockup, similar to the replica iPhone 5 we saw at IFA, appeared on French website Nowhere Else last month and gave us a clue as to how the final iPad mini might look. Subsequently, Vietnamese site Tinhte.vn uploaded some high-quality photos and a video of a similar mockup, which may offer the most accurate look yet at how the final iPad mini will turn out.

According to AllThingsD, the iPad mini's industrial design is "promising" and "demands a lot" of the manufacturers. Mockups show a flat back panel, unlike the tapered design of the current iPad, and iMore has heard that the mini will be "almost the exact same thickness" as the iPod touch — though this was a report from August, before the new 6.1mm-thick touch was unveiled. If iMore's sources are to be believed we'll be looking at a device around 7.2mm thick, which would make it the slimmest comparable tablet we're aware of. Elsewhere the iPad mini looks to have both front- and back-facing cameras, and unsurprisingly the new Lightning dock connector port that made its debut with the iPhone 5.

If these leaks are as accurate as what we saw before the iPhone 5, we're left with two major questions about the iPad mini: its internal specifications, and its price. There haven't been many credible rumors about the former, but we think Apple's 32nm dual-core A5 processor would be a good bet for a device that will strive to be economical on power, size, and cost. That brings us to how much you'll pay for it, and that's something we'll almost certainly have to wait for Tim Cook to take the stage before finding out. Somewhere between the $199 Nexus 7 and $399 iPad 2 seems a given, but beyond that it's anyone's call — the iPod touch covers that exact same price range, which could prove an interesting dilemma for both Apple and its customers. Chances are we won't have long to find out.

More from this stream iPad mini: rumors of a smaller Apple tablet