Windows 8 won't be formally available until October 26th, but over the last week or so we've had a chance to test out one of the first round of devices optimized for the new operating system, the Acer Iconia W510. The convertible, laptop / tablet hybrid will be on sale November 9th starting at $499, and is a pretty good indication of the Windows 8 devices we're going to see this fall.

Since the software on the W510 isn't yet complete — Microsoft and its partners are evidently using every available day to fine-tune the new OS — we couldn't give the W510 the full review treatment, but we did finally get to spend time using Windows 8 with a device that's designed specifically for it. Read on to see how it all went down.

Even after spending a lot of time with the W510, I don't know whether to call it a tablet or a laptop. Rather than combine the two words into some terrible portmanteau like "tabtop," let's just say it's impressively capable as either one. It's a 10.1-inch silver and white slate, with a black bezel around the display that contrasts really nicely with the lighter colors of the sides and back. The 1366 x 768 display looks great, with accurate colors and good viewing angles that show off the colorful Windows 8 UI nicely. There are two cameras on the device, and as with most tablets both are usable in a pinch but neither is anything special. At 1.3 pounds and .35 inches thick it's fairly average for a 10-inch tablet, though the flat edges make it feel a little boxier than most. It's solidly built, and I really like the way it looks.

If you never saw the W510's keyboard dock, you'd just think it was just another tablet. But when you connect tablet and dock, the device feels every bit like a laptop, or at least a three-pound netbook. The silver dock with white keys and accents matches the W510 aesthetic nicely, and adds a trackpad plus six rows of QWERTY keyboard to the equation. It also has a USB 2.0 port — add that to the microSD, Micro USB, and Micro HDMI ports on the tablet itself, and you have a pretty full complement of connectors. 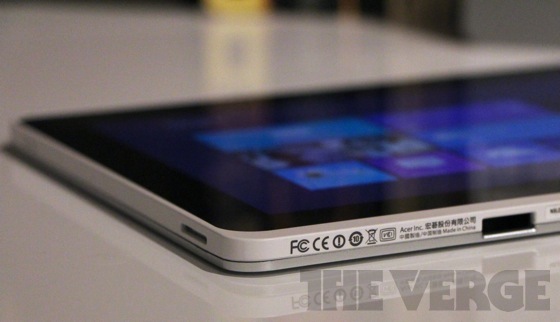 The only real downside of the dock is the hinge, which feels really poorly constructed. On the one hand, it's way too stiff — you can rotate it up to 295 degrees so the dock can double as a viewing stand, but moving the hinge at all takes so much work you'll be sure it's going to break. On the other hand, it doesn't keep the screen very still, so it wobbles every time you touch it. How it's both too strong and not strong enough, I'll never know. On the plus side, the tablet does go in and out of the dock easily, and it won't come out unless you want it to.

Finding the right size for a convertible might take a while

This type of hybrid forces a few key design decisions, most notably how large to make the screen. 7 inches is great for a tablet but tiny for a laptop; 13 inches is a perfect laptop size but is massively unwieldy as a tablet. Unfortunately, 10.1 inches doesn't seem to be the right sweet spot – the W510 is a nice size, but it doesn't afford enough room for a full-size keyboard or trackpad, so you get small, cramped versions of both that are hard to get used to. After using the W510 for a week, my MacBook Air feels positively spacious by comparison. I think 11.6 inches might turn out to be the right size — a little big for a tablet and a little small for a laptop, but a good enough experience in both cases.

Since Windows 8 isn't yet publicly available, Acer let us know that the software and drivers inside the W510 aren't yet final. They must be close, though, because Windows 8 is already remarkably smooth on the device. The Intel Atom Z2760 processor inside the W510 isn't particularly impressive hardware, and neither is its 2GB of RAM, but Windows 8 doesn't seem to need much more. Whether I was switching between apps, watching movies, or just playing around with the UI, every animation and transition was snappy and smooth. There are still clumsy moments — it's oddly difficult to move tiles around the Start Screen, for instance, and it occasionally takes a while to resume from sleep — but those are few and far between.

There's an awful lot to learn in Windows 8

One thing really sticks out, though: there's a giant learning curve with Windows 8. Understanding the gestures is complicated enough, since there are few cues that you have to swipe from the edge to do things. Deciphering the corresponding keyboard shortcuts is even worse — plenty of people will have trouble figuring out that Win + C brings out the Charms menu, and will have even more trouble remembering. The W510's keyboard has a lot of function keys that help surface these menus, but it's still not a perfect system. You can use the OS without knowing the shortcuts, but it's a rough experience: you'll spend a ton of time going to and from the Start Screen, launching and re-launching apps. 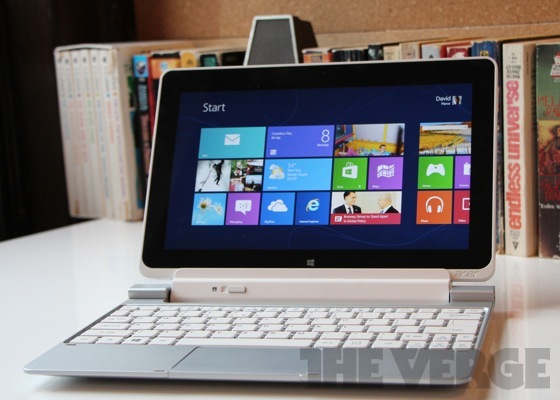 Once you get used to the user interface, though, Windows 8 feels impressively at home in either a tablet or a laptop. You can dock and undock the W510 without any hiccup in its operation — it just dings quickly to let you know what's going on, but your movie or music keep on playing. I was constantly switching back and forth, pulling the tablet out to read anything longer than a tweet and then popping it back in to respond. Even when docked, I found myself mostly using the touchscreen, which feels a little faster than mousing around; that might change when Acer's drivers update to support trackpad gestures, but I'd still recommend sticking with a touchscreen device when you upgrade to Windows 8.

There are going to be plenty of devices in the coming weeks that look a lot like the Acer Iconia W510. Whether or not the W510 is the best in its class remains to be seen — for one thing, I'm itching for a slightly larger device like the Asus Transformer Book. But using the W510 has made one thing abundantly clear: the convertible, laptop / tablet hybrid is a perfect fit for Windows 8, and Windows 8 makes this form factor sing in a way Android and other operating systems just can't. We'll be spending time with many other devices like it, but the W510 has certainly whet our appetite for more Windows 8.

Update: an earlier version of this article said the W510 has a full-size SD card slot. It doesn't.