When Windows 8 and Windows RT arrive on October 26th, there's going to be a practically unprecedented array of devices to consider, each with their own tradeoffs in performance and battery life. If you're interested in tablet computing, three stand out, though. ARM chips like Nvidia's Tegra 3 will bring flashy Windows RT designs to the fore like the Microsoft Surface and the Asus Vivo Tab RT, while Intel's Clover Trail Atom chip will try to do the same for Windows 8 with a whole host of new modular slates. What's the third, you ask? AMD's Hondo processor. Today, AMD is formally announcing its Z-60 "Hondo" APU, which has a rather different claim to fame. AMD claims that the Z-60's integrated Radeon HD 6250 graphics have five to six times the performance of Intel's last-gen Atom chips, such that a Z-60 system can play Call of Duty: Modern Warfare 2 at 1024 x 768 resolution at 30 frames per second.

The secret is the strategy: shrink, rather than grow. While Intel's Clover Trail is a more powerful version of its Medfield smartphone silicon, AMD's Hondo is a more power-efficient version of its low-end laptop processor. Just like the AMD C-60 "Ontario" processor you'd find in netbooks last year, the Z-60 is a dual-core 1GHz chip with 80 graphics cores for light video and gaming duties. But, at a comparatively power-efficient 4.5W TDP (compared to the C-60's 9W TDP) it requires even less cooling. Still, it may trail behind Intel a bit: Intel's promising 8.5mm thin tablets, while AMD is targeting a more conservative 10mm at present. 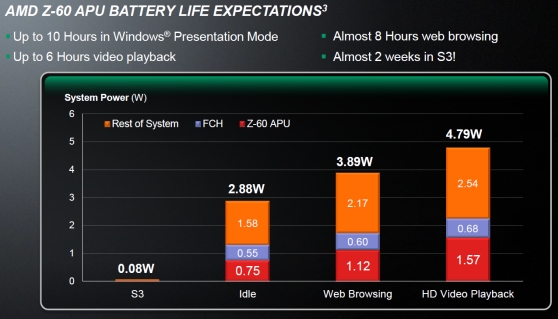 Unfortunately, it sounds like AMD's Hondo is well behind Intel's Clover Trail in the battery life department. AMD claims the Z-60 gets up to 6 hours of 720p HD video playback with a 30Wh battery, but that's with the screen set to a dismal 60 nits of brightness. Meanwhile, Intel says that with the very same 30Wh battery and 200-nit screen, Clover Trail can manage 10 hours of HD video. Intel says its tablets will last three weeks on standby, while AMD claims two weeks of standby — you get the picture.

The most important questions, though, are still waiting in the wings. We still don't know how much power a portable Windows 8 machine will really need going forward. Clover Trail tablets are rumored to be relatively expensive too, with Samsung's entry starting at $649, more than an iPad or most netbooks have been. Traditionally, AMD has managed to successfully compete with Intel on price, and with Hondo it may offer a little more raw horsepower too. If that's what the market ends up wanting, AMD might be in the right position. It seems that AMD is having a bit of trouble proving that to OEMs right now, though. While Intel has 20 Clover Trail tablets on the way, AMD wasn't able to confirm a single manufacturer on board, saying only that we should expect products on shelf around the time of the Windows 8 launch and that the company expects a "plethora of designs" next year.

"We're going to be very focused on the numbers of partners we're working with," a representative told us. It sounds like AMD still has a lot of mountain to traverse.

Update: It turns out AMD's "spooky" teaser from the other day was for the already-announced Z-60 APU, and not one of our more fanciful imaginings. Check below to see how the story concludes.