Evernote for Mac gets major overhaul in version 5 beta

Evernote for Mac gets major overhaul in version 5 beta

Evernote has launched a new beta version of its Mac app. Version 5.0 is a huge reworking of the note-taking service's interface that, even in this early form, looks to be a big improvement. Evernote claims that there are over 100 new features, but we're not counting — the overall result is that the app has been redesigned from the ground up with a much more usable interface than the previous, excessively cluttered iteration.

Key to this is the left sidebar, which has areas for recently-edited and often-accessed notes, along with big buttons to switch between viewing tags, notebooks, and individual notes. The central panel features a card-like interface for selecting notes, and on the right there's an expanded view of the note you've selected. It's a logical and attractive design that makes organizing your notes a lot simpler than before. 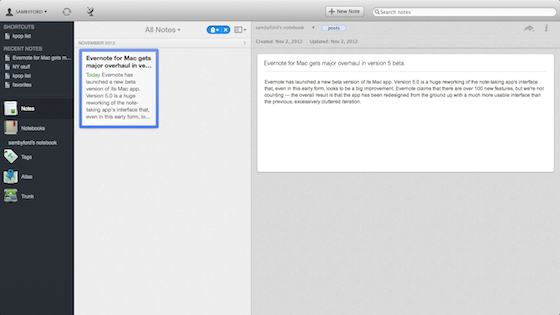 As for creating notes, that's been enhanced too with a pop-up window that looks like a miniature word processor. You can bring this up in full-screen mode to aid concentration, though you'll still have the essential formatting options beyond something like iA Writer or Byword. There's also an option to strip all formatting out with a single click, leaving you with plain text. Other features include improvements to search, Notification Center integration for shared notebooks, more keyboard shortcuts, and Atlas, which plots your notes on a map iPhoto-style (assuming you've enabled location tracking).

Evernote hasn't confirmed when version 5 will leave beta, but says some users may want to wait "a bit" for the final update to become available. We didn't notice any standout bugs in our brief period with the app, for what it's worth. If you want to get on board now, go to the Software Update panel in the current app's Preferences and allow for beta updates. This won't, however, work with the Mac App Store version of Evernote.