The living room's been something like a holy grail for electronics manufacturers for decades. It's the place where we spend hours every day sitting in front of our TVs, passively flipping channels and watching ads. Even as our smartphones and tablets vie for our attention, TV dominates: Americans still spend an average of 4 hours, 38 minutes a day watching the boob tube. Netflix, on the other hand, which is so popular as to command as much as half the US’s internet bandwidth, only commands 11 hours of our attention per month.

Set top box creators have come from every angle, vying for a piece of this lucrative pie. Roku, Boxee, Western Digital, Apple, Netflix, Hulu, Vudu, TuneIn — on and on the list goes, companies looking to get onto your TV. But these devices create as many problems as they solve, though, adding new remotes, inputs, and interfaces into a viewing experience that's supposed to be simple.

Theoretically, that puts TV manufacturers at an enormous advantage: if Samsung can design the whole interface, from Netflix to your DVR, it should be able to create a seamless experience that improves upon the disjointed universe of set-top boxes. Sony or Vizio could overlay content on top of your TV, so you can watch a show while reading tweets about it; Samsung already has a great ESPN app that just runs a ticker below whatever you're watching. Your set-top box can't do that, since it's on its own input and takes over the whole screen. Just about every manufacturer bought into this logic, and over the last couple of years store shelves have flooded with internet-connected, content-streaming "Smart TVs." But each of these companies has tried to develop its own interface, its own style, and every attempt has fallen flat. Smart TV interfaces are almost universally slow, clunky, and unnecessarily complex.

This is the first step in a process we’ve seen many times over. With PCs, fragmentation reigned as manufacturers worked on their own operating systems and ecosystem — but when Microsoft’s Windows united disparate hardware onto a single platform, the whole industry took off. The same happened with cell phones, as we shifted from Brew and its many competitors to Android and iOS. Rich app ecosystems develop when a few platforms dominate — selling one app to everyone is far more appealing than making individual apps for each tiny group of users.

Search and TV: what could’ve been

That’s what Google TV was supposed to be. "TV meets web. Web meets TV," the company said at its May 2010 announcement. It seemed so obvious — Google’s search expertise could unify our many content sources, and its Android-based OS could provide a single platform that would work on TVs, cable boxes, and everywhere else in our living rooms. It also has a full browser, and a remote control with far more power than your average four-button clicker. It shouldn’t matter whether we want to watch something on Netflix, Hulu, YouTube, or DirecTV, right? We just want to watch it on our TV, and Google wanted to bring it all together.

Google entered the market with a smart, fresh idea of how to find and organize your content. But thanks to a combination of lackluster hardware, weak manufacturer support, a small app ecosystem, and an interface that simply couldn’t deliver on its promises, Google TV went nowhere. The OS has its devotees, and has certainly improved over the past two years, but Google may have missed its window into the living room.

Meanwhile, we’re increasingly using other devices to do what our TV already can. More people use the Xbox 360 for entertainment purposes than for multiplayer gaming, and its viability as a set-top box is only increasing. Apple sold five million Apple TVs this year, nearly doubling the figure from a year ago. The key feature of the new Boxee TV is its ability to watch NBC, CBS, and other free channels you can already access — Boxee’s just promising to do it better.

So why, when we can watch Netflix on our TV, do we spend $100 on a set-top box... that lets us watch Netflix on our TV? It's the interface. They use your existing remote, and force constant up-up-right-right-down-left interactions to get anything done — have fun entering a Wi-Fi password. Even Google TV, the feature-rich OS that combines your TV and the internet better than any other, is cumbersome to the point of being unusable.

Meanwhile set-top boxes like the Apple TV and the Roku are simplifying at every turn. You can't do much on an Apple TV, but you can do it all without any training. Roku's remote is simple and geared toward its services. These boxes and others have remote apps for your phone, and Apple's leading the charge toward making your TV just a bigger smartphone display, receiving and displaying content as instructed by your phone or tablet.

Jobs didn't promise more features, or a better picture. He promised a setup that would work

In a word, it's about simplicity. We watch TV because we don't want to spend a ton of time finding what we want to watch — we either want to channel-surf or we want Netflix to tell us, and quickly. That's why Steve Jobs' remark to Walter Isaacson is so breathlessly passed around. "It will have the simplest user interface you could imagine, "Jobs said. "I finally cracked it." Jobs didn't promise more features, or a better picture. He promised a setup that would work.

The other problem is more endemic: unlike phones, which we buy every two years and update more than that, the lifespan of a TV is more like seven or eight years. Adoption's been faster in the last few years as HDTV prices have dropped, but just like 3D, Smart TV missed that bandwagon and doesn't appear to be popular enough to support another one. People buy new TVs because they want bigger sets, or thinner sets, or better sets — internet connectivity isn't much of a factor at all, says NPD.

In those eight years between TV purchases, much is also likely to change. Services will come and go, and there’s been little evidence that manufacturers can keep up with the changes. Google TV promised a phone-like app platform where companies control their own services, but with the plethora of TV interfaces that’s simply not feasible for Netflix or Vudu to maintain. The manufacturers aren’t accustomed to building and maintaining apps, either, and their experiences nearly always fall short. 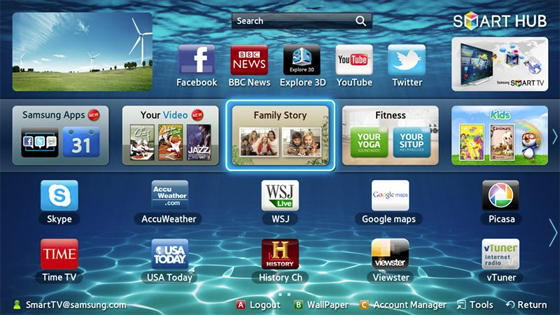 25 million US households have internet-capable TVs, but only 12 million have even connected them to the internet

To some extent, these devices have even caught on. The majority of Samsung's TVs now come with "Smart" features, and PR director Ethan Rasiel said the company has a 60 percent activation rate, meaning three in five people with a Smart TV actually do connect their TV to the internet and use at least one app. But that hardly qualifies as a resounding victory, especially given that Samsung's certainly one of the most successful Smart TV manufacturers. An NPD study paints a slightly bleaker picture — there are 25 million US households with internet-capable TVs, but only 12 million have even connected them to the internet.

NPD also predicted this year that 43 million Smart TVs (basically any TV with an internet connection, which is most non-budget TVs) will ship in 2012, and number will jump to 90 million in 2016, but that growth seems more tied to manufacturers' commitment to the market than customer demand for Smart TVs. But when an Apple TV is $99, the game console you already own is a great set-top box, and it's never been easier to use your phone to control your TV and its content, is there even a problem manufacturers need to solve?

When he reviewed Google TV, The New York Times’ David Pogue drove a stake into the heart of Google TV, and Smart TVs everywhere. "It will probably take a long time, and a lot more refinement, before Google TV is attractive to anyone besides tech-heads — especially when, for only $60, you can get most of the same stuff (Netflix, Amazon on demand, Pandora, Major League Baseball, apps) on a Roku box."

As carriers frantically work to avoid being "dumb pipes," so too do manufacturers fear being "dumb screens." Manufacturers want to control everything about my TV, from the screen itself to what's on it. I'd rather they focused on building a big, beautiful, inexpensive TV that looks and works well. That's all I'm buying my TV for anyway — I already have plenty of ways to watch Netflix.