Tweeting from 30,000 feet just got a little better

I'm writing this from the comfort of a Canadair Challenger, Gogo's test aircraft — a "jet-propelled lab," as they call it — based out of Aurora, Illinois, about a 45-minute drive from Gogo headquarters near O'Hare. The company has been offering internet service on domestic US flights through a number of airlines since 2008, and its engineers use the Challenger to test new services and technologies.

Of course, I didn't drive out to rural Illinois to see the same old Gogo, a source of love (when it works) and hate (when it doesn't) to road warriors and holiday goers looking for a Facebook fix. Today we're seeing "ATG-4," the company's next-generation service that starts rolling out immediately on around 40 of the 1,680 airliners currently in Gogo's fleet — a small number of aircraft from Virgin, US Airways, and Delta are the first to get it with more coming in 2013.

"We believe we can now handle half the plane or more at the same time."

ATG stands for "air to ground," which is how Gogo currently works: the company repurposed spectrum that was freed when Verizon's outrageously expensive (and rarely-used) AirCell in-flight telephone service ended in the last decade. Gogo actually has its own cellular network built across the US — 160-plus stations at last count, all connecting to Gogo-enabled airliners and private aircraft flying overhead. The new ATG-4 system is an upgrade from EV-DO Rev. A (not unlike what Sprint and Verizon use for 3G service) to Rev. B, a Qualcomm-backed wireless data technology that mostly died after Sprint, Verizon, and the world's other EV-DO carriers decided to move to LTE instead. In fact, Gogo's ATG-4 is one of the very few live EV-DO Rev. B deployments anywhere in the world.

In practice, that means that ATG-4 is capable of transmitting at a peak of 9.8Mbps (4.9Mbps per modem, with two modems per aircraft). That's a purely theoretical maximum, which is up from the old system's 3.1Mbps. "We believe we can now handle half the plane or more at the same time," says Michael Small, Gogo's CEO. It's a bold claim when you've got an aircraft full of smartphone-using, iPad-owning, laptop-opening road warriors who probably wouldn't mind streaming a baseball game or a movie.

We started today's flight connected to Gogo's legacy system, which worked reasonably well — I had no issue watching standard definition YouTube videos without much buffering time, and a load of The Verge front page took 24 seconds to completion. Speed tests were consistently under 0.2Mbps with latency over 600ms — not fast by the standards of anyone who's used a cellphone in the past five years, but, you know, we're at 28,000 feet and 500mph, so the rules are a little different.

But Gogo isn't really proving anything here on this tiny Challenger with just nine journalists and Gogo employees aboard; it'a a different ball game on a Virgin Airbus A321 where you might have 60 or more people online. And Small's claim of "handling half the plane" can't be fully verified on this Challenger as we're gliding around the Midwest: Anand Chari, Gogo's CTO, tells us that they can use laptops running scripts to simulate somewhere between 12 and 15 users on the aircraft (basically refreshing websites every ten seconds), which gives us a total load of somewhere around 20 users. 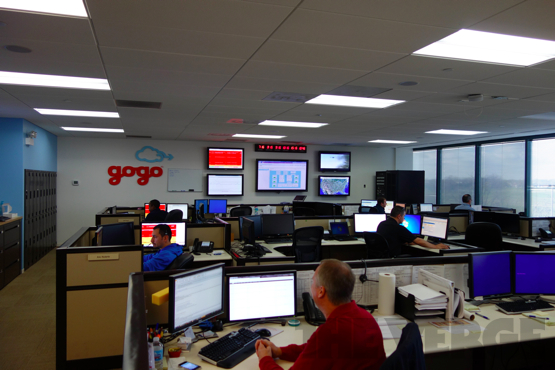 Our next test was with that load simulation system turned on. YouTube stopped being fun here — at best, I could get SD video to play for a few seconds before rebuffering, which rendered it unwatchable. The Verge loaded in 31 seconds; not much worse than the first time, but slow enough so that you're definitely tapping your fingers by the time the site comes up. This is the Gogo experience most of us who've experienced it on commercial flights are used to: a million people trying to tweet and update their Facebook statuses at the same time, making it not so fun for anyone. It's actually kind of amazing how reasonable a slow internet connection for $15 sounds when there's no other option available, you're stuck in a pressurized tube for four-plus hours, and the in-flight movie is The Expendables 2 or the latest Katherine Heigl flick.

Then we were switched over to ATG-4. Without simulated user load, I pulled up The Verge in 18 seconds; once Gogo unleashed its 15 robotic internet browsers, that slowed down to 33 seconds on my first attempt, which was actually slower than the old system by two seconds. I fared a bit better on the second attempt at 24 seconds, but it still wasn't blowing any minds. YouTube wasn't performing any better regardless of user load — I could get 360p going pretty consistently, but 720p (which I'd foolishly believed might be possible on the new system) was continuously rebuffering. Downlink speeds were marginally better on ATG-4: averages were between 0.2 and 0.4Mbps, up from 0.1 to 0.2Mbps on the legacy network. That's a far cry from the 9.8Mbps theoretical, but it's still about double what users get from the old system.

This isn't like going from an analog modem to DSL

The bottom line: this isn't like going from an analog modem to DSL, or from DSL to fiber. Gogo says that it'll continue to throttle users who get aggressive with video and streaming in exactly the same way — this is still primarily an email tool. Realistically, users will barely notice a difference. In fact, Gogo isn't planning on any special advertising or marking of ATG-4 flights at all (a big contrast to the wireless carrier world, where 4G has been a multi-year, multibillion dollar marketing push). Where this will likely make a difference, though, is on a full flight where ATG-4 is better able to bear the load. Although we never simulated 60, 70, or 80 users on our brief test flight today, that's theoretically ATG-4's strong suit: it's now equipped with two modems working in parallel, connecting to any of eight directional antennas on the aircraft.

Sharp-eyed aviation nerds will be able to pick out ATG-4 aircraft by their larger T-shaped antenna mounted underneath, paired with two fins on either side of the fuselage. But otherwise, this is the same Gogo you've come to know, tolerate, and possibly write off on your month-end expense report. 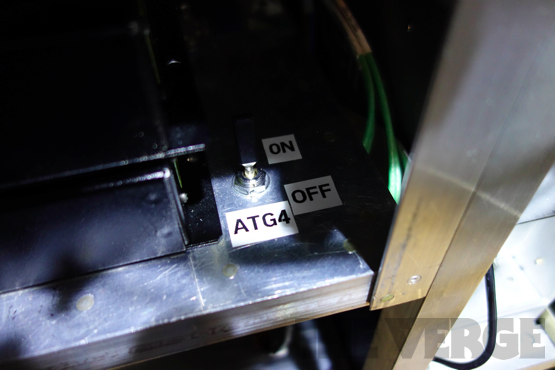 And that's not really a knock on Gogo at all. The fact that you can get an email several miles in the air, much less struggle through a standard definition streaming video, is still nothing short of a technological miracle. Just be aware that if you stumble on an ATG-4-equipped plane on your next trip (Gogo expects some 500 planes to be upgraded by year-end 2013), you shouldn't expect the same level of performance that you're getting from your FiOS line at home.

Leave the Hulu at home

What's next? Gogo is looking at acquiring a small slice of additional spectrum that should allow it to widen the pipes to its aircraft a bit, and it's also working on satellite service — perhaps Gogo's biggest shortcoming at present is that the terrestrial network goes away on international flights, and hooking up to a satellite will fix that (they're also looking at pairing the satellite link with ATG-4 on domestic routes to bump the speeds even higher).

But for now — and for the foreseeable future —leave the Hulu on the ground.