Cloud storage and file-syncing service SugarSync today announced the launch of SugarSync 2.0 in public beta, a big step forward in its battle against Dropbox, SkyDrive, and Google Drive. SugarSync has always been a feature-rich app, but 2.0 is a leap forward in a key area where it’s always been lacking: accessible design. "We got feedback that SugarSync was the most powerful [syncing solution], but not that it was the easiest to use," CEO Laura Yecies told The Verge, so the company focused largely on designing a simple desktop app for the last year and a half. SugarSync 2.0 also adds a powerful search feature on the desktop and web, as well as an expanded set of sharing options — two of its most request features.

With version 2.0, the company succeeded in visually paring down its Windows and Mac desktop app into a narrow window that looks more like an chat client than a desktop app. In the process, did SugarSync lose the multitude of features and settings that make it such a great option for advanced sync-ers? Read on to find out.

SugarSync 2.0 is first and foremost a much-needed conceptual makeover. Instead of having to deal with the useful, albeit decentralized and overly complex File Manager and Sync Folders settings panels, the new version of SugarSync consolidates everything inside one compact window. Four icons adorn the app’s top navigation bar:

Clicking the i button slides open a info pane where you can also selectively include (or exclude) folders within the folder you’re syncing, sync / unsync a folder, and share a folder with friends or coworkers. The Share functionality is a huge step-up from before — a system window instead of a browser page that lets you share links to folders (not just files anymore) with people who haven’t signed up for SugarSync. Another way to share is to drag a file or folder onto a person’s name within the Sharing tab, which is a nice touch.

In stark contrast to the complicated Windows Explorer-esque settings windows in SugarSync 1.x, the new app is breathtakingly modern, and won’t even allow you to maximize it to full-screen. It’s meant to look like a mobile app with four simple icons up top — a new paradigm that will soon span all of SugarSync’s apps and its web app, too. A handsome black, green, gray, and red color palette adorns the new app from head to toe, but SugarSync’s trademark unsightly icons and odd-looking "Folder Info" settings panels are still omnipresent.

Looks have never been SugarSync’s strong suit, but they’re still very much improved from before. In many ways (even for advanced users who loved SugarSync’s complicated file manager), the new app not only looks better but is much easier to use. "We wanted to focus on a content-centric model, where previously we had a device-centric model," Director of Product management Vibhor Chhabra says. "Now you can see all your content under the Cloud tab." This means that SugarSync 2.0 focuses less on folder structure and more on simply helping you find files and folders.

Aside from a minimalist and centralized new design, the app’s best new feature is SugarSync Drive — a virtual drive mounted on your computer that lets you access every file stored in SugarSync. Assuming you have a relatively speedy internet connection, Drive lets you browse anything you’ve stored in the cloud right from Finder or Windows Explorer, as if it were located right there on your computer. During my tests of SugarSync Drive, it has come in handy since there isn't enough space on my MacBook Air to store my entire SugarSync account on it. Whenever I need a few songs or photos from the cloud, Drive lets me drag it to my desktop instead of asking me to download each individual file from a website like Dropbox does. Sure, you can selectively sync folders to your desktop with Dropbox, but not individual files you need on the fly.

Drive recalls iDisk, Apple’s convenient virtual drive that relieved users of having to deal with clumsy cloud storage web apps — and SugarSync Drive is meant to do the same thing. "When Apple killed iDisk, we got a ton of customers," Yecies said. Like in the iDisk of yore, you can drag and drop files directly to and from the drive, share things with a right-click, and move things around. When you search for files in SugarSync’s new app, double clicking them brings you into Drive (or to that folder, if it’s synced to your computer), where you can open and edit files pretty seamlessly. If you accidentally unmount / eject Drive, re-launching the SugarSync app will bring it back to life. 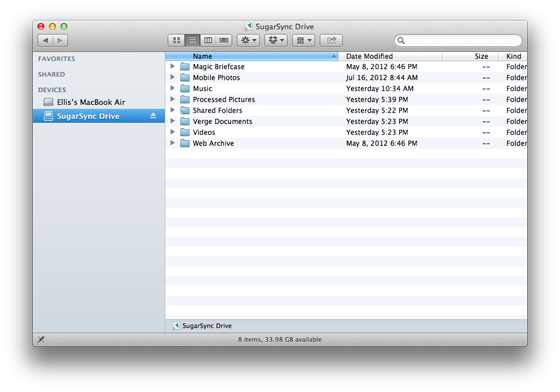 SugarSync Drive is a killer feature that makes browsing any file you’ve uploaded to SugarSync super simple, and exposes a key vulnerability in Dropbox’s game plan — namely its dependency on its web app to access certain key features. "On the desktop, a goal was to initiate and complete actions directly inside the app," VP of Product Drew Garcia said. "We didn’t want to punch you out to a web browser." SugarSync 2.0 never forces you to use its web app, while Dropbox users will still need Dropbox.com to share files or find the files they’ve stored online but not synced to their computers.

Faster, but still behind

Along with a much-needed visual and conceptual update, SugarSync’s back end has been given an overhaul to make uploads faster and more responsive. "We’ve done a lot of work behind the scenes on the client and server side to make the app use less resources and be more efficient," Garcia said. "It’s a lot of architecture behind the scenes." SugarSync does feel faster and uses up fewer resources, but still does not appear as lightning fast or as feather-light as Dropbox. A 2 GB folder upload to SugarSync took more than thirty minutes (even with upload speed turned to "high"), while the same upload to Dropbox took less than fifteen minutes. There are many factors at play here, obviously, but Dropbox remains much faster at syncing files.

For some time, SugarSync has offered a much larger feature set than its competitors, but it’s always been missing integration with the apps we love. Cool new services like IFTTT.com seem to choose Dropbox first — and even some time after launch, the site still doesn’t include SugarSync compatibility. Also, most mobile text editing and photo-sharing apps offers the option to sync Dropbox files, but SugarSync is almost always absent. Missing app integrations has continually prevented SugarSync from becoming as useful as its chief competitor, Dropbox — the de facto plug-in for many apps that utilize cloud storage. There are some apps that take advantage of SugarSync, like CamiApp or CloudAround, but most of our favorites (like Byword) are missing in action.

"This has absolutely been identified as the last remaining place where Dropbox has an advantage."

Fortunately the company gets it, and is making a big push to get integrated in as many popular apps as possible. "This has absolutely been identified as the last remaining place where Dropbox has an advantage," Director of Communications Robb Henshaw said. "We hired a developer relations person a month ago, and we’re adding a lot [of apps] very quickly." If and when SugarSync gets integrated more closely with apps on various platforms, Henshaw points out that the company’s mobile app already includes a text editing function, and added that a Windows 8 app has just recently launched. 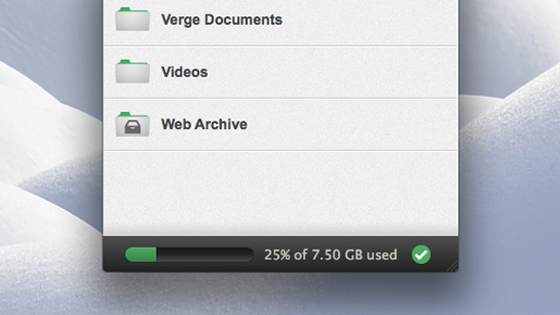 While app integration and better-looking icons and menus are clearly still obstacles for SugarSync, the company’s meticulously structured and feature-rich 2.0 app puts it in a much better position to attract new users, as well as new developers. SugarSync’s desktop app is finally simple enough for the average person to understand, but to beat Dropbox, it’ll have to have all three pieces of the puzzle: simple and accessible design, a thorough understanding of syncing files, and integration with its users’ favorite apps.