Or, why I'm never buying a Wi-Fi tablet again

I've owned too many tablets over the last three years, and not a single one has had cellular connectivity. I've always bought the Wi-Fi model because I don't want to pay for extra data, I don't want to be beholden to yet another data plan or contract, and don't I already have this great phone in my pocket that can do all the things my tablet does? And that will tether to my tablet if I really need it?

So when I started playing with the Nexus 7 with mobile data (which I'll call the Nexus 7 Mobile), I wasn't particularly excited. I bought a Nexus 7 when it first came out (I don't think the store was even supposed to sell me one yet), and I like the tablet a lot. The Nexus 7 Mobile changes nothing about the device except to add a SIM card slot, which is unlocked for any GSM network (though Google sells the device with AT&T or T-Mobile SIMs).

But after a few days of using it, I'm furiously looking for ways to unload my Nexus 7 so I can buy the Mobile version. Here's why.

Note: this is our video review of the Nexus 7, from back in June. Just imagine Josh says "it also has an HSPA+ connection" somewhere in the video, and you've got just about everything you need. 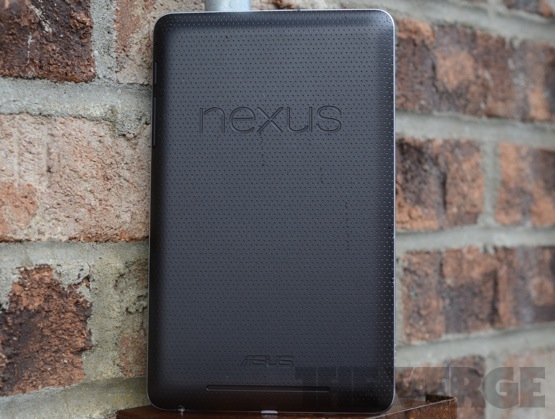 The name "Nexus 7 with mobile data" is a clunky mouthful, but it's perfectly appropriate — this tablet is the Nexus 7 with a little bit of connectivity grafted onto it. This tablet is exactly, utterly the same as the tablet we reviewed in June, save for a tiny cut-out rectangle about a third of the way up the left side. Poke a SIM tool or paper clip into the small hole in the cut-out, and out pops a SIM card tray. Pop in an AT&T or T-Mobile SIM card, and you're off and running. The whole thing is so well camoflauged that you might never notice it's there, even feeling along the side with your fingers.

Like the Nexus 4, there's no LTE support on the Nexus 7 Mobile. That's unfortunately unsurprising, but it's also just unfortunate — the Nexus 7 Mobile's data speeds don't come anywhere close to what I've gotten with the iPad's LTE model. On AT&T's HSPA+ network, I consistently got download speeds between 3-5Mbps and uploads between 1-2Mbps. That's sufficient for web browsing or triaging your email, but YouTube and Hulu had to pause to buffer much more often than on an LTE connection. The device holds its connection well, though, never once losing service unless I was underground or in otherwise impossible-to-reach places — it's at least as capable as a good smartphone in that regard.

For everything you need to know about the Nexus 7 otherwise, be sure and check out our full review of Google's tablet. In short, it's a really solid device. (I bought one myself, and love it.) Its soft-touch back is comfortable to hold, and everything from text to movies look good on the 7-inch, 16:10, 1280 x 800 display. The design is great for reading in portrait, and for turning on its side for watching movies — personally, I prefer the form factor to the iPad mini. It's a little thick and heavy, especially compared to the iPad mini, but it's still really usable in one hand. Its Tegra 3 processor is fast, and Android 4.1 (since upgraded to 4.2) is a reliable and mature operating system.

Every test I ran on the two Nexus 7 models provided similar results. That's mostly not surprising — have I mentioned they're almost entirely identical? — but the one result that impressed me was battery life. On a stable AT&T HSPA+ connection, I got 5 hours, 50 minutes of battery life on the Verge Battery Test, which cycles through a series of websites and high-res images with the screen set to 65 percent brightness. The Wi-Fi model lasted all of ten minutes longer. In practice, it means you'll need to charge the Nexus 7 Mobile only every few days.

The Nexus 7's problems make the jump to the new model as well. There are limited storage options (only up to 32GB), the Play Store doesn't have the depth or breadth of content some of the App Store, and most of all there are still far too few good apps for Android tablets.

Every pro, every con, every feature on the Nexus 7 is here as well. But the Nexus 7 Mobile has that one extra wireless radio, and it kind of changes everything. 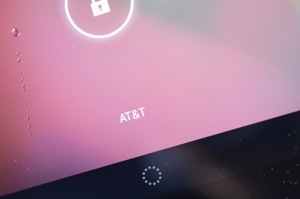 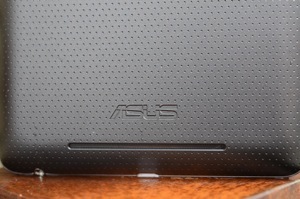 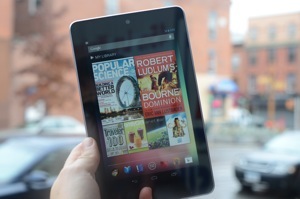 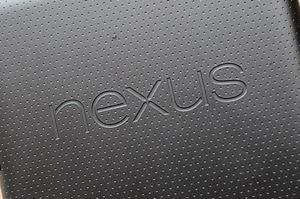 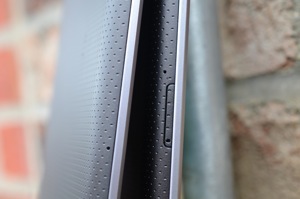 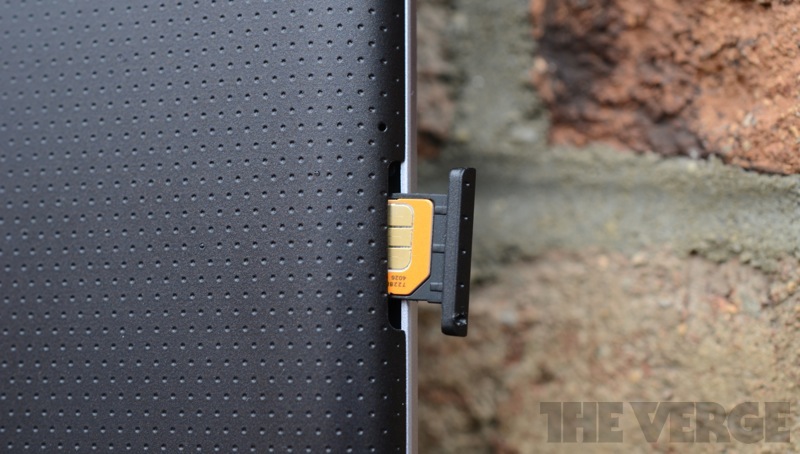 Amazon's Whispersync feature made the first few Kindles feel like magic. You never had to think about "syncing," or loading up on books before you went on your trip. You want a book? Open up the store on your Kindle and buy it, and whether you're in your house or 10,000 miles away, your book comes to your Kindle in exactly the same number of steps. That's what the Nexus 7 Mobile feels like too.

The more I use a cellular-connected tablet, the harder it becomes to live without one. Every morning, I leave my apartment and walk to the subway, and every morning I realize about halfway through the walk that I forgot to update Instapaper with everything I saved from the day before. On the iPad mini, it's hopeless; I just go re-read "The Art of the Steal" for the 4,537th time. But with the Nexus 7 Mobile, I opened Instapaper to check and see if I'd updated, and like magic new articles began to flow in.

I stopped thinking about where I'd be able to find a Wi-Fi hotspot. I no longer needed to make sure I had downloaded the documents I needed before I went to a meeting to discuss them. It all felt a bit like the first time I had a smartphone, or the first computer I used with Wi-Fi; all this preparation I'm used to doing, and all the location-scouting to figure out where I can get connected and get to work, was just gone.

The HSPA+ connection makes the Nexus 7 Mobile feel more like a portable device than any other tablet I've used — including the Nexus 7. Same goes for the iPad with LTE, or Verizon's Samsung Galaxy Tab 7.7. With no connection, your tablet is only as good as the last time you synced it, but these always-on models are great for streaming music, quick Google Maps lookups (the Nexus 7 Mobile would make a killer in-car GPS, if only I had a car), and much more. Like many people, my Wi-Fi-only iPad rarely leaves my apartment, but I've been taking the Nexus 7 Mobile everywhere. 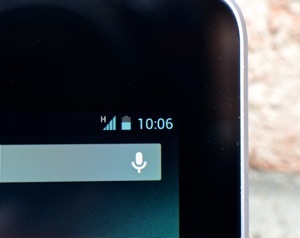 I streamed a couple of episodes of New Girl (great show) while on a train to visit my parents this past weekend, for instance. I've watched plenty of TV on my iPhone before, but I much preferred the experience on the Nexus 7 Mobile. The tablet has a much bigger battery, so I don't have to watch the percentages tick down as it grabs high-def video from the web — I'm more than a little paranoid about my phone's battery, and the Nexus 7 Mobile relieves that worry. Plus, I'd rather use it anyway: the tablet's just a better experience, with a bigger screen that feels much more immersive than the palm-sized display on my phone.

Thanks to a shift in how we pay for our cellphones, a connected tablet is much more feasible than it used to be. With AT&T's Mobile Share plan, you buy a single bucket of data that you can use any device to draw from, and adding a tablet to the mix is only $10 per month. You don't need a new plan, or a new contract, and you can add or remove the Nexus 7 from your stable of devices at will.

Of course, Google's not the only company that had this idea. The LTE-capable iPad and iPad mini are available on a number of carriers, but the cheapest model is the $459 entry-level iPad mini — a $160 price advantage is a big one. The Nexus 7 Mobile is by far the cheapest way to get a decent tablet with that magical always-on connection. The iPad and iPad mini are still better tablets overall, thanks largely to their vastly superior app stores and ecosystems, but Google's first tablet effort remains an impressive one. Along with the Nexus 4 and Nexus 10, it might also be the long-awaited impetus for developers — now that there's great Android hardware, there's good reason to build great Android software, but only time will tell if developers buy in. Until they do, you're still taking a risk buying the Nexus 7 or any other Android tablet — though having constant web access makes Chrome feel like a much more viable app platform.

Unless price is the only consideration, you should always buy a data-enabled tablet

All of this is to say that if you're thinking about buying a tablet, you're still probably best off with an iPad. But if you're sold on a Nexus 7, I can't think of a good reason not to buy it with mobile data. I recommend buying the cellular version of any tablet, actually, but it's an even easier sell on this device. The deciding factor with other tablets is price: you pay a $130 premium on the iPad for LTE connectivity, and the Galaxy Tab 7.7 is only available for $399.99 from Verizon. At $299, the Nexus 7 costs only $50 more for the HSPA+ model — it's $100 more than the entry-level model, but you also get 32GB of storage instead of 16.

Even if you don't plan on using the data plan, spend the extra $50 — I bet you'll end up using it. I'm already looking for ways to hack a SIM card slot into my own Nexus 7.