Compare the Droid DNA to its high-end Android competition

Share All sharing options for: Compare the Droid DNA to its high-end Android competition

Lately, it has seemed that the "best Android phone" has changed from week to week. The Galaxy S III, HTC One X+, Galaxy Note II, and Google's own Nexus 4 represent the current cream of the crop — but HTC shook that all up today with the announcement of the long-rumored Droid DNA. While Verizon's latest flagship phone is probably the new undisputed specs king, how does the total package stack up compared with the rest of the best-in-class Android phones out there? Read on to find out.

As with any modern smartphone, everything begins with the display... and here, HTC's Droid DNA is currently unmatched. While the Nexus 4 has an excellent 1280 x 768, 4.7-inch display, the Droid DNA ups the ante with its 1080p, 5-inch screen. That works out to a 440ppi display, pixel density completely unheard of in the current smartphone landscape. We'll need to do more thorough testing, but at a first glance, the Droid DNA's display appears to have no rival.

At first glance, the Droid DNA's display appears to have no rival

While its screen may be excellent, the 5-inch panel requires the Droid DNA to be larger than the already-huge phones on the market — the only bigger phones you can find out there are the Galaxy Note and its successor, the Galaxy Note II. That said, the size and weight of the Droid DNA is right in line with its competition — it's surprisingly thin at .38 inches, just a tiny bit thicker than the One X+, Nexus 4, and Galaxy S III, and tapered to fit well in the hand. While one-handed operation will be trickier than with other competing phones, it's a comfortable fit in two hands. If you want a high-end Android device that isn't quite so large, the Nexus 4 might better fit the bill — its dimensions are the most compact of the devices we're comparing here. 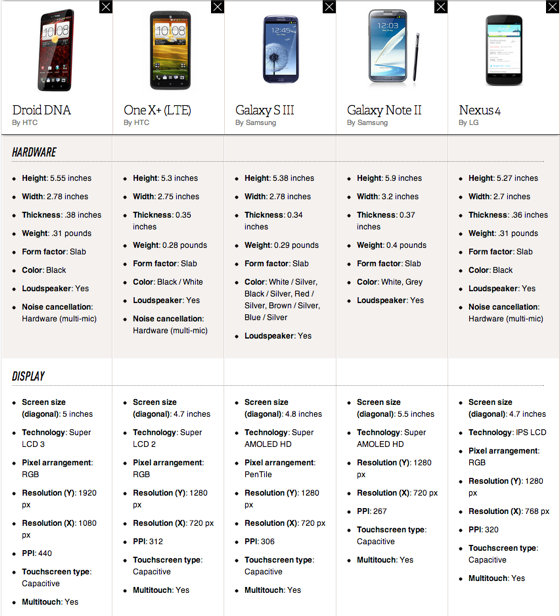 Much of your decision will come down to personal preference

The Nexus 4 also provides a good comparison in terms of internal hardware — both phones feature a quad-core, 1.5GHz Snapdragon S4 Pro processor with 2GB of RAM. However, the One X+ and Galaxy Note II are certainly competitive, as well — the One X+ brings Nvidia's quad-core Tegra 3 processor clocked at 1.7GHz, while the Note II has a Samsung-made, quad-core, Exynos processor at 1.6GHz. While it remains to be seen exactly how the Droid DNA will hold up while pushing around an extreme amount of pixels, all of these phones should be speedy and efficient performers. However, if internal storage is what you're after, the Droid DNA falls short with only 16GB of space. You'll want to check out the One X+, the Galaxy S III, or the Note II to maximize your internal storage.

The last few considerations come down to personal preference. All of the phones include 8-megapixel cameras, so do you prefer the stock Android camera experience, or do you enjoy HTC or Samsung's software? Is Sense or Touchwiz a more palatable option, or do you require stock Jelly Bean? Is LTE an absolute requirement, or just a nice-to-have? Does the minimalism of wireless charging excite you? We can't answer these questions for you, but any way you slice it, there's a wide variety of high-end Android phones available this holiday season. Your best bet might be to pick your carrier of choice and then choose from there — but if Verizon's your preferred option, you'll get a lot of bang for your $199 (on-contract), provided you can handle a 5-inch phone.

Compare this: Droid DNA vs. One X+ vs. Galaxy S III vs. Galaxy Note II vs. Nexus 4