Living with Google TV: jack of all trades, master of none

Share All sharing options for: Living with Google TV: jack of all trades, master of none

I've spent nearly a month using Google TV as the primary way of getting entertainment to the television in my living room. Not once during that time did the experience delight me, it often managed to get the job done, and all too often it frustrated me and stymied my efforts to just watch something. Eric Schmidt famously predicted that "By the summer of 2012, the majority of the televisions you see in stores will have Google TV embedded." Luckily for anybody who has ever held a remote control, he was wrong.

I need to express one important caveat to this very harsh assessment at the outset: I'm a "cord cutter," and so I am not speaking to one of Google TV's core features: the ability to easily search cable TV content when connected to a DVR or cable box. Even so, that situation is also fairly grim. Beyond the relatively small hurdle of owning a cable box that puts out HDMI content, support for directly controlling or searching DVR content only works with a few of Dish Network’s boxes.

Unlike other ecosystems, Google TV is not consistent across hardware when it comes to specs, but more importantly each manufacturer takes a different attitude towards integrating with your existing components. I used the Sony NSZ-GS7 set-top box to access Google TV, and the interface is a confusing mess of mixed metaphors that makes the average smart TV on Best Buy's shelves look like a paragon of user-centric design and thoughtfulness.There are some televisions with Google TV built-in, but there are also separate set-top boxes that attempt to control other components using IR blasters. Google TV is therefore setting itself up as an ambitious central hub for all of your other living room equipment — with mixed results. 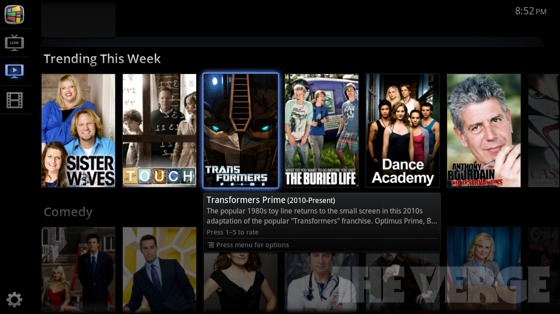 Searching works and works well, but browsing is another matter

In terms of available content, now that Google offers TV and movies for rent or purchase from Google Play, finding video to watch has become a bit simpler. In our list of top 25 movies, five were simply unavailable — but they also weren't available on other living room ecosystems like Apple TV or Xbox. Searching works and works well, but browsing is another matter: there are simply too many places to do it with too many different UIs and feature sets. You can often find what you’re looking for, but as you do you’ll find yourself using one of several different interfaces to get your video. If you search for, say, "Psych," you’ll get results from Amazon, Netflix, and Google Play — but Amazon dumps you in a glorified web browser, while Netflix and Google Play each have their own disparate app interfaces.

The same situation applies to downloadable TV content — Google has worked hard to secure as many content partnerships as it can so you can download TV shows. For example, unlike Apple, there’s an HBO Go app for HBO subscribers. The biggest gap, however, is Hulu Plus, which simply isn’t available on Google TV either as an app or through the built-in Chrome browser, which is blocked. That's a huge problem for cord-cutters, and I found accessing television content for free, and even with a subscription, was incredibly difficult. Although Android hackers have found ways around this limitation, it’s not easy nor is it the sort of thing most people will want to bother with — especially in their living room.

On the bright side, Google TV will work with cable and satellite boxes, presuming that they have an HDMI-out on them. Google TV should be able to search through the live TV content on most cable providers, and Dish network subscribers have additional integration — with direct search and control of DVR content. If you love live sports, this is obviously your best option.

While you should be able to find much of the content you will want on Google TV, simple access and availability is only a small part of the Google TV story. Content is table-stakes in a living room ecosystem, the real challenge comes in how you get to it. 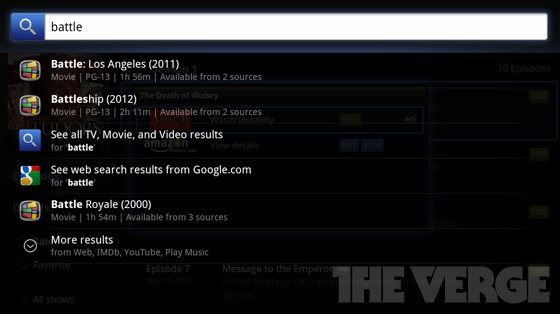 The core concept behind Google TV is praiseworthy: from anywhere, you can hit a search button to automatically search for content across multiple sources: Google Play, Netflix, Amazon, HBO Go, (some) DVR content, television, and more. As nice as the cross-platform video search is, it's not entirely without problems. They begin with the results, which show you some details on the video you've found, but no ratings or previews until you navigate to the service that’s providing the content.

Each service has its own, disparate interface that sucks in its own, special way

Once you find the content you're looking for, you need to drill into the particular service you'd like to watch the video from. Once you do, you're essentially spinning a roulette wheel: each service has its own, disparate interface that sucks in its own, special way. Amazon essentially offers a web page via a Google Chrome interface, while Google Play is almost literally the same interface you get on a tiny phone screen blown up to TV dimensions.

Besides cable TV integration, Google TV's biggest differentiator is that it has a full Google Chrome web browser built in, including Flash support. While many of the most important sites, like Hulu, block Google TV, there there are a few cases where being able to simply pull up a web browser can be the difference in getting to see your favorite shows. I'm a huge fan of PBS' Frontline documentary series, which unfortunately has a very spotty track record when it comes to making itself available on streaming services. With Google TV, I was able to access the content on the web directly. 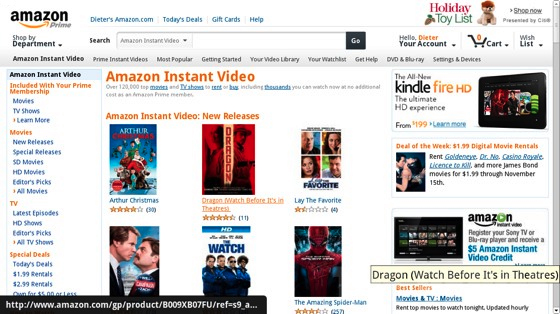 However, the Google Chrome and Flash integration cuts both ways. Amazon, in particular, appears to have used it as an excuse to punt on its Google TV app, instead offering an "app" that consists of its web page and content indexed for Google TV's universal search. As on the desktop, Amazon streams its video content to Google TV via Flash, and it's horrendous. Even with a 50Mbps download speed, I faced constant buffering and terrible artifacting. In one case, Amazon, unasked, sent me a full refund for a video rental because the company could tell how bad the quality was.

The Flash performance is just as terrible everywhere else on the web. Some of that can be chalked up to sub-par hardware, but the bottom line is that Flash is a processor-intensive way of delivering video and it's unlikely that any Google TV hardware will be up to the task — especially for HD content. Given that Adobe is itself moving away from Flash at a rapid pace, the fact that it's still a central content delivery tool for Google is ridiculous. 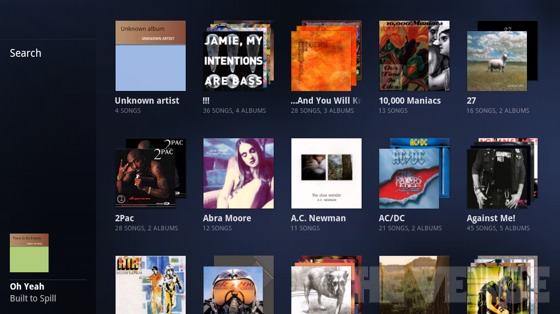 Google recently added proper Google Play music integration to all Google TV devices, but again the experience is not great. The universal search doesn't seem to pick up content from Google Play music (though it does find music you've synced to Google's cloud music service). To find music, you need to use the five-way controller or mouse pointer to slowly make your way to the in-app search field. In fact, I find the much-maligned and now-discontinued experience on the Nexus Q — where you choose your music on an Android device and it streams directly to the Nexus Q — to be a better experience.

If you’re not using Google’s Play ecosystem for your music, you’re in for a disappointing experience. There are precious few music apps for Google TV that you’ll want to bother with — the list essentially starts with Pandora and ends with iHeartRadio and TuneIn Radio. Spotify, Rdio, Mog, and many other big name services are all absent. Unlike Apple TV’s AirPlay, Google doesn’t have a good way to stream content of any kind from an Android device to Google TV. The closest thing to it came literally today, with a minor update that allows users to push YouTube videos from the app on an Android devices to their Google TV.

Google TV is simply not a gaming platform, full stop

Google TV theoretically should have an advantage over the Xbox 360 or Apple TV in that it's a full app platform based on Android 3.2 Honeycomb. That theory fails in practice, however, as the selection is poor at best and the performance of every app I've tried paled in comparison to other platforms. Google TV is simply not a gaming platform, full stop. 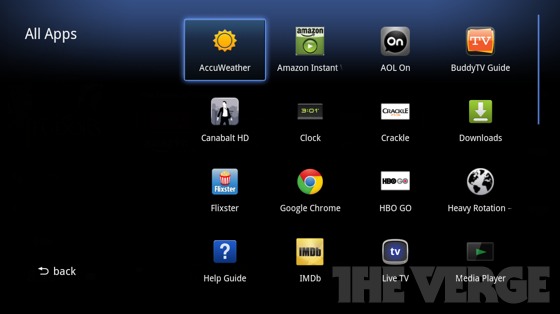 A big issue with Google TV is cost. Although Vizio has finally given the platform a reasonable price point of $99 with the Co-Star, most Google TV devices range from $125 and $299, expensive relative to the features they offer. It’s difficult to justify even the Co-Star when the Apple TV costs the same and offers a more coherent experience. There are several televisions on sale that offer Google TV as a built-in option — but it’s not the sort of thing I’d suggest consumers base their TV purchasing decision on.

Google is trying to solve an incredibly difficult problem: not only is it trying to interface with essentially any living room component, it's also trying to act as a content delivery system, a web TV, an app platform, and more. Those multiple goals could work if each was executed well, but in fact the only one that even comes close at is the cable / satellite TV integration. There have been leaks of a "v3" of Google TV that will offer voice search and an improved interface, but I’m not optimistic that it will solve any of the myriad other problems on the platform.

At the end of the day, Google TV is a jack of all trades, but it fails to be competent at any of them, let alone master one.