The beauty of Wii U: Nintendo knows how to go all in on a gimmick

The beauty of Wii U: Nintendo knows how to go all in on a gimmick

Nintendo is very good at gimmicks. Virtual Boy and those stupid miniature GameCube discs aside, Nintendo’s track record on “it will never work” devices is astounding. It started with the DS, which even Nintendo was skeptical about — holding back its vaunted GameBoy name just in case the dual screen gimmick didn’t pan out. And then the Wii, with its absurd controller configurations — a “Wiimote,” a “nunchuck,” a “Wii Fit,” a “MotionPlus” add-on. Last time I checked, even the 3DS was doing pretty well — not well enough to save Nintendo singlehandedly, but well enough for a gaming only device released in the smartphone gaming era. (Ed. note: Nintendo recently released sales numbers, and the 3DS is up 64.8 percent to 5.06M in the first half of 2012)

Even if you’d like to say the Wii never delivered on its promise, never had “the games,” you have to admit that it changed the industry. Sony built Move, and Microsoft built Kinect, as a direct response to the Wii’s popularity. Now that our iPad games look as good as our Xbox 360 games, with cameras and gyroscopes to boot, home consoles are going to have to get more immersive to hold onto users, not less.

And so now here comes the Wii U, with a gimmick of its own. A huge tablet with a resistive touchscreen. It will never work!

A huge tablet with a resistive touchscreen. It will never work!

Microsoft and Sony have been quick to assure us that they’re doing the tablet-to-work-with-your-console thing right. They’re super serious and smart, and so they want to work with “the tablet you already have.” Sony wants to play nice with your Vita, or maybe some Android stuff. Microsoft is now pushing out SmartGlass, which will work with Windows, Android, and iOS. Why would you want Nintendo’s cheap toy of a tablet when you can use your iPad with your Xbox?

A year after Nintendo announced the Wii, Sony showed off the motion-control stuff the PS3 would offer. It was a lame-o accelerometer. Not only was it terrible motion control, but it also ejected the controller’s rumble capabilities — Sony had given up its famous “DualShock” brand to do a silly “me too” stunt.

A year after Nintendo announced the Wii U, Microsoft showed off SmartGlass. It’s a great idea. But it won’t be a great product for years. It’s dependent on so many things: content providers making interactive TV shows and movies (for a single platform), game developers spending extra time and money building interfaces and interactivity for tablets and phones (but with no guarantee consumers will use them, so they need to be redundant with regular game functionality), and Microsoft will have to support a trio of platforms with a high-performance networked app — they’ll need to out-Airplay Airplay on three ecosystems at once, with hundreds of different devices to reconcile. 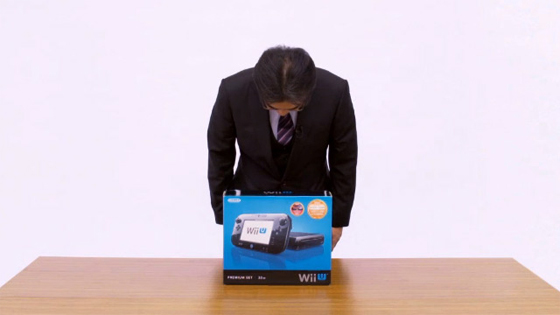 See, the thing is, Nintendo knows the rule about gimmicks: sell the whole gimmick. Nintendo’s platforms rely almost entirely on the strength of first party games, and Nintendo makes sure those games use its gimmicks well. Nintendo is often criticized for the Wii’s life cycle for the typical user: they’d buy a Wii, play Wii Sports, then put it away after a couple months. Then the Wii Fit came out, they’d buy that, play that, then put it away after a couple months. Rinse and repeat with MotionPlus.

If you want something done right, you have to do it yourself

The third party standouts were rare. But that’s the whole thing with gimmicks: if you want something done right, you have to do it yourself.

At E3 this year I played some Wii U games, and I really enjoyed my time with them. The asymmetric gameplay is a fun twist on game types that I’ve been playing since childhood — the Wii U is the console that freeze tag, hide-and-seek, and Bomberman have been waiting for. I loved that ZombiU game, which makes inventory management a thrilling aspect of gameplay, instead of a chore. The Wii Fit games for Wii U are amazingly intuitive and fresh.

All of these things are completely possible with any tablet and any console. In fact, I think Apple is the best positioned to win this multi-device-gaming battle — an iPad mini and an Apple TV would make the Wii U look like it’s been built for babies.

Because, really, the Wii U is for babies. It’s blunt and unbreakable, and the games are dumb and simple, and everything is proprietary. Sales will fall off a Wii-style cliff once Microsoft, Sony, or Apple cobbles together a mature version of what Nintendo is attempting.

But so far they haven’t.

I was planning on waiting for a Wii U version of Mario Kart before buying the new console. And I haven’t pre-ordered, so I might have a long wait anyway. But I’ve been thinking a bit about how much unapologetic fun I had at Nintendo’s E3 booth this year. I did all the Wii Fit games twice — even bobsledding, which doesn’t actually involve holding a Wii U. Yes, I’ll get bored of the gimmicks in a month or three. There are only so many times you can jump on a fake trampoline. But it’s clear that Nintendo can still deliver fresh experiences, and can still compel suckers-for-gimmicks like myself to open our wallets.

Nintendo might fail in the market because of its refusal — or inability — to become a true consumer electronics company. Powerful phones and sleek tablets are breathing down its neck, and meanwhile it’s building a textbook-sized dual analog controller with a crappy screen, which you can use to flick fake ninja stars at your TV. Nintendo’s problem is that it makes video games, not gadgets. But until the gadget companies make a tablet-to-TV experience that feels like a video game, not a gadget, I’ll stick to Nintendo for all my fake ninja star flicking experiences, thanks.