Living with Apple TV: you get what you pay for

Living with Apple TV: you get what you pay for

A slick media store gets a big boost from AirPlay

I’ve always held a grudge against Apple devices, yet somehow I’ve come to own nothing else. My first smartphone was a Motorola Droid. I had it for two years. In that time, I probably spent a total of $10 on apps. I spent more than that on my first day with an iPhone.

Read next: The Apple TV review.

My first connected TV device was an original Boxee Box. After that I added an Xbox 360. My latest purchase was an Apple TV, and I managed to spend more on films and TV in the first few months than I had in my two years with the Boxee or Xbox. Clearly, Apple knows how to make a slick, seamless store that anyone can learn to navigate easily, and as someone who would rather be working a little harder and getting the goods for free, I kind of hate them for that.

Boxee, for example, offered lots of great options for free content, ranging from video from Vice magazine or new TED talks, all served up as well-designed apps. Apple TV requires I load up the Podcast app, search for TED, click my way through lots of generic results, choose from a dozen different TED modules, and finally select my episode, most of which are presented largely without any description.

Apple’s priority is to be the best media merchant, not the most flexible or interesting internet-connected set top box. Spending a week with only the Apple TV reminded me that it’s still largely lacking some crucial elements — gaming, live local sports and news, and a variety of free entertainment apps. But at $99, I have to admit, Apple TV delivers a strong overall package at an affordable price with a great interface and just a few rough patches.

Apple TV’s homescreen offers an ever-changing buffet of first run films and premium cable series. Buying them with a few clicks and not thinking about the bill gave my living room an illusion of luxury it had been sorely lacking. On top of what’s available on the iTunes store you can find Netflix, Hulu Plus, and a very nice Youtube app. Apple TV is missing content providers you’ll find on PlayStation or Xbox like Amazon Instant Video, Vudu, and CinemaNow, making it harder to comparison shop.

The bill, when it did come, was a rude reminder of what happens when content can be purchased a la carte. Individual episodes ranged from $1.99 to $2.99 and a season pass can run you anywhere between $19.99 and $42.99. With two films, four individual episodes, and three full seasons combined, my wife and I once managed to spend upwards of $80 in a single week, more than what a cable subscription would have cost us for a full month.

While the experience was largely seamless, Apple TV was far from perfect: my wife ordered the latest season of Project Runway but found that episodes which were marked as available, even after purchase, sometimes simply refused to play. It appeared in her queue with that friendly blue dot to indicate it was ready to watch. But no matter how many times she clicked it, screamed at the television, turned the Apple TV on and off, and fiddled around in iTunes (where the episode played fine), the message was always the same: this content is unavailable. "Technology never just works that way it’s supposed to," she moaned. 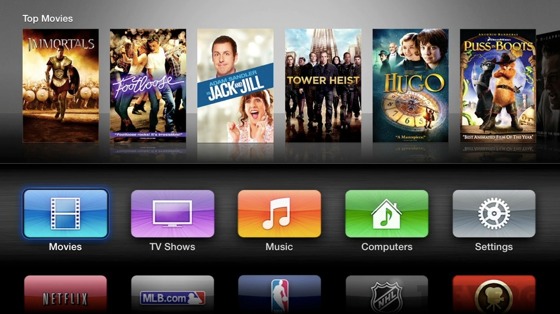 I’d previously been using a original Boxee Box and Xbox 360 with Kinect for my media and gaming; both made it possible to purchase movies and TV shows, but neither made it as effortless as Apple TV, and neither pushed me a selection of appetizing new releases on startup.

The Apple TV remote is a simple, effective affair. You can click up-down-left-right and press one of two buttons, and it was never confusing or frustrating to use. This compares to the Xbox controller, which took my wife a while to master, and the Boxee Box remote, which we both were constantly holding upside down by mistake.

This simplicity made navigating around Apple TV easy, but it has drawbacks as well, especially when it came to search. It was far faster to scroll through the alphabet with the Xbox controller or type out my query with the keyboard on the Boxee remote. Apple improves this somewhat by relying on auto-fill, which could typically guess the film or TV show I wanted after just the first four or five letter. Another nice workaround is the free Remote app for iPhone or iPad, which lets you use AirPlay to do your typing and navigation. 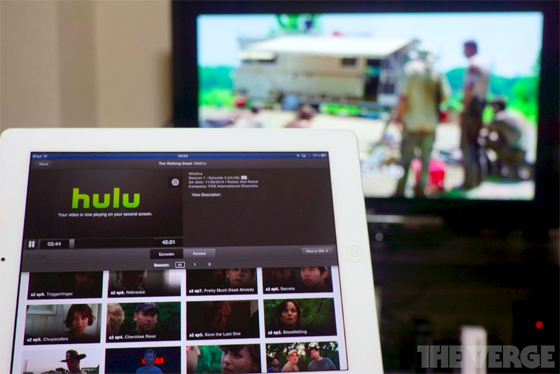 One of the features I was most excited about on Apple TV was AirPlay, which lets you stream the image — from an iOS device or computer running Mountain Lion — right to your big screen. Its basic function is to simply mirror what’s on your small screen, but there are also "second screen" apps, like Zeebox or Hulu, where you can start a video stream via AirPlay, and control additional content on your mobile device related to what you’re watching. With AirPlay, I imagined, I could solve a lot of problems around live events like UFC fights and the presidential election by just using AirPlay to get streaming video from the web on my TV. Visions of VJing killer living-room-dance-parties played in my head.

Sadly, for me, AirPlay was a buggy mess. I tested it with HuffPo Live, CNN.com, YouTube, and many other others. When I launched a video, and especially if I went full screen, the image would stutter and degrade and the audio would fall out of sync. Here I’d blame my router and slow internet connection: to save money, I share my internet with with a downstairs neighbor, and my Wi-Fi router is a floor away. Several colleagues with better speeds and closer routers seem to use and enjoy AirPlay without these problems.

While Apple TV doesn’t have an app for HBO Go, you can log in on the web and mirror what’s on your computer screen to your TV — hardly a perfect workaround. The HBO Go app on my iPhone blocks the AirPlay video stream, turning Boardwalk Empire into an old timey radio play.

That said, I had much better luck with iOS. Kicking a YouTube video from my phone to Apple TV worked well, and the same held true with music. And as I mentioned before, AirPlay lets you use your phone as a remote for keyboard heavy input. Of course, the downside to turning your phone into a remote and a playlist machine is that I can’t AirPlay Spotify and take a call at the same time.

Simply put, you’re not going to get most live local sports through Apple, but I was pleasantly surprised by the major league apps available. The NBA Game Time offering, which comes on Apple TV’s home screen, offers video highlights from last night’s games, a decent fix for cord cutters without ESPN. You can sign up to stream live games for $189.99 a season , but most likely your local team will be blacked out. Hockey fans can find a pretty much identical app for their needs called NHL GameCenter ($169.99 a season.) Baseball can use MLB.TV, which offers live streaming of regular season game, plus pre-season extras, for $129.99, but is also subject to a lot of annoying blackouts that make it tough to watch you local clubs live or catch the post-season. My favorite sport, the mixed martial arts league the UFC, sadly does not have an Apple TV app, something competitors like Xbox and Roku now offer. America's most popular league, the NFL, is also not available. 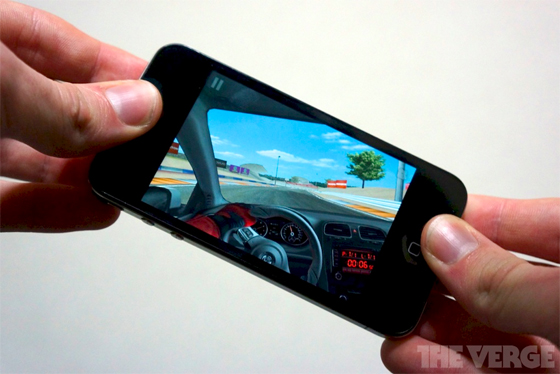 The current gaming experience over AirPlay was largely a novelty

I could find only a few games which were built to work with Apple TV. Real Racing 2 HD played just fine on my iPad 1, but that device is too old to do mirroring via AirPlay. My iPhone 4S ran Real Racing 2 just fine via AirPlay. The controls were responsive, although I found the graphics hiccupped a lot. I can’t say if this is the universal experience with AirPlay gaming, or related to network problems. MetalStorm, a fun jet fighter game I downloaded for my iPhone suffered from the same laggy graphics and gameplay. While there is a lot of potential to do interesting gaming here, the current gaming experience over AirPlay was largely a novelty, and I didn’t find myself going back to it after a few tries.

The roughly two thousand songs I backed up to iCloud were easy to find and played without any problems. New albums that I purchased through iTunes showed up right away. The selection on iTunes was phenomenal, it had every single album from both the mainstream Billboard and more indie Pitchfork lists we designed to test web TV ecosystems. And I found that some of the Genius mixes Apple cooked up from my music collection were halfway decent. Apple TV doesn’t offer up apps for Pandora or subscription services like Spotify, Rdio, or MOG, but Spotify and Pandora worked very well over AirPlay.

The selection on iTunes was phenomenal

I do have one small bone to pick with Apple here. You may say this is my own fault, in which case, consider this fair warning. If, at some point in your past, you thought it would be fun to put racy personal pictures on a few tracks as album art, forgot about them, and then uploaded those songs to iCloud, there is a good chance they will suddenly appear on your television as a screen saver at the most awkward moment imaginable. 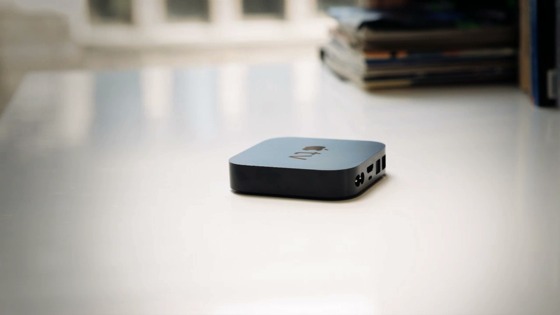 Just because I broke the bank on old episodes of Game of Thrones doesn’t mean everyone will. I could have picked out five new shows to watch at a time and paid for the full seasons, giving myself an hour of premium cable each night. If the average series has about twelve episodes and costs around $29.99, you could get one new episode Monday through Friday and pay just $12.50 a week, or a little less than half of the average cable bill per month. In other words, with some self control, you can get a healthy serving of premium cable a la carte and pay a lot less than you would for a 500 channel package. And, of course, there’s always Netflix and Hulu Plus.

The drawbacks of Apple are the lack of gaming, live TV and a wide assortment of native web TV apps. The upside are the price, ease of use, and AirPlay, which provides a powerful workaround to a lot of the Apple TV’s limitations. I was glad to end my week in Apple isolation, but if it came down to just one device, Apple TV would be the best choice for my wife and me. It more than meets our basic web TV needs, is easy to interact with, and delivers the best selection of film and television we both enjoy.