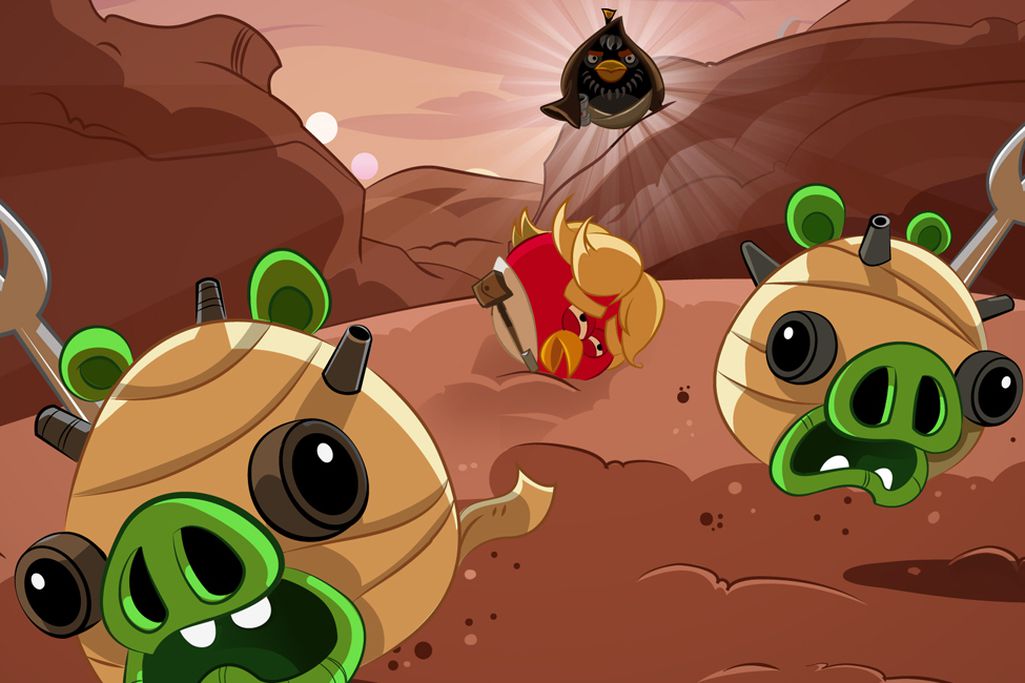 Like many of my compatriots at The Verge, I felt a certain amount of trepidation towards Angry Birds Star Wars. I’m far from a dedicated fan of either franchise, but without context, the images of Han Solo and Luke Skywalker as humanoid birds seemed somewhere between tacky and downright creepy. It wouldn’t be the first time that Rovio had created a movie tie-in – that would be 2011’s fairly successful Angry Birds Rio – but the Star Wars franchise isn’t above misguided cash-grabs, and its elements range from critically acclaimed to universally loathed.

Thankfully, Angry Birds Star Wars is more the former than the latter, in no small part because its Force- and starfighter-based gameplay is genuinely addictive. But it’s also due to the game’s lighthearted reverence for its subject matter. Each section, for example, starts with a splash screen in which characters like a hulking Chewbacca-bird or a pig version of Darth Vader act out A New Hope. The pig-eared Death Star is suitably oppressive and bird-Han (obviously) shoots first, but you’re still watching cartoon animals pantomime a beloved series. And their creator, Jarrod Gecek, knows it. To him, Angry Birds Star Wars “takes itself seriously, but it doesn’t take itself seriously at all, you know?” 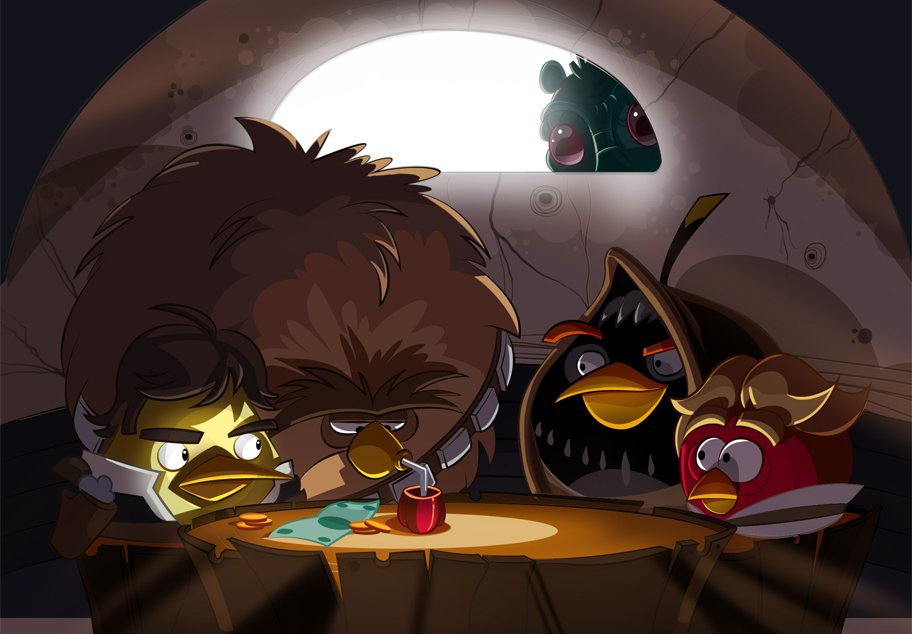 Gecek’s initial reaction to the project “was just pure excitement, man.” A freelance artist, he’s spent years in the games industry but says this is his biggest gig so far. After hearing about a job at Rovio through friends and family, he applied and was offered work on Angry Birds Star Wars as his first project. “You grow up watching Star Wars. Everybody loves Star Wars,” he says. While he certainly worried about being able to do justice to the series, he didn’t share many fans’ fears. “Once they told me, it just felt like it would be the next step. It just makes sense to go from [Angry Birds] Space to Star Wars.”

Rovio art director Toni Kysenius admits that the creators initially considered Star Wars-inspired visuals for Angry Birds Space. But “we consciously stayed away from those ideas as we hoped that one day we could officially work with the franchise,” he told The Verge via email. “When we got the news that the collaboration [would] actually happen we were super excited… We learned that people at LucasArts were equally excited about working with us.” 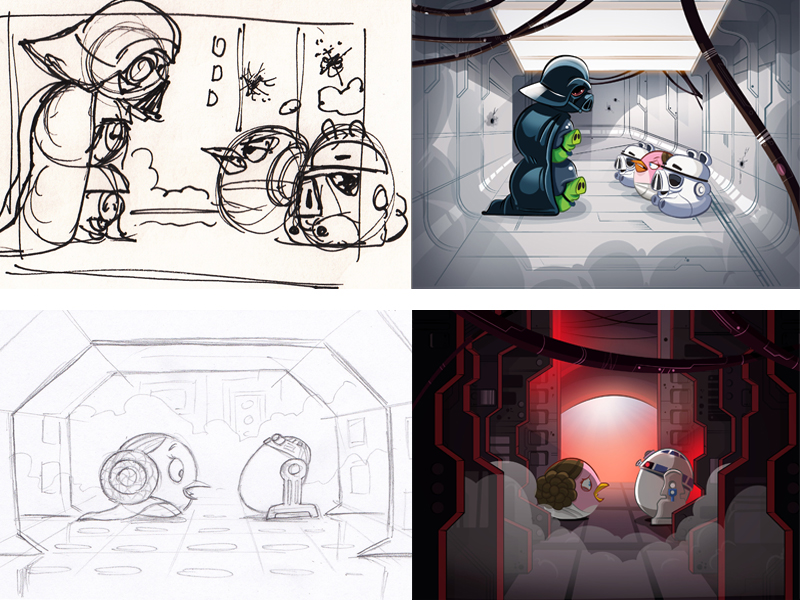 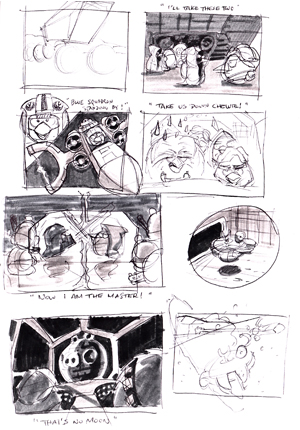 By the time Gecek came on the project, the character designs were already set. His job was to turn the movie’s plot points into scenes that were compelling but retained almost all the features of the game’s vector graphics. “[Kysenius] was like, ‘No, we have to stay on scale and on model. It has to be the angry birds,’” Gecek says. At first, “I drew it the way I instinctively would draw it, and sent it off and he was like, ‘That’s not gonna fly.’” Unintentional puns aside, that meant changing details as minute as the length of pig-Vader’s helmet mouthpiece or the placement of his nostrils, which had been stylized in a way that didn’t match the in-game graphics.

Reconciling the comics and the comparatively tiny game graphics proved difficult at points: Kysenius says a few character designs were scrapped because an outfit made it hard to see the bird’s color. The bigger issue was condensing a two-hour movie into a dozen or so images that wouldn’t bloat the game’s file size. Kysenius sketched the most iconic moments – along with captions like “Now I am the master!” – for Gecek, who turned them first into vector designs and then into the finished pieces that appear in the game. His personal favorite is a shot of the Mos Eisley cantina, where “they’re all huddled around the table and Chewbacca is drinking from this little sippy cup… This one, because of the lighting, made me go back to the ones previous to try and bring it up to [this] level.”

Perhaps surprisingly, Gecek isn’t a die-hard Star Wars geek. “I’m not an uber-fan,” he admits, though he re-watched the series before starting work and calls it “awesome.” He pointed out that Han shot first in his splash screen, but some sketches tested the limits of his knowledge, at least when it came to the sort of trivia fans love to check. “I got colors of lasers wrong,” he says. “I think I also got a lightsaber color wrong.” In a way, though, this is heartening – as he says, (almost) everybody loves Star Wars, and this iteration of Angry Birds is more a clever mashup than a piece of canon. 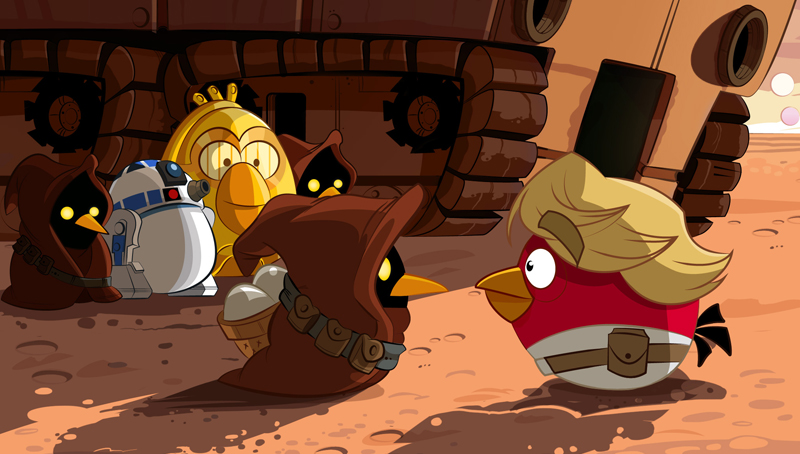 With Angry Birds Star Wars, Rovio has paved the way for other big tie-ins, shooting for the kind of versatility enjoyed by Lego. But while Lego offers a set of open-ended building blocks and stylistic touches, Angry Birds brings its own lore and gameplay: how many times can you re-dress birds to look like Batman or Iggy Pop and fling them at pigs?

For Gecek, that’s not a problem. “My favorite things in cartoons,” he says, “are when they cross over in a holiday episode and you see them dressed as other characters. I love crossovers. So if they do another thing like this, then I’m stoked. I’m in.” Where some might see limitations, he sees the trappings and characters of Angry Birds as a new version of timeless cartoon characters like Mickey Mouse, who trotted through endless settings and media styles. “Mickey’s been in Star Wars, and Mickey’s been in a bunch of different things, and that’s what drew me to Rovio,” he explains. “It has something that’s starting to expand a lot bigger than this little mobile game. And that’s really important.”