Propaganda 2.0: why Israel and Hamas are fighting a war with rockets and tweets

The IDF takes to social media in its war on Hamas

Share All sharing options for: Propaganda 2.0: why Israel and Hamas are fighting a war with rockets and tweets

As I write this, I notice Hamas' claim that it has shelled "occupied" Tel Aviv. I hear this not from cable news or The New York Times, or from RT America, the Russian government backed twenty-four hour news network that I have streaming on the Roku across the room. Nor do I learn it from CNN, where Anderson Cooper is busting Sen. McCain’s balls for contesting Hillary Clinton’s possible replacement. No, I learn this from Twitter, which isn’t really worth giving much thought to — until you realize that this tweet comes not from a news outlet, but from Hamas. And another tweet, from the Israel Defense Forces, assures me that, in fact, the Hamas rocket never reached Tel Aviv — "#Hamas propaganda is constantly spreading misinformation," apparently.

The latest Israeli offensive on Gaza is currently in its second day, and if you’re following the events you can get your news from a number of sources. Of course, the usual American news organizations are keeping an eye on the situation, and any major updates will make it onto their newsfeeds. (ABC News, for instance, has placed an item about yesterday’s hit on Hamas commander Ahmed Jabari beneath a story about a baboon that befriended a kitten in a zoo.) For those of you that prefer by-the-minute coverage, the Web 2.0 tradition of "liveblogging" is another alternative. RT America is doing a pretty good job with its effort, while I must admit that I’m a little disappointed by Al Jazeera's liveblog, which has had but one sparse update all night. But the liveblog that captured our attention today is being maintained by the IDF itself.

For updates on #PillarOfDefense, with photos & videos all in one place, check out this blog post: idfblog.com/2012/11/14/liv…

As Reuters points out, the Gaza War of 2008–2009 began in much the same way that the current conflict has, as a response to ongoing rocket fire from Gaza. In December 2008, following a week of air attacks with the name Operation Cast Lead, Israel commenced with a land invasion and a naval blockade. In the end, 1,400 Palestinians and 13 Israelis were killed.

Operation Pillar Of Defense, Israel’s latest attack on Palestinian militants in Gaza, was announced not by a news conference, but on Twitter. The IDF tweeted that it had "begun a widespread campaign on terror sites & operatives in the #Gaza Strip, chief among them #Hamas & Islamic Jihad targets." Nice touch, making sure that Gaza and Hamas were well-poised to trend like that, with hashtags and all.

I think for most of us, reaction to the announcement was visceral: one liveblogs award shows or CES keynotes, not armed conflict. And if you’re going to begin a military operation, a relatively austere press conference — hastily assembled by IDF brass, probably in a hallway somewhere — seems much more appropriate than a tweet. It’s hard to express the proper gravitas when you’re adapting your message to the micro-blogging platform: replacing words with numbers, using ampersands instead of spelling "and" out, and of course hashtags are never anything but undignified.

In addition to Twitter, the Israel Defense Forces’ photostream on Flickr has seen some use. The propaganda on display there includes a slick flyer announcing the hit on Ahmed Jabari, as well as a bizarre graphic labeled "Islamic Jihad Graduation in Gaza" that features a child with a toy M-16 holding several others prisoner in a pretend jail cell. By way of contrast, the IDF hasn’t touched its Instagram account since September of this year. And the IDF has a Tumblr that only appears to be a few hours old. (I was going to make a Pinterest joke here, but a quick Google search reveals that, yes, the IDF has a Pinterest board too.)

There is something very odd and unsettling about a military campaign that is announced much the same way we launched The Verge this time last year. 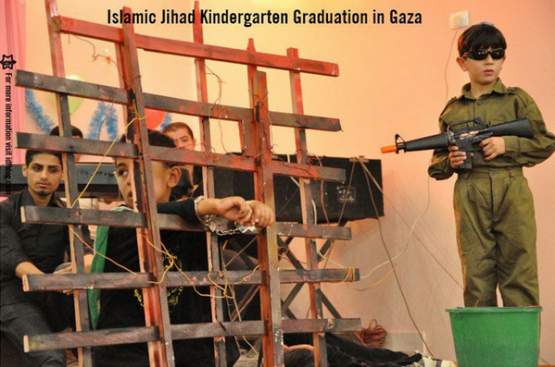 Although it seems somewhat petty in the face of the renewed hostilities — or as Hamas put it in one classic tweet, the opening of the "gates of hell" — the question begs to be asked: is using Twitter for war propaganda a violation of the company's Terms of Service? And make no mistake, this is propaganda. Whatever you think of the IDF, it is spreading this information for political gain. At least when CNN is tweeting something, you can hope that it is fact-checked.

According to "The Twitter Rules," users "may not publish or post direct, specific threats of violence against others." When @IDFspokesperson recommends "that no Hamas operatives, whether low level or senior leaders, show their faces above ground in the days ahead," that certainly sounds like a threat — a cool, understated threat, but a threat nonetheless.

Twitter didn’t immediately responded to a request for comment. Neither did @IDFspokesperson, for that matter. And repeated calls to the Israeli Embassy in Washington, DC went unanswered.

Taking our eyes off Twitter for a moment, Mike Isaac of AllThingsD posed a similar question to a Facebook spokesperson yesterday. The answer he reports is brief, and pretty much what one would expect: "Facebook will not be taking action on the current content posted." 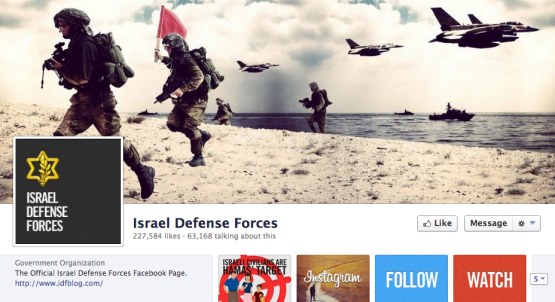 Dave Dilegge is the Editor-in-Chief of Small Wars Journal and the Director of the Small Wars Foundation. Additionally, he’s served as an intelligence officer in the USMC Reserve, a civilian intelligence analyst for the USMC, and he owns a food truck in Tampa’s Old City. In an email last night, Dilegge hit upon the logic behind Israel’s embrace of social media.

"In short," Dilegge says, "I think the Israelis realize that if they leave the narrative to others they will remain, as they have every time in the past, in a reactive mode as others shape world opinion. Will their new approach work? Not sure, but it certainly is a step in the right direction."

The IDF blog and the Twitter feed are obviously an attempt by Israel to control its message, not in the Middle East, but in the English-speaking West. But to what end?

It might be worthwhile to compare / contrast this with our understanding of the Arab Spring and the role of Twitter in protest movements in the Middle East. The value of Twitter — conventional wisdom goes — is that people were speaking directly to each other, unimpeded by the likes of Mubarak, for instance. The truth is definitely a lot more nuanced.

Writing in Foreign Policy in 2010, Golnaz Esfandiari put it bluntly: "There was no Twitter Revolution inside Iran." The article cites a statement made by the manager of a prominent Farsi-language website: "[T]here is lots of buzz. But once you look, you see most of it are Americans tweeting among themselves."

And another Foreign Policy article from the following year drives the point further home:

Deen Freelon, a Ph.D. candidate at the University of Washington, assembled a massive database of nearly 6 million tweets on the protests in seven Arab countries: Algeria, Bahrain, Egypt, Libya, Morocco, Tunisia, and Yemen. What he found when he filtered the data by location was that Twitter was overwhelmingly a platform for outsiders to discuss big breaking news, be it Mubarak's resignation, one of Muammar al-Qaddafi's insane rants, or the start of a major protest.

— Blake Hounshell, "The Revolution Will Be Tweeted"

In other words, while Twitter is a quick and easy tool for dissidents worldwide, it’s also an echo chamber, one that gave the English-speaking world the assumption that big things were happening in the Middle Eastern blogosphere during the Arab Spring, when in reality the important things were happening on the streets. The extent to which social media helped people organize in Egypt and Tunisia is possibly quite large. But I would wager that the extent to which social media helped people in the US talk to each other about the Arab Spring is even greater.

Sure, the IDF is announcing airstrikes the same way that The Voice announces its winners. And while this is weird and amusing and perverse, merely making a note of it and moving on misses the point. The conversational "back and forth" of Twitter that we have grown accustomed to only happens when both sides are committed to having an actual, honest conversation. But by reducing Pillar of Defense to #PillarOfDefense, Twitter is taking a large, complicated event and breaking it down into small, constituent parts that have little impact in and of themselves. Just as easily as a grassroots activist group anywhere in the world might use Twitter to communicate the news, @IDFspokesperson is using Twitter to neutralize the news.

By making sure the conversation takes place in this restricted forum, @IDFspokesperson is limiting the possible responses. When I say that the IDF has turned a military operation into a #hashtag, I’m not being cute. I’m saying that it’s transformed an act of war into a social media event. And once #PillarOfDefense has become equal in our mind to #VMA2010 or #YOLO, it will be tough to evoke a stronger response than this:

Which, if you think about it, is a victory on Israel's part.

If you’re in Gaza, however, there’s a good chance you’re not speaking English, and the distinct possibility is that you’re not accessing the internet at the moment, so none of this matters all that much. But even in that case, the IDF has a way to communicate with you, too.

Photo: Arabic leaflet dropped over #Gaza urges civilians to "avoid being present in the vicinity of #Hamas operatives" twitter.com/IDFSpokesperso…

In the age of social media, some time-tested methods of communication remain as relevant as ever.

The IDF and Hamas wage a social media war: here's what you need to know