Super T.I.M.E. Force is a video game about time travel, and that means that it has to deal with all of the problems inherent to that premise — most notably the concept of the "temporal paradox." It's an idea that science fiction writers have been struggling with for decades. What if you went back in time and did something — say, accidentally kill your mom — that would prevent you from travelling back in time in the first place? How would that impact the future? For the developers at Capy Games, it's proving to be a unique design challenge for their next game.

The game puts players in the role of an elite soldier in the titular Super T.I.M.E. Force, a group that travels to different time periods correcting what they deem to be mistakes in order to — as Capy writer Dan Vader puts it — "make the present a more kick-ass place to live." The time travel theme isn't just a part of the game's story, though, it also extends to the actual gameplay. Super T.I.M.E. Force is a run-and-gun shooter in the vein of classics like Contra or Metal Slug, but the twist is that each time you die, you'll start the level over again playing alongside a ghost version of yourself. This ghost will play through the level the same way as before, giving you some backup for your next attempt. And this happens each time you die, which can lead to some hectic action on screen, with multiple versions of your character running and gunning at the same time.

"It's not really an issue you can solve, it's just something you have to design around."

It's a mechanic that was interesting enough to catch the attention of Microsoft, who will be publishing the game on Xbox Live Arcade. But it's also one that has caused the developers quite a bit of trouble. It's possible that your actions can affect those of your ghost counterparts, which can screw up the timeline. "That usually results in everybody just dying in weird ways, when they weren't supposed to die," says lead programmer Kenneth Yeung. "It's not really an issue you can solve, it's just something you have to design around."

As an example, Yeung explains how the enemies behave in the game. Instead of having bad guys that will actively aim their guns at your character (as they traditionally do in these sorts of games), Super T.I.M.E. Force features enemies that include preset behaviors that determine their actions. Each time you play the level they'll move and act the same way. This lets the game avoid a potential paradox: if the enemies were to aim at the player nearest to them, for instance, there's the chance that you could be killed by bullets that had already killed one of your ghost selves in a previous timeline.

"It's this ongoing design challenge."

"Maybe the next time you play you get there a bit sooner and the enemy will aim its gun at you and shoot bullets there," Yeung explains. "The problem with that is if you got there sooner there will be enemy bullets that exist in the timeline at a different time than they existed in all the previous timelines, which could result in guys dying." And it's more than just the enemies — everything from moving platforms to interactive objects had to be re-thought in order to keep you from negatively affecting the ghost versions of yourself. "It's this ongoing design challenge to make sure that time paradoxes don't happen." 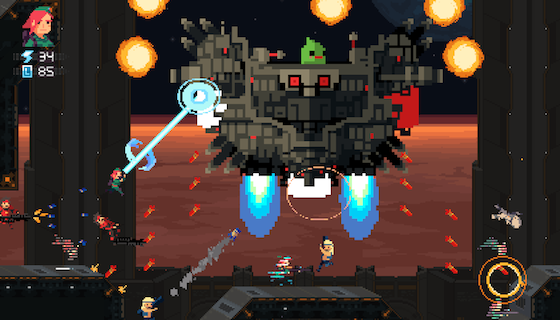 As with any piece of time travel fiction, this challenge extends to the game's story as well. "All the stuff that you read about in science journals or time travel fiction that gives you a headache just to try to wrap your mind around it, actually crops up when you're designing the day to day level stuff, as well as the story," says Vader. Though, unlike with the gameplay, where a paradox can break the game, the story isn't under quite the same pressure to avoid them. It also doesn't hurt that Super T.I.M.E. Force places a strong emphasis on humor, giving the team a bit of extra leeway. "Sometimes we sort of think it through and backwards engineer the joke to see if it makes sense still," says Vader. "And sometimes you have to go, ‘that's video game logic. We're doing that.'"

"Time travel gives us the liberty to do whatever we want."

Super T.I.M.E. Force doesn't have an official release date yet, and the team is keeping relatively quiet about further story details — though early trailers show you travelling everywhere from a sci-fi future to the prehistoric past. It's a game with robots, nazis, and dinosaurs, and the kind of project that lets the team throw out any crazy idea they might have. "Time travel gives us the liberty to do whatever we want, go wherever we want, encounter whatever the heck we want," says Yeung, with Vader adding, "‘We have a time machine and we're doing that' is kind of how we approach it."